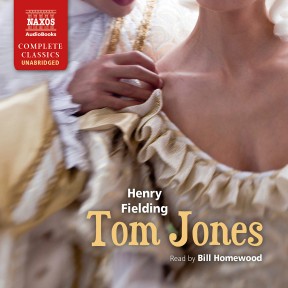 Our hero Tom, a friendly young rogue with a heart of gold, has fixed his heart on the delicious Sophia, daughter of a wealthy landowner. Losing hope, poor Tom finds solace in the beds of a host of beautiful women, at least one of them old enough to be his mother. He leaves a trail of broken hearts behind him, only to discover… but that would spoil the story − you must listen and see! This great English classic is brought to life by Bill Homewood’s lively reading.

Tom Jones follows the life of our hero Tom Jones who has fallen in love with Sophie; but because of his questionable origins, he is not considered a suitable match by her father, a rather disagreeable sort. Fielding, with great wit, meticulously describes Tom’s life, adventures and character, as well as the trials and tribulations of the seemingly star-crossed lovers. Bill Homewood is a great storyteller and this multi-character novel calls on all of his skills to succeed, which it does on many levels. His ability to give a unique voice to every single one of the many characters, and to keep each voice straight and separate is truly a wonder. It is hard to understand how he manages to do it. Evil is so evil in Homewood’s hands and the humour is there too, sly and subtle, but unmistakable. The length of the novel demands an outstanding and dramatic performance and it is hard to fathom a better one. Well known for his appearances in numerous television shows and leading roles in the West End and for the Royal Shakespeare Company, he was a perfect choice for this book. (Reviewer note: I am almost always opposed to abridged recordings, but in this case as the story itself is quite long, the insertion of many tedious side remarks, lots of Latin too, such as a long diatribe on critics, totally unconnected to the story, could have been omitted and never missed.)

The efforts of foundling Tom Jones to win the divine Sophia are thwarted not just by his calamitous susceptibility to so many female charms, but by all manner of misunderstandings, battles, misadventures and Dreadful Accidents. Through these picaresque romps, a twisting plot and a plethora of aptly named characters, including Squire Allworthy and tutor Thwackum, Fielding entertains us with the flaws, but essential goodness, of human nature.

Henry Fielding’s novel is full of comical mishaps and coincidences, boisterous fights, ripe dialogue and enjoyably bawdy scenes. Considered by some to be the first English novel, and in any case respected as one of the greatest, it is certainly one of the funniest. Essentially a morality tale of hypocrisy, heresy and honour, it is set within the context of religious ferment and revolution in eighteenth-century Britain.

Here we have a warts-and-all picture of the morals and manners of eighteenth-century country society, with its squires and gamekeepers, its village wenches, its young gentry and all those ordinary folk caught up in the shenanigans of loving, hunting, partying and surviving. Our hero Tom, a lovable foundling, is adopted by a wealthy landowner, Squire Allworthy. As Tom grows into manhood, he falls hopelessly in love with the beautiful Sophia, daughter of a neighbouring squire. He soon finds himself the victim of jealousy and misfortune, and embarks on a merry-go-round of doomed love affairs. He ventures into courtly society in London and Bath, where the preoccupations, as in the countryside, are wenching, drinking, fighting and the niceties of public display.

Though we generally sympathise with the various hapless women who fall in love with Tom, and for the most part find ourselves able to pardon him for his joyous promiscuity, we nevertheless feel very sorry for his adored Sophia, who loves Tom with all her heart. She is a kindly, forgiving soul, and, of course, extraordinarily beautiful. Fielding is at great pains throughout to remind us enthusiastically of this fact:

Her cheeks were of the oval kind; and in her right she had a dimple, which the least smile discovered. Her chin had certainly its share in forming the beauty of her face… Her neck was long and finely turned… Here was whiteness which no lilies, ivory, nor alabaster could match.

Fielding wins
all the prizes
for euphemism
and metaphor

It seems inevitable that one day Tom and Sophia will find happiness together, but we despair for them, as our author introduces some surprising and brutal turns of fortune: ‘There are a set of religious, or rather moral writers,’ he informs us, ‘who teach that virtue is the certain road to happiness, and vice to misery, in this world. A very wholesome and comfortable doctrine, and to which we have but one objection, namely, that it is not true.’

Satire is the author’s tool, and, as in the work of other great satirists in literature – for example Richard Sheridan, Jonathan Swift, Oscar Wilde, Noël Coward – the satire is not angry or political, but rather affectionate, and even apologetic, for the forgivable foibles and weakness of the human condition. Characters are drawn without hatred, briefly, simplistically but truthfully, with broad strokes of the pen, as in the magnificent satirical cartoons of William Hogarth, James Gillray, and, in our own time, Robert Crumb. At one point in the novel, struggling for descriptive powers, Fielding writes: ‘O, Shakespeare! Had I thy pen! O, Hogarth! Had I thy pencil!’

Fielding pays only lip service to the literary styles of his time; his book breaks new ground with its bawdy, its rich vernacular, its compassion for the wicked, its wit and its honesty. As readers or listeners, we find ourselves drawn into an intimate relationship with the author, rather as if we had met this urbane and brilliant social observer at a cocktail party: ‘Reader, it is impossible we should know what sort of person thou wilt be; for, perhaps, thou may’st be as learned in human nature as Shakespeare himself was, and, perhaps, thou may’st be no wiser than some of his editors…’

Once in his company, champagne in hand as it were, we are much entertained by Fielding’s witty anthropological generalisations: ‘In Italy the landlords are very silent. In France they are more talkative, but yet civil. In Germany and Holland they are generally very impertinent…’

Sometimes the generalisations are refreshingly honest antidotes to the fulsome style of some authors of the day:

Heroes, notwithstanding the high ideas which, by the means of flatterers, they may entertain of themselves… have certainly more of mortal than divine about them. However elevated their minds may be, their bodies at least (which is much the major part of most) are liable to the worst infirmities, and subject to the vilest offices of human nature. Among these latter, the act of eating… must be performed by the greatest prince, hero or philosopher on earth…

When it comes to eating, of course, Fielding dishes up the most celebrated table scene in English literature, immortalised in Tony Richardson’s film of the book, starring Albert Finney and Susannah York. The scene is to be found in Book IX, Chapter V, where the lovers’ dinner is described as ‘a battle of the amorous kind’:

First, from two lovely blue eyes, whose bright orbs flashed lightning at their discharge, flew forth two pointed ogles; but, happily for our hero, hit only a vast piece of beef which he was then conveying into his plate, and harmless spent their force. The fair warrior perceived their miscarriage, and immediately from her fair bosom drew forth a deadly sigh… so soft, so sweet, so tender, that the insinuating air must have found its subtle way to the heart of our hero, had it not been driven from his ears by the coarse bubbling of some bottled ale…

Fielding wins all the prizes for euphemism and metaphor. The hilarious scene ends: ‘…no sooner had the amorous parley ended and the lady had unmasked her royal battery, by carelessly letting her handkerchief drop from her neck, than the heart of Mr. Jones was entirely taken, and the fair conqueror enjoyed the usual fruits of her victory.’