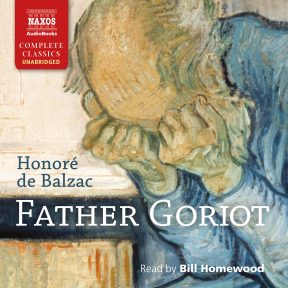 Impoverished young aristocrat Eugène de Rastignac is determined to climb the social ladder and impress himself on Parisian high society. While staying at the Maison Vauquer, a boarding house in Paris’s rue Neuve-Sainte-Geneviève, he encounters Jean-Joachim Goriot, a retired vermicelli maker who has spent his entire fortune supporting his two daughters. The boarders strike up a friendship and Goriot learns of Rastignac’s feelings for his daughter Delphine. He begins to see Rastignac as the ideal son-in-law, and the perfect substitute for Delphine’s domineering husband. But Rastignac has other opportunities too, as the notorious criminal Vautrin, ‘The Death Dodger’, offers to murder the brother of a wealthy woman, giving the ambitious young lawyer a clear path to her fortune… Profound and realistic, Father Goriot is a startling glimpse into the vanity and selfishness of 19th-century Paris. It is considered one of the finest works of Balzac’s La Comédie Humaine.

Bill Homewood’s narration brings new life to the tragic story of Goriot, a father who lives in poverty so that his two daughters can be happy. Homewood’s deep voice and melodic cadence carry the listener through the prose. He pronounces the French names quite naturally, and his vocal characterisations faithfully render Balzac’s creations. Set in a Parisian boardinghouse, the story offers a range of characters from the young law student, who speaks quickly with youthful earnestness, to the hardened criminal, who speaks slowly with acute sarcasm. Homewood portrays Goriot sympathetically, giving him a voice that is somewhat strained and pitiful. However, he always sounds as if he is smiling when speaking of his daughters. Homewood’s profound characterisation of Goriot makes this audiobook particularly memorable.