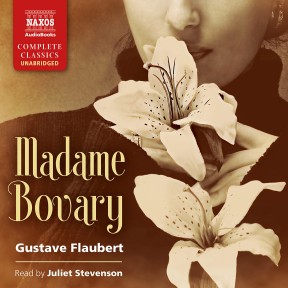 In Madame Bovary, one of the great novels of nineteenth-century France, Flaubert draws a deeply felt and sympathetic portrait of a woman who, having married a country doctor and found herself unhappy with a rural, genteel existence, longs for love and excitement. However, her aspirations and her desires to escape only bring her further disappointment and eventually lead to unexpected, painful consequences. Flaubert’s critical portrait of bourgeois provincial life remains as powerful as ever.

Emma Bovary is portrayed as a born actress wed to the belief that real life lies in a Romantic netherworld far removed from rural Normandy. Among the greatest scenes in Flaubert’s novel are those that cruelly expose her self-deception. And among these the most ingenious takes place at an agricultural show in Yonville, where Emma and a suave man of means named Rodolphe Boulanger, seated at a tall window behind the town square, witness the spectacle of merchants and peasants assembled to hear a regional councillor glorify animal husbandry. While the government official throws bouquets of rhetoric to the crowd, Rodolphe addresses world-weary rants to Emma. The commotion of livestock being judged for prizes serves as an ironic obbligato to the philanderer’s well-rehearsed script. Theatre answers theatre from either side of the square.

All this Stevenson manages with the virtuosity of a quick-change artist, adapting herself to one persona after another: the full-throated functionary, the practiced libertine, the plaintive wife of a country doctor.

Flaubert, who would have preferred a life onstage to the career in law he was expected to pursue, always read his sentences aloud. Stevenson — whose movies include Truly Madly Deeply and Bend It Like Beckham — gives her all, or all that the translation allows, to their worked beauty and expressiveness. Another example is the oblique description, some chapters later, of Emma having sex behind drawn shades in a hackney carriage circling round and round Rouen, to the bewilderment of onlookers. She and her new lover are unseen, but unseen in flagrante delicto, and unheard except for the lover angrily hectoring the coachman to press on. Here as elsewhere, eros travels recklessly. Heeding Flaubert’s metaphoric cues, Stevenson reads the blind journey as a dirge timed to the beat of horses’ hooves and conducted by a death wish. The scene harks back to the agricultural show, only one or two harvest seasons past in her neighbours’ calendar, but long enough ago for Emma to have descended from the Romantic stage to a harlot’s mobile boudoir. The audience – now facing her – still sees nothing. Animals still attend her love life. She is fallen, still cherishing dreams of elevation.

Emma Bovary pays a hideous price for her doomed yearnings for unbridled passion and escape from her dreary husband, but the novel is as much a portrait of a provincial doctor’s life in nineteenth-century France: the operation on Hippolyte’s club foot that ends in gangrene; the blind beggar’s red flesh caught by the coachman’s whip; the ugly gossip; little Berthe Bovary ending up as a cotton worker… Juliet Stevenson makes us feel Flaubert’s sympathy for them all.

Gustave Flaubert was born in 1821 in Rouen. He was the younger son of a doctor and at eighteen was sent to study law in Paris. Ill health forced him to abandon his studies, but Flaubert was not disappointed to be able to return home to live with his widowed mother at Croisset where he spent his life writing. He died in 1880.

For Flaubert, writing Madame Bovary was an attempt to compose a novel more perfect than any other. His aim was to create a style of prose as ‘unchangeable’ and rhythmic as poetry in order to express a new level of psychological truth. Flaubert thus set to revolutionise the form of the novel, striving, as he put it, ‘to give psychological analysis the rapidity, clarity and passion of a purely dramatic narration’.

It proved
to be a
huge
commercial
success

Flaubert began writing Madame Bovary in 1851. He wrote much of the book in seclusion at his family estate in Croisset. Here he could be ‘alone like a hermit and as tranquil as a god’. His daily routine would consist of rising at noon, taking meals with his dog, smoking fifteen pipes a day, and going to bed at four in the morning. Yet even such practices couldn’t hide the agony of writing. Unable to remain distanced from the situations he was trying to evoke, Flaubert would often go into strange fits, calling out and shouting as he wrote. In a letter to his lover Louise Colet, he described how, when composing the scene of the agricultural fair, he was so engrossed in the action, and was shouting so loudly, that he feared that he, like his heroine, might suffer an attack of nerves. Such emotional engagement meant that work was slow, with days spent over single sentences and weeks over pages.

On October 1st 1856 the first instalment of the book was published in Maxine du Camp’s Revue de Paris. There was immediate uproar, as subscribers were outraged by Flaubert’s new commitment to truth and stylistic accuracy. Could such a woman as Emma exist in beautiful France, they demanded. Cuts had to be made including the scene where Emma and Léon ride around Rouen in a hired cab indulging in indiscreet passions. Yet despite these cuts, Flaubert was summoned before an investigating magistrate and informed that he was subject to indictment for transgressing against morality and religion. The most serious charge was that he had written a mockery of the holy sacrament by introducing the raucous song of the blind beggar that is heard over the sound of Emma’s last rites.

After an impassioned defence by his lawyer Jules Senard, Flaubert was eventually acquitted. The court was forced to recognise the book’s seriousness and the fact that the passages in question were consistent with the individual characters. The trial, however, made the book notorious across France. When Michael Levy finally published it in full in 1857, it proved to be a huge commercial success. The book sold thousands of copies across Europe with the alleged result that in Hamburg cabs hired by courting couples were called Bovarys.

The success of Madame Bovary meant that Flaubert had realised his aim of creating a beautiful and sensitive style that could encompass a new degree of honesty. ‘Everything one invents is true,’ he wrote to Louise, ‘my poor Bovary, without a doubt, suffers and weeps in twenty French villages at the same time, at this very hour.’

She does so still.