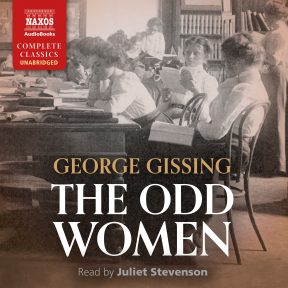 ‘What is more vulgar than the ideal of novelists? In real life, how many men and women fall in love?’ So says Rhoda Nunn, George Gissing’s formidable heroine. Through a gripping and thought-provoking story, Gissing presents the reality for Victorian women: a society in which marriage is judged to be the only acceptable way forward. His perspective is strikingly sympathetic for its time, and as such the novel has an exhilarating freshness far removed from the contemporary sentimental romantics. The young Monica Madden cries for two days before her marriage to Edmund Widdowson; the ensuing claustrophobia, which opens the door for the more desirable Bevis, contrasts with Rhoda’s independence – yet Rhoda’s own principles are tested when she falls in love rather by accident… The Odd Women is a remarkable book, ultimately optimistic in its hope for a societal shift that will benefit both men and women alike.

At the end of the 19th century there were half a million more women than men. The resultant many thousands of single ‘odd women’ lived weary ‘half-lives’ in boarding houses, working 13-hour days in drapers’ shops like Monica, or were confined as companions to elderly ladies, finding themselves on the street when the ladies die; Bella poisons herself when she loses her position; Virginia starves herself of food to afford the cheap gin to which she has become addicted.

Gissing’s own two disastrous marriages to working class women permeate his representation of marriage. The two strong single women Rhoda and Mary disdain young girls’ determination to marry in order to escape this seeming ‘half-life’; together they run a charitable group teaching young women life skills such as typing, which will enable them to make fulfilling contented lives of the mind for themselves, independent of husbands and what Rhoda calls the ‘shame’ of marriage. The ideal marriage of intellect and mutual respect remains an unattainable ideal. The only happy marriage in the novel is a mere footnote in the story: but even the Micklethwaites living contentedly with the wife’s blind sister have achieved their domestic happiness only after 20 years of waiting to marry until they were ‘worn’ and ‘lined’, all for ‘want of money’.

The main focus is on Monica, at 21 the youngest of three worn-down, parentless sisters eking out their working half lives on 3/6 a week for food. Determined to escape this grim future, Monica accepts the unhealthily persistent and possessive Mr Widdowson whom she doesn’t love and is twice her age, but who owns a house in Herne Hill. Life following the ‘gloomy’ and ‘bloodless’ marriage ceremony is predictably tragic and painful, a microcosm of many such misallied marriages.

There’s a great deal more in the other complex strands of the novel as Gissing plays out the issues facing this particular class of women at this time bound by social position, convention and money (or the lack of it) struggling to make meaningful and tolerably happy lives for themselves.

It all sounds rather bleak, but Gissing tackles issues live today even though society has changed, and the whole is engrossing, insightful and powerful – and beautifully read by Juliet Stevenson.

When it comes to performing a wide variety of audiobooks, Juliet Stevenson is an expert. Her lovely, clipped accent and fervent delivery typically bring all types of complex stories to life. This title is no exception, for Stevenson’s rich voice and compassionate tones animate the text nicely. Stevenson offers an excellent narration, and listeners will certainly enjoy her vocal agility and lively style.