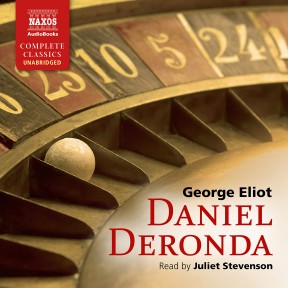 Following a chance meeting at a gambling hall in Europe, the separate lives of Daniel Deronda and Gwendolen Harleth are immediately intertwined. Daniel, an Englishman of uncertain parentage, becomes Gwendolen’s redeemer as she, trapped in a loveless marriage, finds herself drawn to his spiritual and altruistic nature. But Daniel’s path is set when he rescues a young Jewish woman from suicide… Daniel Deronda, George Eliot’s final novel, is a remarkable work, encompassing themes of religion, imperialism and gender within its broad scope.

It’s difficult to overstate the quality of this work. The precision with which narrator Juliet Stevenson brings each character to life is impressive. Each of them – the long-suffering Gwendolyn, the singular Mirah, even the altruistic Daniel himself – lives as a distinct personality in the telling of the story. Listening to Stevenson, one notes that the effectiveness of her presentation is due in large part to her understanding of George Eliot’s work. Far from being a story of star-crossed lovers, the novel explores the trappings of desire, consequences, and Victorian England’s reception of those of the Jewish faith. Stevenson’s thoughtful treatment of the audiobook’s emotion and commentary merits the 36 hours it spans, even for those already familiar with Eliot.