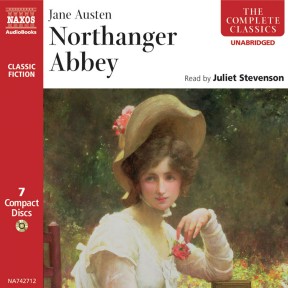 When Catherine Morland, a country clergyman’s daughter, is invited to spend a season in Bath with the fashionable high society, little does she imagine the delights and perils that await her. Captivated and disconcerted by what she finds, and introduced to the joys of ‘Gothic novels’ by her new friend, Isabella, Catherine longs for mystery and romance. When she is invited to stay with the beguiling Henry Tilney and his family at Northanger Abbey, she expects mystery and intrigue at every turn. However, the truth turns out to be even stranger than fiction…

In the late 1700s, romantic gothic fiction was a popular genre epitomised by Ann Radcliffe’s The Mysteries of Udolpho, which involved a beautiful heroine who suffers mental torture at the hands of her aunt’s husband in his ruined castle. Writing a few years later, Austen presented herself as the literary equivalent of Dawn French and mocked Radcliffe’s work with her own version, Northanger Abbey. This satire laughed at the idea that all young girls were beautiful and good-natured and all large buildings imposing and full of mystery. Juliet Stevenson conveys all the irony that Austen intended in her work, and this is a wonderful testament to one of her less appreciated novels.

Northanger Abbey is the exuberant lesser known child of Jane Austen’s oeuvre. Even though it was her first novel to be completed and sold in 1803, much to Austen’s bemusement it was never published and languished with Crosby & Co for thirteen years until she bought it back for the ten pounds that the publisher had originally paid. It was finally published posthumously together with Persuasion in late 1817. If its precarious publishing history suggests it lacks merit, I remind readers that in the early 1800’s many viewed novels as lowbrow fare and unworthy of serious consideration. In “defence of the novel” Austen offered Northanger Abbey as both a parody of overly sensational Gothic fiction so popular in the late eighteenth-century and a testament against those opposed to novel reading. Ironically, Austen pokes fun at the critics who psha novel writing by cleverly writing a novel defending novel writing. Phew! In a more expanded view it is so much more than I should attempt to describe in this limited space but will reveal that it can be read on many different levels of enjoyment for its charming coming of age story, astute social observation, allusions to Gothic novels and literature, beautiful language and satisfying love story. I always enjoy reading it for the shear joy of its naïve young heroine Catherine Morland, charmingly witty hero Henry Tilney and the comedy and social satire of the supporting characters.

It is believed that Jane Austen wrote many of her first works for the entertainment of her family and would read them aloud for their opinion and enjoyment. It is not hard to imagine that Northanger Abbey was presented to her family in this manner. The language and phrasing lends itself so freely to the spoken word, almost like a stage play, that I was quite certain that an audio book would be a great enhancement to the text. Add to that the talent of a creative narrator and you have a great combination for several hours of entertainment ahead of you. I adore audio books and listen to them in the car during my commute to work. This Naxos AudioBooks recording is read by the acclaimed British stage and screen actress Juliet Stevenson whose performance as the acerbic Mrs Elton in the 1996 movie adaptation of Jane Austen’s novel Emma was amazingly as outrageously funny as Austen’s insufferable character. Stevenson’s reading did not disappoint and far exceeded my expectations. She added just the right amount of irony and humor to the reading that I was never in doubt that it is a burlesque of campy Gothic fiction or other overly sentimental novels popular in Jane Austen’s day. Her choice of characterizations was imaginative and captivating. Hearing her interpretation of the emptiness of Mrs Allen and her frivolous distinction for fashion, Isabella Thorpe and her shallow endearments, and Henry Tilney with his knack for reading and adapting to different personalities with wit and charm, I have a deeper appreciation and understanding of the novel and recommend it highly.

‘And what are you reading, Miss — ?’ ‘Oh! It is only a novel!’ replies the young lady, while she lays down her book with affected indifference, or momentary shame. ‘It is only Cecilia, or Camilla, or Belinda’; or, in short, only some work in which the greatest powers of the mind are displayed, in which the most thorough knowledge of human nature, the happiest delineation of its varieties, the liveliest effusions of wit and humour, are conveyed to the world in the best–chosen language.” Ch 5

Austen’s parody of a gothic novel gets an elegant reading to match its elegant prose. Sheltered Catherine Morland goes to fashionable Bath with a wealthy neighbor and discovers society and love. Juliet Stevenson gives each character a unique voice – the duplicitous Isabelle; Catherine’s suitor, Henry Tinley; and Catherine’s vacuous hostess – and invests each conversation with energy and importance. At the same time, as Austen, Stevenson steps back and comments on gothic heroines and Catherine’s failures at becoming one. The delivery of Henry’s fanciful description of the Abbey as a dark and mysterious place is a mini-classic in itself. Those who love Austen’s fiction will appreciate this classy production.