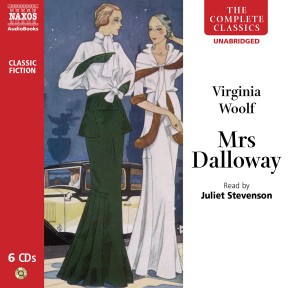 It is a June day in London in 1923, and the lovely Clarissa Dalloway is having a party. Whom will she see? Her friend Peter, back from India, who has never really stopped loving her? What about Sally, with whom Clarissa had her life’s happiest moment? Meanwhile, the shell-shocked Septimus Smith is struggling with his life on the same London day. Luminously beautiful, Mrs Dalloway uses the internal monologues of the characters to tell a story of inter-war England. With this, Virginia Woolf changed the novel forever.

Virginia Woolf’s modernist classic, Mrs Dalloway, is an iconic description of Post World-War I London. Its honesty is poignant. Stoic exteriors and rigorous social standards are depicted as convenient facades for disillusioned and fretful internal monologues. Frequent flashbacks and stream of consciousness storytelling give listeners insight into the characters’ need to repress their fears and concerns in order to force a sense of order on a cruel world. Juliet Stevenson, a leading actress in the UK, expertly performs the novel. If Claire Dalloway, herself, were to speak these words, they would sound no different. The tension, worry, and desires of the characters’ thoughts are magnified by Stevenson’s intonation. It is a truly pleasurable, outstanding listening experience.

Virginia Woolf was a miracle of self-invention and survival. She fought the abuse (literal and figurative), repressive expectations and old-fashioned prejudice of her familial circle to become one of the most significant editors, publishers, writers and stylists of the 20th century. Her mother, Julia Prinsep Jackson, was a widowed mother of three, a noted beauty, and model for members of the radical painting group the Pre-Raphaelite Brotherhood. Her father was Leslie Stephen, himself a literary figure, member of a famously liberal family, widower of one of Thackeray’s daughters (with whom he had a child, Laura), and host to some of the most significant cultural people of his time. While this should have been an ideal background for a future lady of letters, it was an alarmingly dysfunctional family. Virginia suffered abuse from at least one of her step-brothers, a cousin also abused her, and her father’s influence – she was to say later – was such that if he had lived, she would hardly have been able to write. She was probably involved in a homoerotic relationship with her full-sister, Vanessa, too.

This deep complex of personal traumas naturally left its mark on her personality and her writing, although in generally sublimated form. Despite several nervous breakdowns and lengthy spells of illness, she managed to write criticism, essays, journals, diaries, short stories and novels throughout her life. Her response to some of the social standards of her time was more direct: before she married she owned a house which took several male lodgers, she published works which others would not take on, she was an outspoken pacifist and she conducted a lesbian affair over several years, for just a few examples. In short, rather than bow to the intolerable pressures of her emotional world or the equally intolerable ones of the society she lived in, she defied them with extraordinary strength and an imagination of astonishing individuality.

A picture of
inter-war
England
expressed in
language that
is nearer poetry
than prose.

Her half-sister, Laura, was mentally unstable and was institutionalised in 1891. Virginia was also profoundly affected by the sudden deaths of her mother and half-sister Stella, and suffered the first of her nervous breakdowns in 1897. She herself was briefly in an institution after her father’s death in 1904, and continued to suffer from the effects of some kind of severe mental disruption throughout her life. She referred to herself as mad, would suffer delusions, hear voices and see things. But whether this was a type of bipolar disorder, a consequence of the repressions and abuse of her youth, or a reaction to being treated as if she were mad when she was merely unpredictable or non-conformist is still a matter of great uncertainty and dispute. Whatever the root of it, and whether or not Virginia had an illness or a mental instability that could be diagnosed, her imagination and intelligence enabled her to create a new form of the novel.

She went to university at Cambridge, continued her studies in London, and in 1912 married the writer, political thinker and civil servant Leonard Woolf. She had been writing articles for The Times Literary Supplement for some years, and teaching, too; but in 1917 the two of them set up their own publishing house, The Hogarth Press, which published T.S. Eliot and Katherine Mansfield, among others, and which by the early 1920s had become a business rather than a hobby.

Woolf’s first two novels were in relative terms conventional. But thereafter she challenged almost every aspect of the novel – the form, the expectation of the reader, the nature of story, authorial perspective and narration. Jacob’s Room (1922) established in a novel the experimental ideas she had shown in her short stories, but with Mrs Dalloway (1925), To the Lighthouse (1927) and The Waves (1931) she created masterpieces of imaginative fiction. The standard pattern of storytelling is subverted. In Mrs Dalloway, essentially the only thing that happens is that the heroine gives a party. But the greatness of the work lies in its expressing fluidly and accurately the thoughts of the characters and their internal lives; and in linking the various protagonists through their actions and imaginations. This process, which could become self-obsessive and self-indulgent, in fact created a picture of inter-war England through its discussion of the class system, the Empire, sexual identity, madness, the medical establishment, and much more – all of it expressed in language that is nearer poetry than prose.

There are unquestionably auto-biographical elements to the book. The delusions of Septimus Smith are similar to those that Woolf herself suffered, and she also once threw herself from a window; the homoerotic feelings of Mrs Dalloway towards Sally, and those possibly felt by Doris Kilman for Elizabeth, even Septimus for his friend Evans, mirror Woolf’s own ambiguous sexuality. Her experiences of the medical profession are reflected in their presentation here – as being smug, unlistening, quick to offer pat solutions to issues they don’t understand, almost predatory, cocooned and wealthy. But there is also a deliberate literariness, an attempt to reconfigure the novel’s form in conformity to a broader moral conviction that the internal life is more significant than the external one. The events that have traditionally moved a plot forward are here seen as merely the end-points of a more complex, intangible and ultimately more meaningful journey through the thoughts of the protagonists. People’s lives, their sense of themselves and how they stand relevant to others are created by their thoughts and imaginings. There is a greater sense of connection to these characters because of the access to their inner selves, whether vain or deluded or honest or innocent. Woolf’s insights into the personal and social are as startling, illuminating and precise as her language.

Virginia Woolf committed suicide in 1941, filling her coat pocket with either a big stone or several stones and walking into the River Ouse near her home in Sussex. She and Leonard had had a suicide pact in the case of a German invasion (he was a politically active Jewish intellectual, and they both knew what that would mean if the Nazis arrived), but for all the immediacy of the war and the destruction of their London home in the bombings, and despite the disappointments over her most recent book, the most likely cause of her suicide was the intensity of her depression. It was the sort of thing she had gone through several times in the past; but this time, it was too much, the fight too big. Having so assiduously created herself and her life, it was perhaps inevitable that she should decide on the fact, the means and the method of her death.