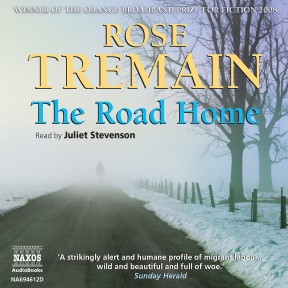 Winner of the Orange Broadband Prize for Fiction 2008, The Road Home is the best-selling story of Lev, a middle-aged migrant from Eastern Europe, who moves to London in search of work after losing his wife and job. Lev’s London is awash with money, celebrity and complacency. The world Tremain creates is both convincing and poignant.

Novels about economic migrants don’t have to be as desolate as Steinbeck or as farcical as Marina Lewycka. Somewhere between The Grapes of Wrath and Two Caravans there’s room for a story like this one about Lev, whose job at the sawmill in a small eastern European village has gone (no more trees), so he has bought a bus ticket to England to look for work. It’s bad – Lev’s beautiful young wife has died; in London he’s paid a fiver for a day’s work posting flyers; and the news from home is that a new dam is about to obliterate his village – but it could be worse. He finds work, a friendly landlord and a sexy girlfriend, and his new mobile phone keeps him in touch with his irrepressible buddy, Rudi, at home. You know you’re in safe hands with a writer as professional as Rose Tremain – this won the 2008 Orange prize – and a reader as sympathetic as Juliet Stevenson. Maybe that’s the trouble: it’s funny and touching – but a bit too safe, not quite edgy enough. Still worth reading, though.

Juliet Stevenson’s performance of The Road Home is nothing short of astonishing. Tremain’s protagonist, Lev, emigrating from an Eastern Bloc country to work in the UK, speaks with a Slavic accent. In his homesick struggles to survive in a foreign culture completely different from his expectations, he meets people with Qatari, Irish, posh-Brit, old-lady, drunk-man, Chinese, Cockney, and young-girl voices. Stevenson renders each so impeccably, and makes them so distinct in timbre and personality as well as accent, that you utterly lose track of the fact that it’s all created by one actor. Most of all, she delivers a moving story of one immigrant who occasionally does unwise or dopey things but never loses our interest or sympathy. Cause for celebration.

Winner of the 2008 Orange Broadband Prize for Fiction, this latest book by Tremain (The Colour) is the story of widower Lev, an economic migrant who travels from the Eastern Bloc to London to find work to support his child back home. Actress/narrator Juliet Stevenson’s (To the Lighthouse) distinct rendering of each character gives this recording the feel of a full-cast production. Listeners who enjoy Anita Brookner and literary fiction will be moved by this realistic portrait. Highly recommended. The Little, Brown hc was recommended as ‘a worthy addition to the growing body of work centered on the loneliness and frustration of the immigrant experience.’