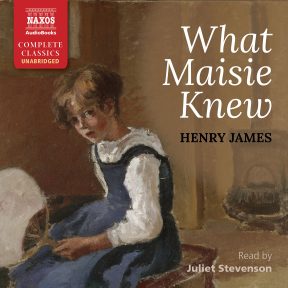 Following a violent and messy divorce, young Maisie Farange floats back and forth between her parents, Beale and Ida, who use her as a weapon to torment each other in their ongoing, internecine war. Eventually the parents both remarry, and it becomes clear that the new spouses care more for Maisie than her own parents. Beale and Ida soon embark on a series of extramarital affairs, leaving Maisie in the care of the new stepparents, who begin their own affair with each other. What Maisie Knew is a remarkable tour de force from James’s late-middle period, and an insightful look at the psyche of a child who is thrust into the adult world of drama and failed relationships.

Juliet Stevenson provides a compelling narration of Henry James’s story about innocence, social class and morality. The protagonist, Maisie, struggles to preserve her innocence when her parents divorce and her stepparents commit adultery. Seemingly effortlessly, Stevenson changes her voice to match her characters’ traits: Maisie’s innocent demeanour, her stepfather Sir Claude’s confident poise, her stepmother Ms Overmore’s patronising personality, her nanny Mrs Wix’s didactic disposition, and her parents Ida’s and Beale’s narcissistic attitudes. Stevenson’s pace is slow and steady – in harmony with every moment. However, even with her elegant English accent, her performance is challenged by the author’s long sentences. Overall, though, Stevenson’s pleasant narration makes James’s complex and long-winded novel an auditory treat.

‘The muddled state… is one of the very sharpest of the realities.’ What Maisie Knew is one of the shortest and most engaging of James’s novels, and has a plot well-suited to the divorce-prone world of modern marriages. Maisie’s parents follow their acrimonious divorce first with quarrels, then with new partners, who turn out to be rather better at caring for her, then fall in love with each other. Maisie emerges as full of charm and verve, struggling to make sense of adult betrayal as her eyes are opened to their complacent and profoundly selfish lives. Husky-voiced, patient and alert to every nuance of James’s carefully crafted prose, Juliet Stevenson narrates superbly in this audio version, released this month.