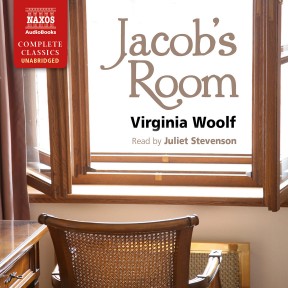 Published in 1922, the same year as Ulysses and The Waste Land, Jacob’s Room is Virginia Woolf’s own modernist manifesto. Ostensibly a study of a young man’s life on the eve of the Great War, it is really a bomb thrown into the world of the conventional novel, as she attempts to capture the richness and randomness of life’s encounters. Jacob Flanders is a mere point of contact between a crowd of people, appearing and disappearing in a tableau in which all is flux, without certainty and without a controlling viewpoint. But it seems that the author could not maintain this rigorous impersonality, and the radical technique breaks down, so that we finally see Jacob as a person, just as his world is blown apart.

Jacob’s Room, a classic modernist text, is more about language and the art of fiction than it is actually a story, which means the narrator has to be as alive to the pleasure of the exact right word as a thriller narrator is to the power of a car bomb. Juliet Stevenson is a perfect actor for the challenge. Her voice is lovely, her diction clean and precise, and she is so sensitive to nuance, to the rhythm of Woolf’s sentences, that she communicates her own excitement at Woolf’s achievement in a way that delights and even instructs. There is much beauty here, owing equally to Woolf’s art and Stevenson’s, and the ending is indelibly moving.

The key to an understanding of Virginia Woolf’s work is the concept of ‘the inner life’. This was the quest that haunted her throughout her career as a writer of novels – not to make up stories, but to capture in language what it felt like to be alive. She herself was gifted with an artist’s eye for physical reality, she was deeply sensitive to human emotion, and she was alert to every social and intellectual nuance. She was also steeped in literature, the ways in which literature has been used to reflect human experience, and she conceived a profound discontent with all of it. In her very first novel, The Voyage Out, she put these words into the mouth of one character: ‘I want to write a novel about silence […] the things people don’t say; but the difficulty is immense.’ And again: ‘We want to find out what’s behind things, don’t we? Look at the lights down there […] scattered about anyhow. Things I feel come to me like lights… I want to combine them… ’ ‘The strange thing about life,’ she remarks in one of her books, ‘is that, though the nature of it must have been apparent to everyone for hundreds of years, no one has left an adequate account of it.’

To give such an account became her great goal, but in order to do so, she believed that she must free the novel from the tyranny of realism and plot, for these things meant the artificiality of the all-knowing narrator, the puppet-master manipulating his marionettes. What she wanted was experience, life as it is lived, the tangible sense of the unique, individual person isolated in space and time, while interacting with sights and figures in the streets, listening to music, arguing with friends, surviving a dinner party, imagining oneself in love, or grieving in solitude. It was these things, when understood and captured in words, that measured the inner life, that marked – in one of her characteristic phrases – those ‘moments of being’ which alone defined who one was. Her quest extended through ten novels written over almost thirty years, each one experimental in its way, each one different from the last, and each one a new attempt to realise these painfully elusive ideals.

It is
in fact
the most
experimental
of all
her novels

Virginia Woolf (1882–1941) was the daughter of the great Victorian man of letters, Sir Leslie Stephen, and she grew up in an elite world of writers and intellectuals, knowing everyone who mattered in literary London. She was precociously intelligent, but neither this nor her privileged background saved her from childhood traumas – the deaths of her dearest relatives, and years of emotional torment at the hands of her stepbrothers. Before she was twenty she had fallen victim to the mental illness which would pursue her intermittently throughout her life, and she was left with a deep ambivalence about love and sexuality, which left its mark on much of her fiction. Her first novel, the long-gestated The Voyage Out was published in 1915, three years after her marriage to Leonard Woolf. For her this was a saving relationship which outlived immense difficulties, and without which she might not have survived at all. She became the central figure in the Bloomsbury Group of writers and artists, who were avant-garde and controversial in their creative and personal lives. She was a pioneer of feminism and advocated writing as a great liberating pathway for women. Although their novelty was disliked by many, by the late 1920s her books were recognised as important and original works of modernism. The task of writing her novels always left her psychologically drained, and prey to nervous illness. During the early phase of World War Two, after finishing Between the Acts, while living in Sussex in the path of the German bombers, she sensed that her mind was again giving way and she ended her own life.

Jacob’s Room was her third novel, published in 1922. It marked a radical new departure in her style and it is in fact the most experimental of all her novels. We have several clues to its genesis, but perhaps the most significant was the hostile review of her previous book, Night and Day, written by Katherine Mansfield, whom Woolf had considered her friend and her confidant. After describing the conservative, inhibited, elitist Edwardian world which Night and Day inhabited, Mansfield went on: ‘We had thought that this world had vanished for ever, that it was impossible to find on the great ocean of literature a ship that was unaware of what had been happening. Yet here is Night and Day, fresh, new and exquisite, a novel in the tradition of the English novel. In the midst of our admiration, it makes us feel old and chill. We had never thought to look upon its like again.’

Woolf was stung by this review, but recognised that it was at least partly justified, and resolved that her next novel would mark a decisive advance. Jacob’s Room does that, and with a vengeance. Here Woolf takes for her subject the randomness of life’s encounters. Each day, a hundred times each day, we meet and interact with people who then vanish from the scene; and we in turn are one of the multiple figures whom other people encounter, and then we in turn vanish from their lives, back into the inexorable flux of life. Woolf takes a young man, Jacob Flanders, and represents him as a mere point of contact between other people. Time and time again we see him not as a character in a story, but as a mere feature in the lives and thoughts of others. He is a still centre around which the confusion of life revolves. Characters and settings pass like a cavalcade before our eyes, all somehow connected with Jacob, but telling us almost nothing about him. The effect is completely disorientating and we realise that Woolf is making a radical attempt to explode the conventional novel, to evoke the unpredictable flow of life in a style that is freed from logical, sequential narrative. We are reminded of experimental movements in art, such as cubism, in which the components of a subject are isolated, jumbled and re-arranged, so that we are distanced from conventional images of reality. Instead of telling us about Jacob’s life as a novel would normally do, we have a novel about the absence of all such knowledge, the absence of narrative, and the absence of certainty.

At least this is how the book works for its first half. Then at its central point, whether by accident or design, a narrative thread suddenly burst into flame. We gather that Jacob is conducting an affair with a woman who is probably a prostitute. No word of moral judgement is uttered, by the narrator or anyone else. Then a letter arrives from Jacob’s loving mother in the north of England. The letter is placed on the table in Jacob’s rooms and the woman arrives. The bedroom door closes behind them. In the living room is the letter, the symbol of his original, youthful identity and innocence, while in the bedroom there is a man who has outgrown that identity. Still no moral lesson is pointed. But a few hours afterwards, walking in the streets of London, Jacob sees her ‘turning up Greek Street upon another man’s arm.’ He is struck motionless as if turned to stone and ground to dust; we realise how deeply in love he is. This is an astonishing moment, a moment when it seems as if all the pent-up forces of confusion and impersonality in the novel are swept away, all the reader’s latent desire for action, for narrative and meaning are satisfied – and perhaps the author’s desire too. From this point, Jacob does form the centre of the story. True, we are still kept distant from his character in the usual sense, but he has become a living being, and his story now moves through recognisable stages, places and relationships.

And then all is withdrawn again. Suddenly armies are moving, battleships are moving, statesmen speak their grave and terrible words like hideous automata, papers are signed, and a new history begins to unfold. We turn the final page and find Jacob’s mother and his close friend looking around his untidy, now-empty room, wondering what to do with his things, for he has been killed in France. Now we see the symbolic significance of his surname: this is Woolf’s oblique but devastating verdict on the Great War. Jacob’s life, like hundreds of thousands of others, had scarcely begun, and now it has been snuffed out. The flux of life is fulfilled in death.

Does this difficult novel really work? That is a matter of opinion. It very clearly highlights the old artistic problem of evoking disorder, unreason and chaos, without itself becoming chaotic. I think that Woolf herself found it impossible to write an entire novel without succumbing to the artist’s greatest desire – to bring order out of chaos, form out of formlessness. Here she first tore up the restrictions of the conventional novel, but then she permitted elements of emotional realism to return. Through the balance thus achieved, she was able to move on to her mature triumphs in a new and more humane form of fiction.