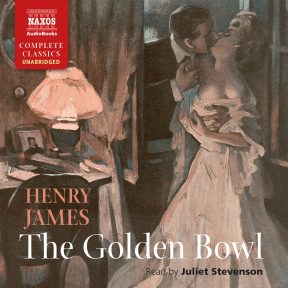 Wealthy Maggie Verver has everything she could ever ask for – except a husband, and a title. While in Italy, acquiring art for his museum back in the states, Maggie’s millionaire father Adam decides to remedy this and acquire a husband for Maggie. Enter Prince Amerigo, of a titled but now poor aristocratic Florentine family. Amerigo is the perfect candidate. Delighted, Maggie then reciprocates by choosing a partner for her widower father: childhood friend Charlotte Stant. The stage is set, and what unfolds is a deep and gripping exploration of fidelity and the politics of love and marriage. Published in 1904, The Golden Bowl displays Henry James at his finest: James weaves scene upon scene, set piece upon set piece, into a seamless whole, through a richly dense tapestry of beautiful, flowing prose. Along with The Ambassadors and The Wings of the Dove, it constitutes James’s final and most rewarding phase as a novelist.

Adam Verver, collecting art in Italy with his daughter, Maggie, also acquires a husband for her: Prince Amerigo, from a titled but now poor Florentine family. To return the favor, Maggie decides her father has been single too long and proposes he marry her best friend, Charlotte. Neither Verver counted on the previous liaison between Charlotte and Amerigo, which now complicates both marriages. Navigating the intricacies of James’s sublime prose and twisted tale of love and infidelity is not for the faint of heart. Stevenson possesses an almost magical ability to untangle James’s beautiful but dense text, sorting out complex sentences and allowing meanings to emerge. Conflicts among the cast are revealed, not through anger and raised voices but in polite conversations with civil words that belie true emotions. Stevenson reflects the dark power of these strong emotions as they simmer. The final confrontation between Maggie and Charlotte shimmers with tension and barbed retorts. Stevenson’s narrative skill lies in her ability to imbue complex text with real emotion and flawlessly interpret James’s words and tone. Her ability to delineate characters is always on display, and her cultured tones and exquisite phrasing match the sophistication of James’s cast. The seductive power of James’s writing is fully realised in Stevenson’s rewarding performance.

Award-winning actress Juliet Stevenson guides the listener through the complex social world and moral ambiguity of this convoluted story. Maggie Verver’s upcoming marriage to Prince Amerigo seems perfect. Just before Maggie and he are to wed, Amerigo’s good friend and former lover, Charlotte, comes back into his life for a brief shopping trip for a wedding present. Even though Charlotte and Maggie have been friends since childhood, Maggie, strangely, has no idea of Charlotte’s intimate connection to Amerigo and happily sets her up with Mr Verver, Maggie’s father. Stevenson gracefully guides the listener through the various emotional outbursts, possibly infidelity, and subtle miscommunications. Stevenson carefully balances James’s comedic and sometimes tragic timing in a performance that feels effortless to the listener.