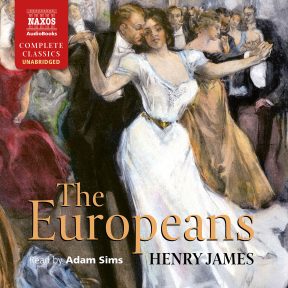 After the collapse of her marriage to an illustrious German prince, Baroness Eugenia Münster arrives in America with her brother, in search of wealthy New England relatives. The duo have an immediate impact on their American cousins, the Wentworths. The Baroness captures the eye of young Clifford Wentworth, and his girlfriend’s older brother Robert; meanwhile, Felix falls for his American cousin Gertrude. The Wentworths are overawed by their European cousins and their frivolous lifestyle. What unfolds is a delightful comedy of manners that contrasts the apparently sophisticated and light-hearted Europeans with the serious and puritanical Americans. At times reminiscent of Jane Austen, The Europeans contains beautiful and vivid descriptions of mid-19th century upper-class New England life.

Narrator Adam Sims expertly guides the listener through the complex relationships Henry James sets up when European cousins Eugenia and Felix come to America to meet their relations. Sims’s soft cadence couples well with James’s prose, and his vocal characterisations distinguish the characters clearly. He captures the European brother and sister especially well. Felix’s delightful French accent and enthusiastic tone emphasise his apparent lightheartedness – he always sounds as if he is smiling. Eugenia’s slight accent and offhand way of speaking make her sound not only false but also somewhat sinister. Sims creates a contrast between the Europeans and the earnest American characters. He navigates prose and dialogue with apparent ease, and his narration makes for a well-paced experience of the novel.