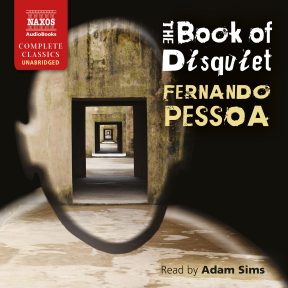 The Book of Disquiet

Assembled from notes and jottings left unpublished at the time of the author’s death, The Book of Disquiet is a collection of aphoristic prose-poetry musings on dreams, solitude, time and memory. Credited to Pessoa’s alter ego, Bernardo Soares, who chronicles his contemplations in this so-called ‘factless’ autobiography, the work is a journey of one man’s soul and, by extension, of all human souls that allow their minds and hearts to roam far and free. Though his outward life as an assistant bookkeeper in downtown Lisbon is a humdrum affair, Soares lives a rich and varied existence within the contours of his own mind, where he can be and do anything. Soares has no ambition, nor has he any friends; he is plagued with disquiet, and only imagination and dreams can conquer it. Compiled by the translator Richard Zenith, Fernando Pessoa’s The Book of Disquiet is a fulgent tribute to the imagination of man.

Titles by Fernando Pessoa
The Book of Disquiet (unabridged)

Many of the greatest Portuguese writers of the last century are Fernando Pessoa, who wrote under dozens of names. This audiobook is presented as having been written by Pessoa’s fictional friend, Bernardo Soares. Adam Sims narrates the 481 sections – some as short as a single sentence – with a detached air appropriate to someone to whom identity is no longer an interesting question. The narration is not flat, just somewhat cool, befitting the emotional level of the text. There’s more than a hint of Marcus Aurelius in this series of meditations on life, human experience, and how to endure them both. This is an audiobook that might be best heard bit by bit, rather than in one extended session.

Having plumbed the depths with its fine unabridged recordings of Samuel Beckett and Marcel Proust, Naxos brings still more existential dimension to the world of audiobooks with this debut of Portuguese author Pessoa’s enigmatic, incomparable masterpiece, ably narrated by Sims. Assembled from trunks of papers – ‘a definitive collection of dregs’ – after the author’s death in 1935, Pessoa’s magnum opus drifts freely between reveries, renunciations, meditations and maxims, often saturated with an air of disillusionment, alienation, and malaise. And yet this ‘saddest book in Portugal’ is oddly comforting, peering into the darkest recesses of life with an indefatigable appreciation for the absurd and reverence for mystery. Though not lacking in irony or effect, Sims’s reading maintains a confiding, conversational humility that allows Pessoa’s own searching intellect and paradoxical moods to hold sway. Rather than listening cover to cover, Pessoa himself might have suggested sampling the book on shuffle play, or while falling asleep as an introduction to dreaming. Sims’s candid rendition of Richard Zenith’s 2001 translation will admirably suit the purpose.

Had Pessoa prepared his Livro do Desassossego (The Book of Disquiet) for publication, it would have been a smaller book. He planned to make a ‘rigorous’ selection from among all the texts he had written, to adapt the older ones to the ‘true psychology’ of Bernardo Soares, and to undertake ‘an overall revision of the style’. This operation would have resulted in a smooth, polished book with perhaps half as many pages, and perhaps half as much genius. Purged of whatever was fragmentary and incomplete, the book would have gained novelistic virtues such as plot and dramatic tension, but it would have run the risk of becoming just another book, instead of what it remains: a monument as wondrous as it is impossible. Pessoa published twelve excerpts from The Book of Disquiet in literary magazines and left, in the famous trunk that contained his extravagant written life, about 450 additional texts marked L. do D. and/or included in a large envelope labelled Livro do Desassossego. Most of this material was incorporated in the first edition of the work, published only in 1982, forty-seven years after Pessoa’s death. It was a heroic effort, since Pessoa’s archives are notoriously labyrinthine and his handwriting often virtually illegible, and it was doomed – for these very reasons – to be seriously flawed. A new edition, published in 1990–91 (the first volume of which was republished, with extensive revisions, in 1997), presented improved readings and over one hundred previously unpublished texts, most of which were not explicitly identified with The Book of Disquiet, although the majority of them could have been penned or typed with Bernardo Soares in mind.

My own edition of the Livro do Desassossego (Lisbon: Assı´rio & Alvim, 1998) – which is the source text for this translation – makes further improvements in the readings, filling in most of the remaining lacunas and correcting several hundred errors in previous transcriptions. I was more cautious about embracing material not specifically marked or set aside by Pessoa for inclusion. The borders of this work are fuzzy, but they exist. They exclude, for instance, the reams of political theory written by Pessoa. Nor is there a place for his writings in pure philosophy and literary criticism. But there are a number of stray and unidentified texts – my edition includes about fifty – that do seem to belong here. Seem to me, that is. It is impossible to avoid subjectivity when editing and publishing such a fragmentary œuvre as Pessoa’s.

This subjectivity tends to sheer arbitrariness when it comes to organizing this book, whose passages were scattered across the years and pages of Pessoa’s adult life. Chronological order? About a hundred passages written between 1929 and 1934 are dated, but only five during the first sixteen years of Disquiet’s existence. To attempt a chronology for the undated texts on the basis of stylistic or thematic affinities is treacherous or even foolhardy, as we can understand by looking at several dated texts, such as Text 386, which was written on 28 November 1932 but is a kind of sequel to ‘In the Forest of Estrangement’, published by Pessoa in 1913. Text 429, conversely, is dated 18 September 1917 but reads exactly like Soares from the 1930s. An exhaustive analysis of paper and ink types and of Pessoa’s handwriting would probably yield a reasonably chronological order, but would that be a good way to publish the material? Pessoa had a few ideas on how to organize The Book, but chronological order wasn’t one he ever mentioned. It is true that many passages from the final phase were dated, but even then not the majority, and Pessoa never suggested that these be published as a group apart, separately from the older material.

What Pessoa did suggest shows only what a loss he was at to organize his Book. ‘Alternate passages like this with the long ones?’ he asked himself at the top of a passage (Text 201) that isn’t particularly short. Another passage (Text 124) carries the heading (written in English) Chapter on Indifference or something like that, suggesting a thematic organization. In some notes on how to organize the material, Pessoa mulled over whether it was better to publish ‘Funeral March for Ludwig II’ in a separate book, with other ‘Large Texts’ that had titles, or to leave it ‘as it is’.

And how was it? Mixed up with hundreds of other texts, large and small, like pieces of a jigsaw puzzle without a discernible picture or pattern. Perhaps this would be the best way to go: an edition of loose pieces, orderable according to each reader’s fancy, or according to how they happen to fall.

Since a loose-leaf edition is impractical, and since every established order is the wrong order, the mere circumstance of publication entails a kind of original sin. Every editor of this Book, automatically guilty, should (and I hereby do) (1) apologize for tampering with the original non-order, (2) emphasize that the order presented can claim no special validity, and (3) recommend that readers invent their own order or, better yet, read [listen to] the work’s many parts in absolutely random order.

In this edition, the dated passages from the last phase (1929–34) serve as a skeleton – an infallibly Soaresian skeleton – for articulating the body of the text. The hope is that the older passages, interspersed among the later ones, will be at least superficially coloured by the ‘true psychology’ of Bernardo Soares. I saw no reason to disrupt the chronological order of the passages forming the skeleton, as this makes for a certain objectivity in this otherwise subjective arrangement. Some of the passages falling between the dated ones are contemporaneous, but others go back to the 1910s. The post-Symbolist texts (mostly from the teens) are the evidence – the visible, dreamed dreams – that the dreamer talks about in his ‘confessions’, and so it makes sense for the two kinds of texts to rub shoulders. They complement each other.

But the ‘Large Texts’, as Pessoa denominated the early prose pieces that weren’t always that long but were large in their ambitions and sometimes had ‘grandiose titles’, have been placed in a separate section, called ‘A Disquiet Anthology’. Pessoa himself recognized that they did not easily fit into Soares’s ‘Factless Autobiography’ (one of various self-descriptive epithets found in the assistant bookkeeper’s scattered journal of thoughts), which is why he considered taking the even more radical step of removing them to a separate book.

For no other reason than to facilitate consultation and referral, I have assigned numbers to the passages in the first section (most of which are untitled), and arranged the texts from the second section by their titles, alphabetically. Pessoa left over six hundred alternate words or phrasings in the margins and between the lines of the manuscripts that constitute The Book of Disquiet. For the purposes of this translation, I have usually preferred the first word or phrasing.

Verbal repetition is part of Pessoa’s style and has been respected, except where the effect seems too mannered for English to bear.

The translated edition of this work that I published in 1991 as The Book of Disquietude (Carcanet Press) informs important aspects of the Portuguese edition I produced in 1998 and of this revised, reorganized and expanded English edition. Some of the discrepancies between this and other English translations (including my first effort) are due to the rather different source text that has emerged as I and other researchers have re-examined the original manuscripts.