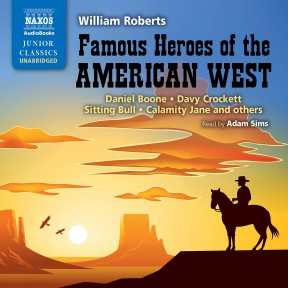 Famous Heroes of the American West

Famous Heroes of the American West is a lively account of the ‘Wild West’ and its renowned figures, narrated with vigour by Adam Sims. The lives of Davy Crockett, Christopher ‘Kit’ Carson, Calamity Jane and Sitting Bull, amongst others, are explored in detail. Their exploits, adventures and alliances make for fascinating listening.

Although this production is intended for a younger audience, adults will also warm to Adam Sims’s tenor voice as he ably narrates the stories of Daniel Boone, Kit Carson, Davy Crockett, Sitting Bull, Chief Joseph, Buffalo Bill Cody, Wild Bill Hickok, Calamity Jane, and Wyatt Earp. Sims gives a seemingly effortless performance as he narrates these accounts with ease and confidence. His voice captures one’s attention and never lets go as he takes listeners on this nearly two-century journey of the westward expansion from the French and Indian War to the death of Earp in 1929. Musical excerpts used to segue between sections add to the listening experience.

From its earliest beginnings, mankind has always felt the urge to push beyond the boundaries of his immediate home environment to explore and exploit the unknown territories around him. Wherever man has lived, the time has eventually come for some – the more intrepid and adventurous, perhaps – to break away from the safety and security of their established colonies and seek out new lands and make new homes for themselves elsewhere.

We know now, for instance, that even before the first white explorers arrived on the shores of the new world of North America (the Vikings, in the first half of the eleventh century), the vast continents of North and South America were already populated by hardy bands of ‘red-skinned’ people who had themselves arrived many centuries before. These people, it is believed, came first by rafts or primitive sailing crafts from the eastern coasts of Asia – Mongolia or northern China – crossing the Bering Sea to touch first on the Aleutian Islands in the far northwest of America (present day Alaska) and working their way slowly along the shoreline southwards and then eastwards, until their nomadic tribes had covered the great continent from shore to shore, and had crossed the narrow isthmus of Central America to explore and inhabit the equally vast lands of the southern American continent. These are the people we now call ‘Native Americans’.

When the Vikings first landed in northeast America, they encountered these fierce and warlike people, whom they called ‘the Skraelings’ (‘wretches’).  They appeared in such numbers, however, and proved to be so aggressive, that the Vikings decided to give up any idea of colonising the new land and opted for settling in Iceland and Greenland instead.

It was more than three hundred years before another attempt was made by Europeans to gain a foothold in the New World, when Christopher Columbus, sailing under the patronage of the Spanish King and Queen, Ferdinand and Isabella, in 1492, commanded three ships that sailed westward until they came upon the islands of the West Indies, in the Gulf of Mexico. By now gunpowder had been developed for cannons and arquebuses, and metal armour for the Spanish soldiers, and this time the attacks made by the ‘native’ peoples to drive off the invaders were easily repulsed. Given that overwhelming advantage, the local tribes were soon enslaved and pacified by the Spaniards, and their lands and labour exploited by the newcomers, who sent the fruits of their enslavement – precious metals, fine hardwoods and exotic plants and food – back to Spain as tributes to King Ferdinand and Queen Isabella.

On his second voyage from Spain to the New World, Columbus landed on mainland America, thus establishing a foothold on the continent itself. Barely a hundred years later the first British ships arrived under the command of John Cabot, and later, of Sir Walter Raleigh, both of whom had come to found British colonies.  From that time forward a steady stream of ships and men from many different nations sailed to the New World to create settlements, and the gradual ‘civilisation’ of America began. No thought was given, of course, to the fact that, strictly speaking, America had already been ‘civilised’ by the numerous tribes that had lived there for many thousands of years – thereby setting a precedent for Europeans to justify the invasion and suppression of indigenous peoples in other newly discovered lands around the globe.

By the time of the American War of Independence against England in 1775, there were more than two million European colonists residing in the 13 British colonies on the eastern seaboard (mostly English, Irish, Scottish and Welsh, with a small number of Dutch and Germans), with many more Spanish, Russian, and French settlers and explorers established on the Pacific coast and the Gulf of Mexico, and around the St Lawrence River and the Great Lakes in the north.  The stage was set, then, for a head-on collision between the interests of the indigenous peoples and those of the newcomers, resulting in a bloody struggle which was to continue for more than 200 years, and which left scars that even today affect the relations between the descendants of the ‘Native Americans’ and those of the white-skinned invaders who conquered them and destroyed their world.

In the original colonial settlements, the structure of law and order was inherited from the British, French and Spanish systems, but as westward expansion took place and new towns and villages grew up along the way, the rule of law was initially compromised by the lack of official legal authorities, often resulting in wild and unruly behaviour, and justice dealt through the barrel of a gun.

In the midst of this maelstrom of movement and conflict, certain strong personalities inevitably emerged as leaders and ‘heroes’. These people became the icons for those who served under them and lived beside them, and who benefited from their courageous leadership. As the stories about these exceptional people circulated far and wide, myths and legends about their lives sprang up, with the result that it is now sometimes difficult to know what is true and what is fable. What is certain is that the courage, wisdom and extraordinary achievements of these personalities directly affected the way in which America came together as a nation.  And not only are their exploits revered within the United States; all around the world their names are known and their stories told. For the glorious achievements of all great men and women – the ‘heroes’ that we look up to as models, wherever they come from – transcend all national boundaries and belong instead to the ongoing history of mankind itself.

Here then are a handful of these men and women, whose lives impacted greatly upon their time and their world in nascent North America – just a few of the most ‘Famous Heroes of the American West’.