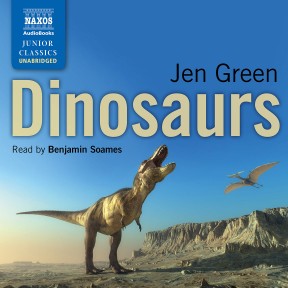 Journey back in time to the age of the dinosaurs, the biggest, scariest creatures the world has ever known. Which dinosaurs hunted in packs like wolves? What was the deadliest dinosaur of them all? Which were the very largest species? Not all dinosaurs were bloodthirsty meat-eaters, but all were armed and dangerous. You are advised to keep well clear as we tour the world of the dinosaurs, taking a detailed look at all the most amazing species.

With at least half the children in the country besotted by all things Jurassic, here is a surefire hit for a car journey to and from a Dorset beach holiday. Green uses metaphors attuned to young listeners to tell the story of the awesome creatures that can be the size of chickens or ‘longer than two tennis courts and weighing more than 1,000 people’, and whose fossilised bones inspired legends of dragons and giants. Among much else that I didn’t know is that the famous fossil-hunter Mary Anning was 12 when she discovered her first Lyme Regis fossil, or that a Victorian banquet was held inside the concrete model of a giant iguanodon that you can still see at Crystal Palace Park, in South London.

Benjamin Soames’s welcoming narration combines the tones of a teacher and a kindly storytelling uncle. The amount of information on dinosaurs is vast, covering their types, history, locations and much more. Short musical interludes conjuring images of the large beasts separate segments, preventing the plethora of information from being overwhelming. Periodically, the audio provides suggestions to help young listeners grasp the concepts being presented – such as describing how they might measure the distance between their own footsteps on a beach to grasp how scientists use fossilised footprints to capture dinosaurs’ speed. This engaging audio may send families searching for the book on which it is based, which includes 3D materials.

Dinosaurs is packed with vivid descriptions of dinosaurs, their habitats, and the periods during which they lived: Triassic, Jurassic, and Cretaceous. Green does an exemplary job explaining the science, comparing the length of dinosaurs to school buses and their weight to elephants. After a brief overview, the chapters are divided by time period and delve into specifics: what dinosaurs ate, if they hunted in packs, and if they roamed in herds. Green points out that early discoveries of dinosaur bones were often misleading until more information came to light. Many fossil hunters are introduced to listeners, including Edward Cope and Othniel Marsh; they revolutionised paleontology, and their relentless rivalry was known as the Bone Wars. Benjamin Soames’s narration is sprightly with a pleasant English accent and clear pronunciation of scientific terms. Much of the etymology for dinosaur names, such as Tyrannosaurus rex, is explained throughout. An excellent resource for anyone interested in dinosaurs, this title is full of encouragement to look for fossils and to keep an open mind.

Millions of years ago, long, long before humans existed, Planet Earth was dominated by reptiles. Flying reptiles called pterosaurs were masters of the air. Resembling giant bats, they swept through the skies on skin-covered wings. Sea-dwelling reptiles shaped like dolphins or long-necked Loch Ness monsters ruled the oceans. The group of reptiles we call the dinosaurs lived on land.

Dinosaurs were impressive and fearsome creatures. They included the very largest and heaviest animals ever to have lived on land – far bigger than modern elephants and rhinos. The very biggest measured as long as two tennis courts laid end to end and weighed more than 1,000 people.

However, not all dinosaurs were large. The smallest were only the size of chickens. This gives you some idea of the variety of the group. Some dinosaurs went on two legs, others four. Some were huge, lumbering beasts built like tanks. Others were slim, graceful and speedy. Many of the dinosaurs that are most famous today were terrifying predators, but most were peaceful plant-eaters.

Dinosaurs vanished from Planet Earth 65 million years ago, wiped out by a mysterious disaster. Soon there was little trace that they had ever existed. Their remains were preserved as fossils, but no one understood what these were. Then, in the 1840s, an English scientist named Richard Owen studied the fossilised remains of three dinosaurs. Owen was an expert in anatomy. He realised that the bones belonged to a distinct group of reptiles that were no longer alive anywhere on Earth. He named the group Dinosauria, which means ‘terrible lizards’.

Dinosaur fossils have now been found on each of Earth’s seven continents, including Antarctica. Of all the continents, North America is probably the richest in dinosaur fossils. Many spectacular discoveries have been made in the foothills of the Rocky Mountains in the west. When a large number of dinosaur skeletons are found together, it is called a dinosaur graveyard. One such graveyard was uncovered in western Canada, at a place which is now Dinosaur Provincial Park. Further south, at Ghost Ranch in southwestern USA, 500 skeletons of a predatory dinosaur called Coelophysis were found piled together.

Not so far away, the rocks of the Morrison Formation in Utah and Colorado were the location of the so-called Bone Wars, a bitter feud between two rival fossil hunters. Between them they identified over 100 dinosaur species. This area is now Dinosaur National Monument. The most famous dinosaur of all time, Tyrannosaurus rex, was first dug up at a place called Hell Creek, Montana. This site dates to 65 million years ago, at the very end of the age of dinosaurs.

The continent of South America holds some of the most ancient dinosaur fossils ever found, and also some of the largest. The bleak, barren Valley of the Moon in Argentina yielded the remains of a small predatory dinosaur named Eoraptor, dating from 228 million years ago. This is the earliest dinosaur ever identified. Not so far away, the remains of an enormous creature named Argentinosaurus came to light. This was probably the very longest and also the heaviest land animal that has ever walked the Earth.

Europe is home to the very first dinosaurs that were ever identified, in the 1820s. These were mostly found by amateur fossil-hunters, who have also unearthed some amazing finds in recent times. In the 1860s, the discovery of the remains of an ancient reptile-like bird, and also a feathered dinosaur, in a limestone quarry in Germany suggested that dinosaurs and birds were closely related. Less than 20 years later, dozens of skeletons of a plant-eating dinosaur named Iguanodon were found in a coal mine in Belgium. This was the first evidence that dinosaurs lived in herds.

Spectacular dinosaur finds in Asia, Earth’s largest continent, have changed the way we think about dinosaurs for ever. In the 1920s an American expedition discovered the first known dinosaur eggs and nests in the barren Gobi Desert in Mongolia. Much more recently, in the 1990s, finds of amazing feathered dinosaurs in China confirmed the theory that birds are descended from a group of small, predatory dinosaurs.

The great continent of Africa has produced some incredible fossils. In the early 1900s, a hill called Tendaguru in Tanzania, East Africa was the site of the world’s largest-ever dinosaur dig, involving 900 people. The expedition uncovered the remains of a long-necked giant called Brachiosaurus, the tallest species found to date. Around the same time, a German fossil-hunter unearthed a priceless treasure trove of dinosaur fossils at an oasis in the Sahara Desert in Egypt. The finds were shipped to a museum in Germany, but sadly they were destroyed by a World War II bombing raid. More specimens have recently come to light at the same location.

Deserts and dry scrublands cover much of the continent of Australia. Few fossils had been found in this hostile land until relatively recently, but now the Fossil Triangle in the northeast, and Dinosaur Cove on the southeast coast are major dinosaur-hunting areas. The first dinosaur fossil was found in New Zealand in 1979, and on the vast, icy continent of Antarctica in 1986. In 1991 the remains of a unique crested dinosaur were found high on a mountain in Antarctica. The continent must hold many more fossils, but unfortunately, most are buried beneath a thick sheet of ice.

A surprising number of the very best dinosaur finds came to light by accident, discovered by people such as miners, farmers, road-builders and jewel-hunters. Some of these discoveries were made in out-of-the way places such as deserts and mountains, but fossils also regularly turn up in fields, woodlands, by rivers or at the seaside. For this reason it’s always good to keep an eye out for fossils whenever you are outdoors in the countryside or on the coast!