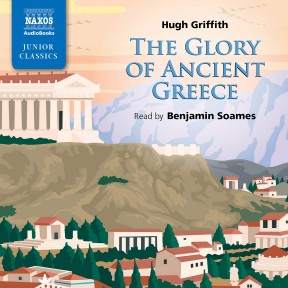 The Glory of Ancient Greece

The glory of Ancient Greece is all around us, even in the 21st century, because Greece was the cradle of Western civilisation. We know about the gods and their characters – Zeus, Athene, Apollo, Ares, Aphrodite – and their heroes, both legendary (Heracles) and historical (Alexander the Great). Architecture, mathematics, politics, philosophy, observation of nature and the cosmos and much more emerged in Ancient Greece. Hugh Griffith’s entertaining but informative account of the people and the history places it all in perspective. An outstanding introduction for younger listeners.

In The Glory of Ancient Greece young listeners will learn about the twelve most important gods and how they were created as well as their all too human qualities. Zeus for example was not an admirable fellow, being highly promiscuous. We learn about the Trojan War in the Iliad and the adventures of Odysseus. Greece before 500 BCE was a collection of small city states ruled by kings and later by aristocrats. In 776 BCE the first games were held at Olympia. Thales predicted an eclipse in 585 BCE and Pythagoras gave the world a mathematical formula. Sparta and Athens were often at odds and Greeks consulted the Oracle at Delphi. The Persians invaded and famous battles were fought at Marathon and Thermopylae. Greek warfare is described in some detail as is the birth of democracy. The Greek empire flourished under Pericles and Greek theater is celebrated, especially the works of Aeschylus, Sophocles and Euripides. Both the Peloponnesian War and the plague attack Athens. Archimedes made a great scientific discovery and Socrates asked people to think, leading to his death. The book ends with the rise of Alexander the Great. Brief classical music excerpts separate chapters.

The book is narrated by former Royal Marine Commando Benjamin Soames who trained at the London Academy of Music and Dramatic Arts. He has appeared on TV and the stage and has narrated fifteen audiobooks for Naxos, many of them junior classics set in ancient Greece and Rome. Hugh Griffith has four books available in the Junior Classics catalogue at Naxos Audiobooks. Besides The Glory of Ancient Greece Hugh Griffith has written Ancient Greek Philosophy: An Introduction, Aristotle: An Introduction, and Great Rulers of Ancient Rome and all are available from Naxos Audiobooks. The Glory of Ancient Greece is detailed but not graphic, a suitable introduction for a young audience.

Starting with familiar tales of Prometheus and Odysseus and ending with Alexander the Great, Hugh Griffith gives listeners a quick tour of Ancient Greece. British narrator Benjamin Soames takes the history seriously while making the examples and comparisons in Griffith’s writing fun. Those examples – such as describing a Spartan camp as ’a kind of Scout troop’ – show that this history is aimed at a young audience, but it’s done well enough for a family road trip as well. As an introduction to Greek history, it’s a good one, covering a lot of ground quickly and even taking a moment to consider the historical basis of the myths. What’s more, there’s a reference map in the accompanying booklet.

In our world today, information is so quickly and easily available that we forget how painfully this knowledge was gained in the first place. And when we look back into the distant past, that’s especially true.

Books and websites are packed with information about the ancient Greeks, but they don’t often mention the most important fact, which is that we can recover only the tiniest fraction of their history. Most of it was lost for ever long ago, and what we do know has had to be pieced together from the few scattered remains that survived.

What we know about the Greeks has come to us in two ways. There are actual physical relics of their world, the temples, pots, iron tools and stone sculptures that have come to the surface over centuries. And there are the books they wrote, that whole body of literature that comes down to us from the various Greeks who wanted to give expression to what they knew or believed.

It’s the physical relics that can have the most immediate impact – even just a few columns of a ruined temple among olive trees in the brightness of the Greek sunlight. And some of the old weather-beaten stones carry valuable information too. When they wanted to record things that mattered, like the passing of a new law, the Greeks would carve the words in stone and set them up in a place where all could see them. These stone inscriptions have preserved for us some of the most important things we know about Greek history.

Most of the ancient relics were buried under the earth and forgotten as newer civilisations came and went. So we owe a lot to the archaeologists who have uncovered them with painstaking labour and carefully interpreted what they found.

Some things are almost indestructible and can lie for ever in the ground or on the seabed just waiting to be brought to light. Stone, fired clay and gold are good examples. The layout of a town, with its walls and streets, will remain preserved through time even when the actual buildings have long vanished.

But most things that are used in everyday life decay much more quickly, and this certainly includes anything to do with books and writing. No writing has survived from the time of the ancient Greeks, some 2,500 years ago, apart from what was inscribed in stone. Yet we can still read the books that they wrote. How is this possible?

The answer to that question makes a very interesting story of its own. The Greeks wrote their books on papyrus, a plant that used to grow in great quantities in Egypt by the river Nile. Less commonly, they used parchment, which is the polished skin of a sheep or goat. Some pieces of papyrus have survived in Egypt, where the sand is so dry that no moisture assists the process of decay. But these are mostly from the 2nd or 3rd centuries AD, already a long time after the golden age of Greece.

In Greece itself, not a single trace remains of all the papyrus and parchment that they wrote on. Obviously, then, when we read their books, we are reading copies of copies of copies. That seems simple enough, until we realise that most of ancient Greek literature has been lost for ever. What we possess is only a very small proportion of all that was once readily available.

Under the Roman empire, Greek literature was still the common property of educated people all around the Mediterranean. But when the Roman empire began to collapse in the 5th century AD, most of that knowledge was lost.

The process of education was halted as the great centres of civilisation were invaded and overrun by marauding tribes of Franks, Vandals, Visigoths, Huns and others. The classical past was forgotten and such learning as remained was now centred on the new religion of Christianity.

During these so-called ‘Dark Ages’, roughly the period 500–800 AD, the papyrus rolls and the parchment books of the pre-Christian Greeks were thrown on rubbish heaps or burnt or left to rot in damp cellars. The surprise is not that we possess so little of Greek literature but that any of it survived at all.

The people we have to thank for its survival are the monks of the Byzantine empire. This was the eastern remnant of the old Roman empire, where the official language was not Latin but Greek. Respect for learning was strongest in the monasteries, and the copying of religious texts was an important duty of those monks who had the skill to do it. Luckily for us, they saw it as their duty to copy not just the Bible and other texts bearing the word of the Christian God, but also the great works of earlier times – Homer’s Iliad and Odyssey, the plays of Aeschylus, Sophocles and Euripides, the Histories of Herodotus and many others besides.

There was nothing in these works about the Christian message, but they were judged too important to be forgotten. Sitting at their desks, labouring away by the light of a candle over many years, those scribes of the Byzantine monasteries saved the greatest gems of Greek literature for posterity.

No one outside the monasteries was at all interested in old books written by the ancient Greeks. Even the monks didn’t always understand what they were copying, as we can tell by some of the changes they made to the text when the meaning was unclear. They knew Greek, but the language had changed much over the 1,000 years or more since the books were first written.

For several more centuries these great works lay forgotten, though thankfully preserved, until at last a new appetite was born in the west, a thirst for knowledge of the pagan civilisations of Greece and Rome. Starting in the 14th century, it grew ever stronger through the 15th century, until all Europe was bathed in the light of the classical past. The ancient texts were copied and recopied, pored over and discussed with reverence.

So began the Renaissance, the rebirth of ancient ideas in a new age of learning. But all depended on those dutiful monks, earnestly preserving those books from destruction by the slow movement of their pens when the rest of the world neither knew nor cared that such books still existed.