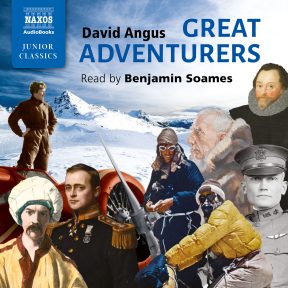 This collection features the lives of nine remarkable people, whose stories have inspired generations of adventurers. With Francis Drake we raid the Spanish Main and sail around the world. With Richard Burton we cross the deserts of Arabia. Hiram Bingham discovers the lost city of the Incas. Amelia Earhart personifies the heroic exploits of the early days of aviation. With Scott and Amundsen we race to the South Pole; with Hillary and Tenzing we conquer the summit of Everest. Thor Heyerdahl, like some latter-day Viking, crosses the oceans of the world in his tiny craft. Although separated by centuries, all are united by their curiosity, courage and the unquenchable spirit of adventure.

Why do we go on adventures? Of course, some people are forced to by unforeseen danger, or circumstances beyond their control. However, some people seem to be naturally adventurous. All the adventurers featured here appear to have been motivated by something in their own character, which prompted them to seek out dangers most of us would probably avoid.

Today some scientists think they can identify exactly what this is. There have been a number of studies of a human gene called DRD4, which triggers the release of a chemical called dopamine in the brain. Dopamine doesn’t exactly give pleasure, but it seems to produce a sense of reward or satisfaction. A variant of this gene known as 7R, carried by roughly a fifth of all human beings, is linked to curiosity and impatience. Dozens of tests have found that if you have 7R, it makes you more likely to take risks or to seek out new places. It has become known as the ‘explorer gene’. Some scientists take this idea even further, and say that it is precisely because we have this genetic variant that we humans have developed as we have, exploring and conquering every corner of the globe.

Of course, that’s not a very romantic way of looking at adventures, and most of our heroes in this book would have found such an idea absolutely ridiculous. Some would rather have believed that they had nobler motives for their actions than merely following a biological need, and maybe they’d be right. Although it’s possible to explain almost anything with science, you can also argue that science is just another way of describing things. The fact that you can describe a passion or enthusiasm as a series of chemical reactions in the brain doesn’t make the passion any less real to the person who feels it. Amelia Earhart, for instance, described her motivation for all the amazing deeds she accomplished as being ‘true to herself’.

It’s interesting that nearly all the adventurers described here wrote extensively about their experiences. This was partly to publicise their achievements of course, particularly if they were explorers who needed to announce their discoveries. It also gave them the chance to talk about themselves and to tell their own stories. Adventures have certainly always made for great stories. In fact, adventures have been the main ingredient of stories since our earliest ancestors sat around a campfire. Today some historians maintain that the whole art of storytelling has its origins in people describing real events, but then making them more exciting by exaggerating what really happened, or adding sensational detail.

Some real adventurers have themselves been guilty of stretching the truth a bit, even though their accomplishments were already quite extraordinary. One of the adventurers featured here, Richard Burton, met another traveller named Wilfred Blunt when wandering around South America in the 1860s. Blunt was fascinated by Burton, who had a tremendous reputation for daring, but he noted later in his diary that Burton ‘never let such a petty matter as the truth get in the way of a good story’. Of course Richard Burton was a natural storyteller; his most popular book was a translation of One Thousand and One Nights, a book of fairy tales in which one astonishing adventure follows another in a narrative designed to delight the imagination.

We all enjoy sharing the thrill of an adventure in our imagination. The really amazing thing is when someone has the courage and resolution to actually set out to achieve what for the rest of us is just a dream, and rightly we celebrate his or her achievements. Maybe it is true that some of us are inclined to be more adventurous than others, whether because of some genetic quirk of fate or some more spiritual explanation. Or perhaps we all have within us the capacity to be adventurers if the circumstances demand it. If Francis Drake had not been forced to flee his home as a child and grown up on a ship, perhaps he might have lived his whole life quite happily as a farmer in his native Devon, and never embarked on dangerous voyages to unknown seas.

Nearly everyone who has ever lived through a dangerous experience has later described it as a defining moment in their lives, something that made them understand their true natures, and often they will later recall these events with pride or satisfaction.

In 1926 the great Norwegian adventurer Fridtjof Nansen was elected rector of St Andrew’s University, in Scotland. The students at St Andrew’s can elect whom they like, and Nansen was a legend in his time. In his youth he was one of many who tried to be the first to reach the North Pole. To do this he deliberately allowed his ship to become frozen into the Arctic sea ice, and then waited for the ocean current to drift him to the Pole. It sounds crazy, but it nearly worked. For three years they drifted across the top of the world, and got quite close to the Pole. Eventually they broke free of the ice and sailed back to Norway.

Although they failed to reach their goal, in another sense, they hadn’t failed at all. They had demonstrated to everyone that the spirit of adventure was alive in the world. Nansen believed that this was a fundamental quality shared by us all. In his speech accepting his appointment as the university’s new rector he said:

We all have a Land of Beyond to seek in our life – what more can we ask? Our part is to find the trail that leads to it. A long trail, a hard trail, maybe; but the call comes to us, and we have to go. Rooted deep in the nature of every one of us is the spirit of adventure, the call of the wild – vibrating under all our actions, making life deeper and higher and nobler.