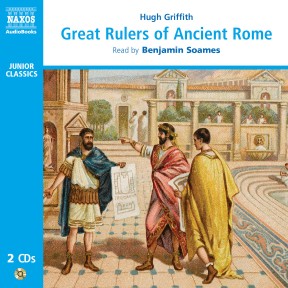 The common view of the Romans is that they were only interested in watching gladiators hack one another to pieces, and in lying on couches while they stuffed large meals down their throats. But of course they were a busy and clever people, who built up a great empire to prove it, with fine cities and harbours, bath houses and roads, laws and good government. In this audiobook you can hear the stories of the great Roman emperors and the enduring legacy that they left for later generations.

The Romans lived so long ago that you might think nothing they did matters any more. But in fact we can’t avoid them – though mostly we don’t realise it. They left their mark so strongly, and in so many places, that we are constantly bumping into things they have left us. Very often these things are so familiar that we hardly think to look at them or wonder where they came from. In the United States the banknotes show an eagle carrying a scroll with the words E PLURIBUS UNUM: ‘one out of many’, meaning one nation made up of many states. And in Britain the coins have letters stamped around the Queen’s head – D G, REG, and F D. D G stands for Deo Gratia, ‘by the grace of God’, REG is short for Regina, meaning ‘Queen’, and F D stands for Fidei Defensor, ‘Defender of the Faith’.

Here are the
stories of
the great
Roman
emperors

These phrases are all Latin, of course, the language spoken by the Romans. You can find on page 9 a list of some other Latin words and phrases that are still commonly used. And this is only a small selection – there are plenty more. Then there’s our own English language, which has a huge number of words with a Latin origin, such as ‘relate’, ‘injure’, ‘solid’, ‘transfer’, ‘capable’, ‘quality’, ‘decimal’, ‘benefit’. We can’t say anything at all without borrowing from the Romans. It’s easy to think we’ve grown far beyond the people of earlier times because of all the things we now have which they never knew – cars, phones, the internet, GPS, power-driven machines that carry out almost every task you can think of. But the more we look at the Romans, or other people who have been before us, the more we tend to find that they did the same sort of things as we do, but using very different methods. And the Romans are of special interest to us because they created the plan on which our world has been based for the last 2,000 years or so.

Here are the stories of the great Roman emperors and the enduring legacy that they left for later generations. As you listen you can discover many curious and interesting things about the Romans and the world in which they lived. But one simple element is worth pointing out at the start, and that is the sea. The Roman empire reached up as far as Britain in the north, but it grew up around a sea, the Mediterranean. The Romans called this Mare Nostrum, which means ‘Our Sea’, and that tells us what a central part it played in their lives. We need to keep the sea at the forefront of our minds whenever we think about the Roman world, because in those times moving things around was far more easily done on water than on land. Moving large quantities of anything by road was almost impossible, because a single cart pulled by a horse (or mule) could carry so little in comparison to a boat. As far as possible, all goods went by sea or up and down the largest rivers. For this reason not just Rome, but all the cities of the past, were built next to the sea or on a great river.

One other important fact about the ancient world is worth keeping in mind: slavery. All societies of that time made their captives into slaves and used them to do the hardest work. It makes no sense to blame the Romans in particular for this, unless we are going to say that all ancient societies were so bad that we want nothing to do with them. Slavery is unjust, as it means that some people own others and treat them as their property. But it was then a universal practice and we have to accept that there were different rules in those days. Slaves were usually those who had been captured in war, and their possible fate ranged from the horrendous to the fairly pleasant, depending on their owner and the tasks they were given. Those who worked in mines had a short and terrible life, and to a lesser degree life was hard for all other sorts of labourers. But a household slave might have very light duties and be treated as part of the family. For many slaves there was also the chance to earn money and buy their freedom. If that was not possible, there was still a good chance that when their master died he would leave instructions in his will to have them set free. So for a slave in those times, unlike the African slaves deported to America and the Caribbean in the 17th and 18th centuries, there was hope that they and their children would come to enjoy the benefits of freedom.