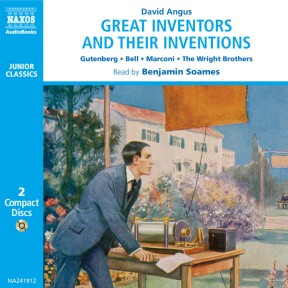 Great Inventors and their Inventions

Nine remarkable men produced inventions that changed the world. The printing press, the telephone, powered flight, recording and others have made the modern world what it is. But who were the men who had these ideas and made reality of them? As David Angus shows, they were very different – quiet, boisterous, confident, withdrawn – but all had a moment of vision allied to single-minded determination to battle through numerous prototypes and produced something that really worked. It is a fascinating account for younger listeners.

This is a marvellous snapshot of nine of the world’s greatest inventors: Archimedes, Gutenberg, Franklin, Nobel, Bell, Marconi, the Wright brothers and Edison. Where would modern mass communication and transport be without such pioneers as Gutenberg, whose engraving tool, cutting into steel, could produce letters no more than a 10th of a millimetre thick, which could actually achieve a higher resolution than letters printed today with a laser printer? That’s the sort of information I, and most kids I’m sure, lap up. David Angus judges perfectly when to switch from the highly technical to the anecdotal. One minute you’re scratching your head at exactly how Archimedes, with a piece of string and two sticks, worked out that the area of a circle is always the same as the area of a triangle when one of the triangle’s sides is equivalent in length to the circle’s radius and another to its circumference. And then, mercifully, we’re transported to 18th-century Pennsylvania, where Benjamin Franklin is flying a kite in a thunderstorm to see if the lightning will travel down the string to the metal key he is holding. He won’t get a shock: he is holding the key with a silk ribbon that he is desperately trying to keep dry. A fascinating and, with luck, inspiring audio.