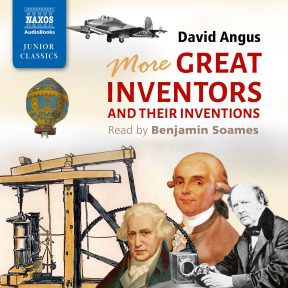 More Great Inventors and Their Inventions

One thing that hasn’t changed much at all in the last 10,000 years is the human brain. The relentless curiosity of the human mind, combined with our ability to solve problems, has resulted in huge innovation and change. Here, then, are some of the most revolutionary ideas of the last 300 years. From James Watt and the invention of the steam engine, and the motorcars of Daimler and Benz, to cinema and television, More Great Inventors and Their Inventions explores the creation of eight great innovations, and the minds behind them.

In the 1960s a group of filmmakers spent over a year with a tribe of the San Bushmen, who live in the Kalahari Desert in southern Africa. They were making a documentary film about the San way of life. One of the filmmakers had heard that the Bushmen had an ingenious method of building bridges, and after a while he asked them to show him how they did this so that he could film it.

Now the Bushmen had never even heard of bridges. In fact the idea of a ‘bridge’ was completely unfamiliar to them. If you think about it, a bridge is only useful if you want to cross over the same way many times. Bushmen wander about the desert looking for wild game and other food. If they come across a gorge or a ravine, they simply walk around it. However, they did not want to disappoint the film crew, who had become their friends. So when it had been explained to them exactly what was wanted, they thought about it for a bit and then they set out to build what the film crew had described to them. The result, which was filmed as the San Bushmen’s ‘traditional’ method of bridge-building, was in fact an astonishing piece of creative thinking, and for the Bushmen it was a completely new invention. Later when the film crew discovered their mistake they were a bit embarrassed, but also delighted to have accidentally filmed a truly great feat of human ingenuity.

One of the reasons that the documentary makers were so interested in the Bushmen is that their way of life – hunting and gathering and living without complicated technology – seems to be very like the way all our distant ancestors lived tens of thousands of years ago. The filmmakers thought that studying the San Bushmen might teach us something about the development of all mankind. What they discovered was that for the San, technology wasn’t something that they didn’t understand or couldn’t master; it’s just that they didn’t think it was any use to them.

Today modern scientists can demonstrate that the one thing that hasn’t changed much at all in the last 10,000 years is the human brain. Apart from a few small groups of people like the San, who are not interested in technology, the relentless curiosity of the human mind, combined with our ability to solve problems, has resulted in a huge amount of change to our environment. In fact, Planet Earth itself is changing before our very eyes, and most scientists agree that this is as a direct result of human invention and technology.

No fewer than four of the inventors who feature in this title were responsible for developing engines, which were significant achievements whilst also the principle cause of modern-day pollution. It is interesting to wonder what James Watt might have done had he known about the consequences of his invention, the steam engine. Within fifty years of his introducing his engine to the world, the buildings in his own beloved city of Glasgow were blackened by the soot from hundreds of factory chimneys. Sometimes it isn’t easy to foresee the side-effects of something new.

Gottlieb Daimler and Karl Benz were certainly ambitious for the success of their motorcars. Surely they could never have imagined that there would be literally millions of them in the world now! This has had consequences in terms of pollution (emissions from cars alone are responsible for more than half of all the pollution in the air today), although happily modern inventors have recently come up with ways to reduce car pollution, such as fitting filters to car exhausts and developing engines that can run on cleaner fuels.

Many people are torn between admiration for new technology and the desire for a simpler life. It’s a tricky problem because the advantages of modern technology are obvious. How many people would be willing to live as the San Bushmen do, without ovens and refrigerators, computers and smartphones, cars and aeroplanes, or the tremendous benefits of modern medicine? The Swedish adventurer Thor Heyerdahl once spent two years living in complete simplicity on the remote island of Fatu Hiva, in the Pacific Ocean. For a while it seemed like paradise, until his wife grew dangerously ill. Fortunately they managed to hail a passing ship, with a doctor on board and the medicine to treat her.

When the San Bushmen of the Kalahari discussed their lives with the filmmakers, they told them that certainly they were aware of modern technology, but they chose to live without it because they believed that their own way of life was preferable. They accepted as part of normal life what we might see as the disadvantages of living without technology.

Change can be confusing, even bewildering, particularly when it happens fast. New technology can also make life seem much more complicated, and today some people yearn for a simpler style of living. Alexander Graham Bell, who invented the telephone, actually refused to have one in his own house because, he said, the ringing interrupted his concentration!

No one can ever predict what an invention will mean for the future. Certainly some of the major problems in our modern world, most notably industrial pollution, have been caused by new technology. However, when Thor Heyerdahl wrote a book about his experiences on the island of Fatu Hiva, he concluded that the benefits of modern technology absolutely outweighed the advantages of living without them. If his wife had not received medical treatment in time she would probably have died.

The greatest hope for all our futures must lie in the extraordinary talent of human beings to solve problems and enhance life through new ideas and inventions.