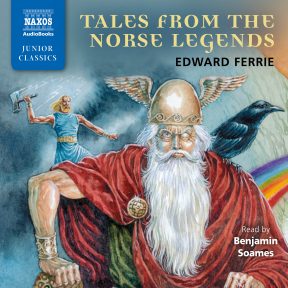 Tales from the Norse Legends

The tales of the Norse gods, of the giants, demons, trolls and dwarves, still have the power to fascinate more than a thousand years after they were first told. Here are the stories of the one-eyed god Odin, the all-seeing, who from his throne in Asgard the home of the gods, has to prepare for Ragnarok, the final conflict between good and evil. There are tales too of Tyr the god of war, of the cunning Loki, of Thor the mighty thunder god and a host of others. These retellings of the old tales are given extra dramatic perspective by the music of Mahler, Grieg, Smetana. They come to life as never before.

These are ten times more imaginative, terrifying and exciting than Greek mythology – though, admittedly, my enthusiasm may stem from the fact that until now I knew practically nothing about the Edda or the Norse gods, except that our days of the week are named after them. To call this a talking book is to describe Lewis Hamilton as a Sunday motorist. It’s a full-scale production, the sort of entertainment you feel you should book seats for. It’s partly the music – Naxos are expert at choosing exactly the right music. The moment you hear those first crashing, thunderous chords of Mahler’s Symphony No. 2 in C minor, followed by Benjamin Soames’s hushed, reverential announcement – ‘The Creation of the Universe’ – you know you’re in for a major 2001: A Space Odyssey kind of experience.

As for the legends, they’re the stuff of nightmare. From the regions of fire and ice, Muspelheim and Niflheim, emerge the gods (good) and the giants (bad), constantly at loggerheads and preparing for the final showdown, Ragnarök. Odin, king of the gods, breathing life into ash and elm driftwood and creating man and woman; Loki, the treacherous god, whose children from his union with an ogress include a wolf and a serpent; Thor, with his great hammer that always comes back to him like a boomerang; the Berserkers, warriors who get so psyched up in battle they can’t distinguish between friend and foe. Compared to this lot, the folk on Mt Olympus are suburban.