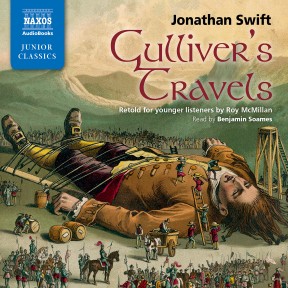 Lemuel Gulliver sets out on a series of travels, but each time he finds himself shipwrecked in new and unfamiliar lands. And how unfamiliar … In Lilliput, everyone is tiny, and it takes thousands of them to capture him; in Brodingnag, they’re huge and treat him as a sort of living toy; in Laputa, they live on a floating island inventing impossibly mad projects; and the Houyhnhnms are horses! But through all his adventures, Gulliver learns to see humans in a different way, too. One of the world’s great works of fiction, Gulliver’s Travels keeps all its humour and satire in this new retelling.

Benjamin Soames presents McMillan’s smooth abridgement of Swift’s classic adventure. Listeners will hear the flavour of Swift’s dry style in McMillan’s writing, and well-chosen vocabulary suitable to Swift’s era adds to its authenticity. Clear sentence structure and a condensed version of Swift’s often lengthy social commentary help the abridgement remain accessible to contemporary listeners. The abridgement uses short episodes to smoothly move Gulliver through his travels. Soames uses a ruminative tone as he discusses Gulliver’s experiences with imaginary cultures like Lilliput. While the story contains sophisticated elements, the fantastical creatures will keep young children interested. As Soames maintains his tempo so that listeners can easily follow Gulliver’s peregrinations, his gentle, analytical voice evokes the spirit of Swift’s original work. This thoughtful narration is a good match for such a cerebral adventure.

Gulliver’s Travels ought to be the most boring book in the world. It’s 300 years old, it’s about incomprehensible politics and religious differences that no one understands now, and it is deliberately trying to be clever. The reason that it’s one of the best books ever (and it is) is because it is a great adventure story, is full of anger at the bad things people do to each other, and is brilliantly funny. Funny sometimes because of its anger: when Swift is most angry, he makes fun of the things that upset him. He makes them ridiculous, and so makes it easy to understand why they are so wrong. This kind of humour is called satire; but it’s not the only kind in the book. It is sometimes funny because it is a bit rude (such as the occasion when Gulliver puts out a fire); and sometimes because it is wonderfully imaginative and absurd (such as the weird inventions people try to make in Laputa).

He had always
suffered from
poor health,
which may have
influenced his
writing and
his general
attitude

This imaginative side of the book is perhaps what has kept it in print ever since it was published. Jonathan Swift wanted to write about the things that he thought were wrong with the politics of his time, but to do so in an interesting way. So he created a series of imaginary places where the hero, Lemuel Gulliver, could travel to. In each of these places, there would be a different style of politics and government, and Lemuel could talk about what style they had in the Europe of the time, and compare this to the style in the place he had landed. This is a good idea, but it has to be said it still sounds a bit dull. But with Jonathan Swift as the author, it is transformed into a science-fiction adventure story.

But there is another thing that makes it so good and so remarkably relevant to us. Many of the things that Swift was describing are still true. Many of his concerns are ones we still have today. Many of the things that outraged him still outrage us. This says a lot about how little human nature has changed (we still have wars, we still treat people badly, we still let tiny disagreements lead to major rows, we still let the rich get away with things the poor are not allowed to get away with); and it also says a lot about how much insight into humans Jonathan Swift had.

He was born in Dublin, and went to university there before getting a job as an assistant to a senior English politician. In this post he began meeting some of the most influential people in politics and literature, and he started writing. He composed poetry, but he had also begun to write satirical pieces about the events of the day, and most people thought he was better at that. However, he was never promoted to a more senior job as he had hoped, and finally agreed to take up a position as a priest back in Ireland. In one sense, this was a deep disappointment to him, but his work was not very demanding and he was able to become involved in some of the bigger issues of the time. In fact, part of his work required him to travel to England to discuss these bigger issues (England controlled Ireland at that time), and he maintained his literary and political friendships, being very highly thought of as a writer and thinker. For a time, he was the editor of a newspaper. But his sometimes radical opinions did not always match those of the people in power. When the queen died in 1714, the new king and his ministers did not like the ideas of Swift and his friends, and Swift realised his time of influence was over. He was offered a job as the Dean of St Patrick’s Church in Dublin, and apart from two visits, he never went back to London again.

However, he carried on writing, and produced some of his very finest works, often in support of the people rather than the government. As a result, he became something of a hero to the Irish. Gulliver’s Travels was a huge success as soon as it came out, and is his best-known work; lots of writers, comedians and satirists still think of Swift and Gulliver as important influences on their work today.

He had several friendships with women, and one in particular (he called her Stella) was his closest friend for many years; but no one is sure whether he married her. He had always suffered from poor health, which may have influenced his writing and his general attitude. It is not easy to be cheerful if you are feeling very unwell, and if you are angry about something in the first place, your mood will be made even harsher. His last years were very unhappy and painful as his illnesses became more pronounced, and he died in 1745 after several years of not being able to write anything.

What he had written, however, was some of the most powerful satire ever created; and the best of it, the one that is still as extraordinary and funny and exciting as it was originally, is Gulliver’s Travels. Not bad for a 300-year-old book about politics.