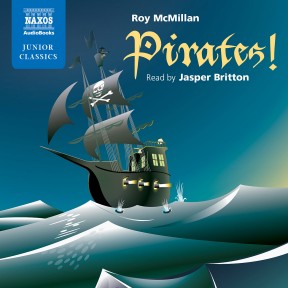 Which pirate incubated chickens in camel-dung? What would Blackbeard do if you didn’t hand over your jewellery (it wasn’t nice)? Which pirate was called ‘The Exterminator’? Where’s the treasure buried? Why were two women dressed as men on the same pirate ship? Who made the Jolly Roger famous? And who was the greatest pirate ever? This 2-CD history answers all these questions and many more; it is the ideal introduction to the facts behind the great legends of piracy. Whatever you think you know about pirates, the truth is even more extraordinary!

McMillan does not overlook present day piracy, and even piracy of the future, in space, no less. Avast, ye mateys! Do not miss Pirates!

Are you or your kids into swashbuckling yarns of yore? Then look no further than Naxos’s Pirates! Told in boisterous, semi-humorous style, this audio book takes you from the outset of piracy in ancient times right up to date with the Somali scourge, regaling you with tales of the dastardly deeds and doings of those who sailed the seas in search of treasure that they could loot and pillage from the merchant navies of the world. Read with great relish and glee by the versatile actor Jasper Britton, who is well-known for his rendering of numerous parts in such great Shakespearean dramas as The Tempest and The Taming of the Shrew, once you’ve started listening to this book, you won’t be able to stop. It’s just as good as, or perhaps even better than (seeing that you can listen to it in the comfort of your own home, without having to get all toffed up for the theatre) a night out on the town.

Due to the vivid and gripping detail that the author, Roy McMillan, provides in his history of piracy, there’s no need for stage props, either! Not only are the pirates and privateers described in all their gruesome and gory detail (though you do receive adequate warning of the gorier bits in the form of ’Gruesome Alert!’), but the reasons for their wielding the power that they had (and, in some instances, continue to have) over the major shipping lanes of the world are explored with much insight, and even with empathy. The etymology of terms to do with piracy is clearly explained, as are their (surprisingly enough!) stringent rules of conduct, with the degrees of allowable mayhem and hard-won mercy being evenly tempered over all.

From the more refined pirates, who even insisted on taking their private libraries on board, to the merciless and vengeful that tended to meet with as savage ends as they meted out to others, a host of piratical characters is shown at their very best and worst. And, even though it was very seldom indeed that women were allowed to join the throngs of the ’brethren’ of the sea, the odd occasions on which they did are shared as well. From the Atlantic seaboard to the South China Seas, McMillan reveals the role played by such seagoing adventurers as Jack ‘Birdy’ Ward, Sir Henry Morgan and Lai Choi San.

Jasper Britton has much in common with the rugged characters of whom he tells, and most likely he would love to give countless pieces of eight to be able to make some of his peers and critics walk the plank! His personal strength and vigor forcefully comes across in his declaration: ’I have very high standards for myself. I try my best to live up to them and I sort of require that other people do their best as well.’ That he shares his ethical stance with those who have been branded as some of the biggest brigands of all times might be surprising, but if you listen to Pirates! you’ll find out how and why this breed of (largely) men came to be. Would you rather opt for a high-flying life than mediocre longevity? If so, join the crew and hop aboard, my hearties, we’re bound for the Spanish Main!

Children from 9 upwards will love Pirates!. Julius Caesar was captured by them, Sir Francis Drake was a relatively nice one, and pirates are still around today. Mostly, they were very, very nasty. The facts here are just as exciting – and gory! – as any fiction.

If you think of the word ‘piracy’, the chances are that one of two things will occur to you. One is a free music or video file available via the Web; the other is someone on a boat with a big beard holding a sword and shouting ‘Aharrrr, me hearties!’ The two are actually linked. There’s still a lot of piracy about, even if less of it these days involves boats. Film piracy, music piracy, software piracy, Internet piracy: if it can be pirated, it will be. Nowadays, pirating generally means to copy something illegally and sell it on (or just pass it on without paying the owner for it), but the link with the bearded, shouting man is in the name. It’s called ‘piracy’ rather than just stealing or theft, and this might be because pirates have always had a particular place in people’s imagination.

They have a reputation as freedom-loving folk who steal from those who, apparently, deserve it – or at least from those who have a lot of money anyway, so won’t miss a bit. Pirates are thought of as dashing and outside the law. When music and film piracy first became a problem, those who were doing it used to claim that they were stopping really rich corporations from getting even richer. As a result, although the corporations want to call it ‘copyright theft’ (which, after all, is what it is), everyone else calls it ‘piracy’ because it seems a bit like the rather romantic idea of old-fashioned pirates. And it’s the old-fashioned (but still thriving) pirates that Pirates! is about.

As it turns out, old-fashioned pirates were rarely romantic; but they still remain hugely popular and appealing characters. For centuries they have featured in fiction (from adventure stories like Treasure Island to pantomimes such as Peter Pan) and they have inspired literally hundreds of films. They are now so much a part of everyday culture that you’ll find pirates at theme parks, water parks, ports, naval exhibitions, lakeside amusements – in fact, pretty much anywhere where there’s a boat, and often where there isn’t. Many people are so familiar with the way in which they think pirates used to talk that you can use a popular Internet search engine in pirate jargon; and there is even an ‘International Talk Like a Pirate Day’ when everyone is supposed to greet their friends with ‘Aharrrr, shipmates!’ (it’s on September 19th).

A lot of this is to do with Treasure Island. The book was a huge success when it was published in 1883, and it introduced to the public many features of pirate lore that we take for granted now: the peg-leg, the eye-patch, the map, the buried treasure, the drinking and general wildness of the pirates, and many of the phrases (such as ‘Shiver my timbers!’). Then the various films of the book promoted the idea of a gnarled, west-of-England accent thanks to the actors Lionel Barrymore and Robert Newton; and thereafter, the public notion of pirate-speak has been getting more and more popular, and more and more fixed.

But as this history of pirates explains, much of this seemingly fictional myth had a good deal of truth behind it, with pirates saying things that sound just like lines from films (‘Damnation seize my soul if I give you quarters, or take any from you!’); and the things that weren’t in the popular myths were often even more extraordinary – try listening to the stories of Anne Bonny and Mary Read or Stede Bonnet, for instance.

The books and films are obviously written and made because people want to hear about pirates, and they’re thrilling, brilliant tales. But the real-life tales of all the pirates were as dramatic, astonishing and comic as anything a writer could think up. And it’s the dramatic, astonishing, comic or eye-popping truth that you’ll hear about in Pirates!.

There are stories about the most famous, most unusual, most unpleasant, most successful pirates that have ever sailed a ship, as well as a couple of pirates who didn’t really make the grade as terrifying adventurers but are worth hearing about anyway. Many of the best-known ones are here of course: Blackbeard, Barbarossa, Captain Kidd, Captain Morgan and so on; but hopefully there will be a few whom you haven’t heard much about, and possibly some who are completely unknown to you – which might just include the most successful pirate ever. To warn you about any approaching horrible bits, you’ll get a ‘Gruesome Alert!’

There is a brief guide to piracy from the very earliest times, as well as information about how it developed in different parts of the world; how it has been suppressed and keeps coming back; how the ‘Golden Age’ in the Caribbean came about; and how it was that very often pirates were actually given permission or even encouraged to attack other ships – they were basically working for their governments! There’s a look at why people became pirates in the first place (would you choose to become a burglar?); what life was like on board (if you were lucky, not too bad, and probably better than being in the Navy); what happened when ships attacked (a lot of noise, smoke, confusion and death, generally); and whether the most famous stories about pirates are true (such as maps, buried treasure and pieces of eight).

There is also a look at the fact that pirates are still operating today and using almost the same methods as they did thousands of years ago. Nowadays you can employ special security services to help protect you and your crew if they are sailing through pirate-infested waters, and it’s probably worth the several thousand pounds a day it will cost: today’s pirates are just as likely to kill or kidnap as any of those in the past. This is not virtual piracy; this is very much the real thing.