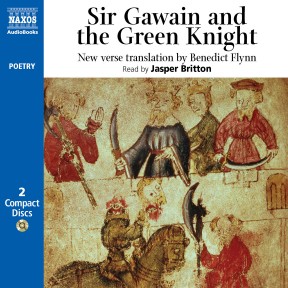 Sir Gawain and the Green Knight

A mysterious knight all in green arrives at King Arthur’s court and issues a bizarre challenge. Gawain answers the knight – but at what cost? This new translation keeps all the poetic power of the original’s extraordinary alliteration. In doing so it brings the saga vividly to life, and in a manner that demands to be heard. One of the greatest stories of English literature from any period, Sir Gawain and the Green Knight is a magical medieval combination of the epic and the uncanny.

We nearly never had the magical medieval tale of Gawain and the Green Knight. Written in around 1401 by an anonymous northerner, the only manuscript to survive got lost for two centuries before resurfacing in 1839. Part ghost story, part thriller, part romance, and part morality tale, it tells of the challenge issued to Gawain at Arthur’s court by a wizard in the guise of a gigantic green-clad knight, of Gawain’s near seduction by his host’s wife just before he meets the Knight, and of how honesty and chivalric courtesy (just) save his head.

New interest in it was aroused by the 1990 opera by Harrison Birtwhistle, but the bewitching music and pyrotechnical staging overwhelmed both poetry and plot. To enjoy it to the full, you need to hear it read aloud.

Until now, there was only Terry Jones’s 1997 reading of J. R. R. Tolkein’s 1975 version, but  two new tellings have just been released: the poet Simon Armitage reading his own version and Jasper ‘Peak Practice” Britton reading Benedict Flynn’s. All three  are unabridged. So which should you go for? Fan as I am of both Tolkein and Jones in other contexts, their version runs a poor third. Tolkein’s love of scholarly correctness gets in the way of the subtle ebb and flow of the original lines, and Jones has much more of a lisp here than in his excellent Fairy Tales.

Choosing between Armitage and Flynn is hard. Armitage is wittily modern and northern; Flynn respects, but is no slave to, the high language of romance. After the terrible Green Knight has picked up his head and gone, Armitage says ‘don’t be surprised if the plot turns pear-shaped’, while Flynn offers ‘no-one should wonder at [the game’s] weighty ending’. Both shrewdly strew it with alliteration, but differently: Flynn sheaves Gawain’s calves in shining grieves, Armitage has leg-guards lagging his flesh.

The narrations also contrast. Armitage’s lackadaisical intoning made me lose concentration on occasion, but there is a poetic magic about it that fits the fitts featly. Britton goes at a much livelier pace with a fine dramatic sense. So I’m going to suggest that you do as I did: get them both, and listen to them alternately, scene by scene. It works like binoculars: you get a deeper understanding of the original, and magnify its intensity.

A ‘horrid horseman’ in ‘vesture vivid green’ bursts into Christmas festivities at King Arthur’s court and challenges a knight to cut off his head. Sir Gawain does so – and a magical morality tale follows. The alliterative form of the 600-year-old original is brilliantly exploited by both translators and both readers are faithful to the text’s Middle English northern dialect. Armitage has the edge for sheer linguistic vigour, but his reading lacks variety of pitch and pace. Britton’s narration is punchier, capturing, for example, the coy, teasing tone of the seductress who tests Gawain’s chivalry, and the tension as he approaches the Green Chapel.

Sir Gawain and the Green Knight are fortunate to be with us. Their survival, like that of Beowulf’s, is a story of luck and literary providence. The sole Beowulf manuscript narrowly escaped destruction by fire in 1731. The only copy of the Gawain poem lay untitled in the same collection, forgotten for over two hundred years before it re-surfaced in 1839. Both are now, one hopes, safe for posterity, in the British Library.

The Gawain poet has been less fortunate than his hero. We know next to nothing of him, not even a name. He was probably a man, given the detailed knowledge of hunting and armour in the poem, and it is likely that he wrote the three other devotional poems bound with the Gawain manuscript. One, known as Pearl, is a mysterious and moving allegory about a father’s grief at the death of his two year old daughter.

Although the Gawain poet was a contemporary of Chaucer, writing in the fourteenth century, Gawain is an altogether different proposition to Chaucer’s work. Chaucer was a master of the form and style of French and Italian poetry in English. Gawain has a wilder, archaic feel, familiar and strange at the same time, but definitely more Norse saga than Canterbury Tale.

The reason is geographical. Chaucer’s culture was centred on London. Gawain was written for an audience in the north of England, an area around Cheshire, Derbyshire and ‘the wilderness of Wirral’. This flourishing northern culture retained more Anglo-Saxon elements, both in ethos and language, than Chaucer’s southern world.

Gawain’s quest does take place in a saga setting. It is a grimly realistic winter landscape that the poet evokes through a dialect with words of Norse origin that were not, or rarely, part of Chaucer’s vocabulary.

But the most important difference between them, and source of the archaic feel of Gawain, comes from the northern poet’s preference for alliteration, a central component of Anglo-Saxon poetry. As Chaucer mockingly makes the Parson in his Canterbury Tale say, ‘I am a Southren man. I can nat geeste ‘rum, ram, ruf,’ by lettre.’ (‘I cannot recite “rum, ram, ruf’ letter by letter’).

We rarely come across alliteration today, but for centuries it was the poetic norm. The rules are complex, but the basic line of Anglo-Saxon poetry has four stresses, three of which begin with the same consonant, with a break after the first two. In the Gawain poet’s expert hands the repeating consonants reinforce the drama, the sense of the words and their emotional content.

He does not avoid rhyme, every stanza finishes with an ancient rhyming device known as the ‘bob and wheel’. The bob is a very short alliterative line of only two syllables. The rhyming wheel which follows is a counterpoint of four lines, used to create suspense or offer an ironic commentary on what has gone before.

To a translator of Gawain, attempting to reproduce the effect of the original in modern English, keeping to the rules of alliteration without inserting anachronisms or making a nonsense of the word order is the central problem. The pitter-patter of consonants may sound strange to our ears, yet without it much of what the Gawain poet intended his audience to hear in listening to his poem is lost. Gawain demands to be heard, and the alliteration gives Gawain its distinctive quality: an Old English form bearing a Romance tale of chivalry and courtly love.

The story begins at Camelot when the Christmas festivities of Arthur’s court are interrupted by the appearance of a green knight. Not merely a knight in green, but entirely of green, riding an equally green horse. The intruder throws down a monstrous challenge: strike him a blow now, in return for his striking a blow a year hence.

Sir Gawain, Arthur’s young nephew, accepts. He takes up the Green Knight’s monstrous axe, and beheads him. To the horror of the court, the body, still living, picks up the head. It instructs Gawain to be at the Green Chapel, to receive a return blow, in twelve months time.

What follows, as Gawain searches for the Green Chapel, is a cracking story in four parts or ‘fitts’ that weave together three different narratives.

The beheading game, the main plot, has its roots in ancient pagan folklore. The earliest version is an eighth century Irish story, Briciu’s Feast, where Gawain’s role is played by the Irish hero Cuchulain.

The narrative tension is increased by two other tests of the hero’s honesty, loyalty and chastity: Gawain’s exchange of winnings with his host Sir Bertilak, and his attempted seduction by Sir Bertilak’s lusty wife.

The theme of temptation by the hostess appears in a number of medieval romances. The closest analogue to Gawain’s experience of staving off the hostess is Yder, an Anglo-Norman romance, where the wife attempts to seduce the guest so that her husband may have power over him.

The exchange of winnings was a real part of Germanic culture, much like an American Indian potlatch ceremony. A man, given a gift, had to return an equal or better one to the giver or risk losing honour. In Gawain the emphasis is on the exchange as a game of truth and keeping true to one’s word.

In the telling of the story the exchange of winnings and the hostess temptation appear to be unconnected with the beheading game. The Gawain poet’s originality lies in the way he combines all three so that the hero’s survival in the beheading game depends on his honesty and chastity in the others. The whole poem becomes a test of truth.

As Gawain faces his trials, the fateful New Year’s Day meeting at the Green Chapel draws closer, and we are aware with Gawain of the near-certainty that he will lose his head. The story’s conclusion, though moral and didactic, is no less thrilling a denouement for that. And, as ever with the stories of Camelot, we find the powerful sorceress Morgan le Faye, Arthur’s half sister, working in the background to destroy the Round Table.

One of the greatest stories of English literature from any period, Sir Gawain and the Green Knight is a magical medieval combination of the epic and the uncanny. As the Gawain poet says, since Brutus first came to Britain from Troy, long before we were born, there have many been tales like this. It is a tribute to his skill that very few have been as well told.