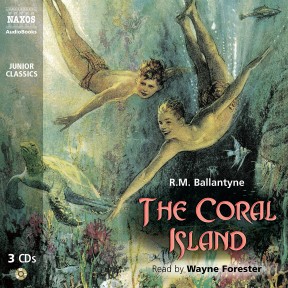 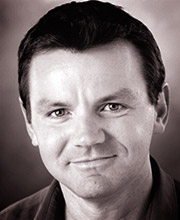 Wayne Forester is a highly sought after voice artist with many character voices to his name. Work includes Zebedee in the New Magic Roundabout and Dad in Horrid Henry. He is also the voice of Rockit the Frog, and Roly Mo, the cuddly storytelling Mole in The Fimbles, and The Roly Mo Show. Wayne has also recorded numerous radio plays for BBC Radio including Dirk Gentley’s Holistic Detective Agency and Under Milk Wood, performing with a digitally re-mastered Richard Burton!

And if Lord of the Flies is one of their A-level texts, they may just be interested to know that this 1857 Boys’ Own adventure story about pirates, cannibals and how to survive on a Pacific island with a broken telescope and a rusty penknife was what inspired William Golding’s novel. He even pinched Ballantyne’s names, Ralph and Jack, for his leading characters – though there the resemblance ends. Here the boys are shining stiff-upper-lip products of empire who risk all to help each other and their friend Peterkin, who may or may not be the piggy in the middle. He sounds as if he went to a better school. This is Peterkin telling his chums what he thinks of being shipwrecked on a desert island: ‘I have made up my mind that it’s capital, first-rate, the best thing that ever happened to us. We’ve got an island all to ourselves. We’ll take possession in the name of the King, then we’ll build a charming villa and plant a lovely garden round it, stuck all full of the most splendiferous tropical flowers, and we’ll farm the land . . . and be merry.’ That’s how small boys wearing round black straw hats, worsted socks and pocket handkerchiefs with 16 portraits of Lord Nelson printed on them and a union flag in the middle used to talk in the mid 19th century.

There is the dream of escape to an uninhabited island, of warm blue seas and white sand, of tranquility. And there is the dream of adventure, of storms survived, of shipwreck and self-sufficiency. Combine with the romantic peril of pirates and you have the perfect mix to fire the imagination of any young mind – and inspire any young boy (at least in the mid-19th century) to search the distant seas.

That certainly was the intention and hope of Robert Michael Ballantyne when he wrote his classic adventure story, The Coral Island, in 1857. He was aiming it at the young boys of the Victorian era: he wanted to tell a yarn that they would love reading, and he wanted them to gain, as he said, ‘valuable information, much pleasure, great profit, and unbounded amusement’ from its pages.

He knew that the balmy Pacific Islands held a special appeal for damp, industrialised Europeans; and he also knew how those two dreams – of escape and adventure – had been part of the fabric of story-telling for centuries. At the same time there was an increasing appetite in Britain for stories of discovery, as the British Empire expanded and trade was established in ever-more distant parts of the globe. New countries, cities and potential markets were being discovered by the traders, and the people back home wanted to know about them. They also wanted to escape the cold, dark, wet and rapidly urbanised world they were living in – even if only in their imaginations.

There was, too, a desire for moral certainty, and Ballantyne’s stories served as comforters. They needed to show that the Western way of doing things (church, marriage, work for its own sake, self-reliance, social structures in general) was the right one. In all regards, Ballantyne fitted the bill. And when it came to adventure, he was a natural.

In fact, he was so much a natural that his first employers called him a ‘useless apprentice’ clerk and claimed he was no more likely to be an accountant than to become Archbishop of Canterbury. This was a little unfair – whatever else he did in his life, Ballantyne was always diligent. He was born in Edinburgh in 1825 and a decline in the family fortunes led to him being apprenticed to the Hudson’s Bay Company in 1841. He spent six years in Canada and, when not disappointing his superiors with his office work, spent time exploring its vast wildernesses as a trader. His time there sowed the seeds of his authorial life, as he used to spend his spare time writing long letters home to his mother. There were only two deliveries of mail a year in some of the places where he was posted, so his letters were very long indeed! But apart from the pleasure they gave his mother, they also served to hone his direct, precise, unadorned style. One winter he was in a particularly isolated location, with little in the way of amusement except for a pen, ink and an inch-thick book of blank paper. He started to write a narrative that would eventually become his first book, Hudson’s Bay, or Life in the Wilds of North America.

When he returned to Edinburgh he was employed by a variety of companies while his first books – all largely autobiographical adventure stories of life in the wild – were published, and in 1855 he became a full-time writer. He married in 1866 and had six children. He wrote more than 90 stories in all, including collections of nursery works, which he published under the pseudonym Comus. The Coral Island was an early but significant departure for him, since it was about an area of which he had little personal knowledge. He armed himself with plenty of reference works, however, and created what was to become his most enduringly popular story. It did teach him a lesson, though. There is a small mistake in The Coral Island, about the skin of coconuts. It was not pointed out to Ballantyne until much later after publication, but from then on he made tremendous efforts to ensure his stories were accurate, spending weeks on a lighthouse, living with tin-miners, and even working with the fire brigade. Through this diligence he earned, and repaid, the trust of his readers – which is another reason his audience loved him so much.

The success of The Coral Island is in part because of the public’s ceaseless appetite for stories of shipwrecks and pirates, but also because it brilliantly exploits a particular brand of plucky resilience that delights in making the very best of a disastrous situation. While contemporary stories of shipwreck (such as the TV series Lost or any number of space-based variants) tend to use the situation for profound introspection or social commentary, any Victorians who found themselves on a deserted Island would be expected at the very least to construct a weather-proof shelter, hunt, fish and cook, make notes on the flora and fauna, create their own clothes, tools and weapons, convert the natives to Christianity, and probably establish a Civil Service.

In short, they would be expected to be actively doing, exploring and collecting, taking the British way of life wherever they happened to find themselves, while maintaining decorum and a thoroughly civilised attitude. This is what the readers of those days believed their country should be doing and it was what Ballantyne believed young men should be aspiring to. His heroes are made in this mould and their attitudes reflect those of the secure, expansionist, mercantile, evangelistic middle-class.

Much of this is uncomfortable for modern readers; but what Ballantyne magnificently succeeds in creating is an absolutely believable, accurately described world in which busy intelligence, courage, skill and curiosity are rewarded. The characters’ resourcefulness is treated equally with delight and admiration, and the pleasure induced in reading about their adventures is infectious. While Ballantyne’s book owes something to Robinson Crusoe, of course, it is perhaps best judged by what it led to. Robert Louis Stevenson was inspired by it to travel to the South Seas. It influenced J. M. Barrie, and William Golding used Ballantyne’s tale as a template for his own reworking of the mythic idea. In other words, without The Coral Island there might have been no Treasure Island, no Peter Pan, no Lord of the Flies (indeed, some scenes of Stevenson’s classic could have been lifted straight from the pages of Ballantyne’s book).

When he died, in Rome in 1894, it was not just the literary world that mourned him. He was buried in Rome’s English cemetery, but back in Britain a subscription was established to establish a memorial for him. Much of the money raised (£600 or so) came in shillings and pennies from the boys he had entertained so richly for some 50 years.