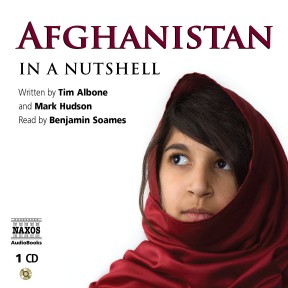 Afghanistan – In a Nutshell

‘In a Nutshell’, the new 1-CD audiobook series from Naxos AudioBooks, continues with a fascinating history of Afghanistan. For centuries it has been the playground of big powers, from Alexander the Great to the British Empire and the Soviet Union. It has been torn by internal strife and ideological differences, yet Afghans, tribal though they may be, remain a proud nation. Here is a short history, setting the background to the current situation.

Titles by Tim Albone
Afghanistan – In a Nutshell (unabridged)

Titles by Mark Hudson
Afghanistan – In a Nutshell (unabridged)

Afghanistan, with its poppies, forbidding geography, earthquakes and internecine clashes, has been invaded since the fourth century. This history ends with the present invasion by Nato forces and explains the tensions between Russia, USA and Britain that led to it.

It took Alexander the Great six months to conquer Persia and three years to subdue Afghanistan, ‘a land of leonine and brave people’, he wrote to his mother, where ‘every foot of ground is like a wall of steel’. Two millennia on, it was Britain’s turn to take on the legendary warrior horsemen. In January 1842, three years after the start of the first Anglo-Afghan war (we’re now on the fourth), the beleaguered British garrison in Kabul, escorting 1,500 civilians, began the desperate retreat to Jalalabad. As they crossed the snows of the Hindu Kush, they were massacred by Pashtun tribesmen, leaving a single British survivor to tell the story. In 1979, 30,000 Soviet troops were dispatched to help Kabul’s new liberal government fight the Islamist mujahideen guerrillas, in whose ranks a youthful Osama bin Laden was already making a name. They retreated 10 years later with a butcher’s bill of 15,000 dead and 65,000 wounded, leaving behind a million dead Afghans. No country as ethnically, politically and religiously fragmented as Afghanistan, with its warlords, honour codes, Taliban fanatics, suicide bombers and a single illegal source of revenue – opium poppies – could expect an easy ride, but since the Soviet occupation it has not had a single year of peace. If only all guides to complex subjects were as clear, compact and impartial.

The first time I arrived in Afghanistan was on 11 September 2003. I flew in on Ariana Airlines and it was a truly terrifying experience. After 30 years of war, the Afghan national carrier leaves a lot to be desired. The plane was old, overloaded and there were no life vests. During check-in the passengers staged a protest. The ground staff were insisting there was too much luggage: the plane was too heavy, there could be problems with take off, they may not have enough fuel to make it all the way to Kabul. Despite the concerns, the passengers won and all the bags made it on. And so we took off from Dubai in an old plane, heavy and overloaded, donated by India. As we spluttered into the sky my fear of dying in a plane crash was replaced by the very real fear that I might actually survive. What then? I was heading to Kabul, the Taliban had only been ousted two years ago, and I’d failed to arrange accommodation or even someone to meet me at the airport. It was the sort of folly that even youth fails to disguise.

Regardless of my fears – and there were many – coming into land I was staggered by what a remarkable setting Kabul presented. It was, for the first-time visitor, truly awesome. Snow-capped mountains ringed the city and I still remember how clear and blue the sky was. As the plane swooped down into the basin I saw adobe huts dotting the mountains. It was a truly marvellous sight, although the beauty was somewhat spoiled by the groaning engines and the number of passengers using their mobile phones as the plane came into land. I couldn’t help remembering all the warnings I’d heard about phones interfering with radar systems.

I arrived in Kabul with nothing but the name of a hotel where I knew journalists stayed. I headed there in a taxi with illusions of making my name as a foreign correspondent. I spent my first night alone in the bar. Later I would discover that all the other residents had headed to the rooftop for drinks, for the very good reason that the night of the anniversary of the devastating terrorist attacks on the USA was not a good time to be sitting in a bar in downtown Kabul – especially as it faced a street and one wall was lined with glass windows.

My university dissertation had been on the Taliban and Afghanistan, and I fancied myself as a bit of an expert, a notion that was short-lived. Undeterred by how little I knew about the country, I boarded a local bus and headed up to the northern city of Mazar-e-Sharif. It should have taken around eight hours, but the Salang tunnel, a marvel of Russian engineering, was closed for repairs and the journey actually lasted more than thirty hours. We spent the night on a mountain pass: the driver had fallen asleep at the wheel and only my screams kept us from veering off the road to almost certain death. And there was, so the rumour went, the likelihood of a bandit attack just ahead.

Afghanistan had
captivated me.
There is a beauty
to the country
that is hard
to describe

It was, despite the danger, a remarkably beautiful journey. The bus drove along narrow dirt tracks, with valleys dropping below on one side, while on the other mountains soared. We stopped along the way in small teahouses that appeared unchanged for centuries. We feasted on kebab – the most delicious, I remember, were minced lamb mixed with tomatoes – all washed down with sweet green tea.

In Mazar I stayed in the most basic of hotels and fell into a sewage ditch while walking at night. Aside from that, it was a pleasant stay. I wandered around the beautiful blue mosque, drank banana milkshakes and found an Indian restaurant. I also persuaded the Turkish consulate to give me a letter with permission to drive through the Salang on the return journey. The engineering works on the tunnel were being carried out by a Turkish firm. I sailed back to Kabul. It was just as well, the thought of another 30-hour journey filled me with dread.

I left Afghanistan a month later, no closer to my dream of becoming a foreign correspondent but in love with the country. I knew I had to return. Fast-forward to August 2005. I lived full-time in the country from then until September 2007 and during my time there I realised my dream of being a reporter. I wrote for The Times and Sunday Times and had more adventures than I care to remember. I was caught in ambushes while with British soldiers, survived a roadside bomb attack while with Canadian troops, and was chased by a mob who wanted to skin me alive. I was also given countless cups of tea, invited into numerous homes, hiked with yaks, and saw some of the most beautiful countryside and mountain ranges of my life. I met some of the warmest people and encountered a level of pride and generosity, despite abject poverty, I had never before experienced. In short, like so many before me, Afghanistan had captivated me. There is a beauty to the country that is hard to describe.

During my time there I watched conditions disintegrate as the Taliban increased their control and gained a foothold in much of the countryside south of Kabul. Drug production soared and the number of casualties among soldiers and civilians soared.

It was a tragedy for which I was largely unprepared. When I first visited Afghanistan, it had so much hope and potential. When I left, I felt the country and its people had been badly let down by the international community. My involvement in Afghanistan has continued. During 2008 and 2009 I followed and filmed the Afghan cricket team as they tried to make it to the World Cup. Out Of The Ashes is the documentary of their remarkable and touching journey. Clearly a national trait!