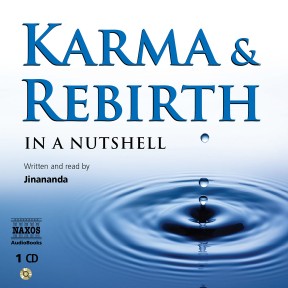 Karma and Rebirth – In a Nutshell

Buddhist teacher and writer Jinananda considers the history, the tradition and the more contemporary view on Karma and Rebirth in this controversial and largely misunderstood topic.

It is with sadness that we acknowledge the death of Jinananda (a.k.a. Duncan Steen). His 2010 recording of Marcus Aurelius’ Meditations topped the Audible.com non-fiction chart in December 2017 – the same month in which he died. Our sympathy goes to his family.

Everything I know about Buddhism – and it’s a fair amount – comes from my Burmese mother, but even she would have been impressed with Jinananda’s intelligent encapsulation of one of the world’s great religions into a mere 78 minutes. No, that’s not his real name. He was born Duncan Steen in Bedford in 1952, joined the Western Buddhist Order when he was 34 and has written scholarly books about karma (i.e. action/energy) and what he prefers to call rebirth rather than reincarnation. The key to enlightenment is selflessness, but what exactly is self? “The self,” says Jinananda, “is like a wave. Each wave has its own characteristic shape but it also changes at every moment, as does the water of which it is composed. It is the same with rebirth – there is no unchanging or separate entity that passes from one life to the next. What does pass to the next life is the wave of karmic propensities or choices made in the previous life.” It is unashamedly brain-taxing at times, but never for too long. Why did my mother never tell me that in the centre of all Buddhist prayer wheels there’s a tiny model of a farmyard in which a cock, a pig and a snake, representing craving, illusion and hatred, are chasing each other in circles? Eat, love and pray by all means, but take time to learn as well.

Compact guides to political, financial and ethical issues are the current fashion in audio publishing, and Naxos’s In a Nutshell series weighs in at the more intellectually taxing end of the market. Close attention to this study of the theory and practice (well, theory mainly, obviously) of rebirth will open your mind to the fundamental mysteries of human existence. Though covering many religions and traditions, its overall viewpoint is Buddhist and the central concept of karma – that “ethical or unethical choices of action have consequences now and in future lives” – might lead to a helpful re-examination of one’s behaviour. No easy answers here, but confirmation that “existence is necessarily impermanent and unsatisfactory”.

Karma and Rebirth in a Nutshell is an accessible starting point. Its lucid and persuasive author and narrator Jinananda began with the Venerable Bede’s likening of a human lifespan to a sparrow flying out of darkness and into a bright feasting hall, then disappearing into the deep forest. Karma led me to The Voice of the Buddha on which Kulananda guides the listener through the Buddhist equivalents of the Christian gospels. To set things in context, I listened to David Timson presenting The Middle Way: The Story of Buddhism, and tomorrow I’m setting off to Cornwall listening to Kulananda’s guide to mental discipline, The Buddha’s Noble Eightfold Path Traffic jams? No problem – they are just temporary hiccups in the eternal flux.

This is a scholarly yet accessible introduction to the spiritual theory often called “reincarnation.” The author, born Duncan Steen in 1952 in Great Britain, became a Buddhist in 1986. He is the author of several books on Buddhism. The introduction makes clear that the topic is not a simple one, with a history of debatable nuances among believers of various, Eastern traditions. Jinananda makes clear he is speaking from the Buddhist tradition, and that the various Buddhist traditions are somewhat splintered on the subject. He begins with research from a University of Virginia professor which details accounts of children and adults across the globe who have seemingly remembered past lives. This includes the phenomena of children exhibiting mastery of foreign languages not logically available to them and knowledge of verifiable facts of history they could not know. He then delves into the subjects of Karma, Tibetan Buddhist cosmology, and other aspects of the subject. His grasp is broad and his enthusiasm for the subject apparent. He reads in a calm, unaffected manner. This is an excellent resource for those interested in the subject.

While the concepts of rebirth and some version of karma are found in many cultures, this short, informative recording focuses primarily on the Buddhist tradition. Jinananda explains how karma works and, more importantly, why misfortunes in this life do not necessarily imply wicked acts in a past life. Particularly fascinating are the remarkable recorded accounts of memories being transferred from dying men to small children half a country away. Jinananda is an excellent reader of his own work. He is clearly invested in the text, and his calm, intelligent tone makes the sometimes-mind-bending theories perfectly clear. This is a well-executed introduction to the Buddhist tradition of karma. At the very least, it will get listeners thinking.

A modern Zen master was asked recently what happens when we die. His reply represents an important strand of thinking on the subject of rebirth. He said, ‘I don’t know. I am not a dead Zen master.’ Everyone is issued a ticket at birth for the journey they must one day take to the populous realm of death. And it is a one-way ticket. As Hamlet observes, no traveller returns from across that frontier, unless in very questionable form, like the ghost of his father. It is a mystery. One cannot be sure of any kind of survival. Nor can one be certain that death is simply a blank nothing.

In the West we have become used to adopting one of two alternative positions: the first is that we die and it’s all over – one performance only, with no curtain calls; the other option is that we go to some other place – heaven, hell, the Elysian fields, limbo or whatever. But there is another, strongly held belief, which is that one can take another turn through this world. One can be reborn. The Dalai Lama, for example, owes his status as the spiritual head of the Tibetan people not by working his way up the ecclesiastical hierarchy, nor because of who his parents were, but by virtue of being the Dalai Lama in his previous life. All other people, according to this view, have antecedent lives of their own, yet for most of us these are completely obscure. There are occasionally individuals who grow up with a clear memory of what they believe to be a previous existence. But for the rest of us, there is no way of knowing who we might have been before this life, nor where we might be born next time around.

The notion of getting another chance at life might seem a comforting one at first glance, but on closer consideration one sees that it overturns some deeply held assumptions about the nature of the individual and his or her relation to others. The idea that we might come back not as ourselves but as someone else is a dizzying one. It is an idea that claws at one’s sense of inviolable individuality. If we can take possession of another life, then it means that we ourselves represent someone else’s unlived life, that we are in some sense acting out someone else’s needs and volitions when all the time we imagined that we were forging our own way through life.

The other implication of rebirth is that one never knows who others have been previously. Buddhists always like to remind themselves that pretty well anyone they meet might have been their mother in a previous life. So rebirth suggests a rethink on how one frames one’s sense of oneself and one’s view of others. A previous generation had to absorb Freud’s discovery that apparently free and independent thoughts, feelings and decisions were the products of unconscious drives, seeded in the earliest years of life. Likewise, in accepting the possibility of rebirth one might have to get used to the idea that those drives come from much, much further back.

These ideas go to the heart of what it means to be human. Is consciousness – our awareness, our feelings, our sense of wonder and aspiration – just a kind of froth bubbling out of a world of dead matter, or does it have a validity and meaning beyond the boundaries of the body and the body’s fragile hold on life?

There is no observable connection, at least for most people, between one life and the next; if rebirth happens, it does so unconsciously. However, the life one finds oneself living now is not regarded, within the many traditions in which rebirth is taken as a fact of life, as in any way a matter of accident or chance. It is supposed to follow on from the previous life as a moral consequence of it. And this is why the idea of rebirth is always associated with the idea of karma. Karma is any morally significant action of body, speech or mind. And the implication of the term is that such actions have unseen consequences for the person performing them.

When someone does something to benefit themselves, which they know will hurt someone else, they may well feel at the very least uneasy, as if mildly poisoned. At some level, perhaps quite unconsciously, self-inflicted damage has been done. If on the other hand they do something kind for someone, the experience is usually pleasurable. They feel more themselves. It is somehow deeply nourishing.

The concept of karma is based on this observable connection between one’s ethics and the experience of oneself that follows from one’s actions. It just takes this connection further. It suggests that one’s ethics affect one’s experience of the world as well, and that this in turn affects how the world responds to oneself – even if one might have to wait until the next life for some aspects of that response. The suggestion is that one can be confident that good deeds will produce positive consequences somewhere down the line, vastly outweighing the more immediate benefits which may accrue from morally unwholesome actions. The past in this way of thinking casts a shadow over the present; and the present shadows the future in the same way. Looked at in this way, it becomes clear why it seems so difficult to stand in the full sunlight of the present moment.

This view should not therefore be confused with ideas of reward and punish-ment that accompany many other religious conceptions of ethics. It is regarded as a natural phenomenon. This tendency to sideline God’s judgement is implicit in most thinking around rebirth and is one reason for the Christian rejection of it. However, in a world culture that is less dominated by Western conditioning, karma – especially in its Buddhist interpretation – is increasingly viewed as a tangible ethical code for many people. As for rebirth, the prospect of coming back to the world might at least encourage some effort in keeping the earth habitable for one’s return.