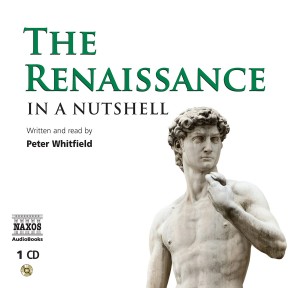 The Renaissance – In a Nutshell

The fifth in the new Naxos Audiobooks series ‘In a Nutshell’, The Renaissance is a short and accessible introduction to the era that gave us Leonardo da Vinci, Michelangelo and Palestrina. The Renaissance swept across Europe between the fourteenth and seventeenth centuries, heralding intellectual revolutions in science, art, philosophy and politics, and marking a decisive shift towards modern thinking. The authoritative Peter Whitfield brings together all the different threads of this transformative period in a lucid and fascinating introduction. 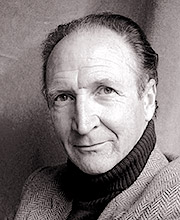 Tactfully but firmly, without making you feel like a complete wally, Whitfield takes everything you ever thought you knew about the incredible flowering of the arts in Europe between, roughly, 1400 and 1550 and gently tweaks it so that you realise you were probably barking up the wrong fresco. For a start, when I glibly referred just now to the “incredible flowering of the arts”, what I should have said was arts and literature, because it was writers such as Boccaccio, Petrarch and Machiavelli who really started the ball rolling. They and their fellow scholars embraced humanism, represented by literature, moral philosophy and history rather than theology and law, putting Man not God at the centre of things. Botticelli, Da Vinci, Michelangelo, Brunelleschi, Copernicus et al feature too, of course, but Whitfield puts it all into welcome perspective.

The nutshell’s kernel is that momentous developments followed from placing man, not God, at the centre of the Renaissance world view. These 78 minutes are packed full of detail, from the artists’ exploration of space and perspective to maps reflecting the changing image of the world. Inspiring.

The information comes so fast that this audiobook may require a second listen. The author looks at the Italian Renaissance (1400–1550), mainly via the rebirth that occurred in painting. He discusses the refinements the artists of the period made in perspective, color, and realism, showing the explosion of talent not realized since. He considers the growth of sculpture and music at the same time and gives appropriate weight to the spread of knowledge by the printing press, invented and popularized around the 1450s. The author/narrator laudably pronounces the Italian and French the names of the dozens of artists mentioned. Whitfield’s native British English is understandable to American listeners, but the examples he cites of artistic techniques remain obtuse without exemplary images.

This is my third ‘nutshell’ and I applaud all efforts to give listeners a pithy update on what educated people should know but may have largely forgotten since college days. One of my favorites in this vein, reviewed some time ago, was The Intellectual Devotional by David S. Kidder and Noah D. Oppenheimer. This ‘nutshell’ is excellent as well. Peter Whitfield gives an excellent overview of one of the most defining movements in Western history. Delving into art, music, religion, science, philosophy, and politics the listener is swept along on a high wave of the human spirit from its inception in Italy as it moved throughout all Europe. No era in human evolution was as hopeful as in this spring of early humanism. With precise and spirited narration, Whitfield captures the unfolding in graceful and informative prose.

Botticelli’s delicate angels; Michelangelo’s towering figures; Leonardo’s scientific notebooks; the city of Florence brilliant with artists and scholars; princes and merchants competing with each other in the refinement of their palaces – these are some of the images conjured up by the word Renaissance. This was a period when the artists of northern Italy created nothing less than a new vision of humanity, full of grace, colour, movement and power, with which they sought to express the contemporary sense of a world made new.

Where did that sense come from? Generations of historians have striven to analyse and explain exactly what happened in Italy in the fifteenth century. Was it truly a period of rebirth, when intellectual freedom was re-awakened after long centuries of medieval darkness? Was it a turning-point in mankind’s understanding of himself and his world? Or is the Renaissance largely a myth – a few painters and writers experimenting with new ideas which had little or no impact on real life? These are the questions that this brief history sets out to explore.

We tend to forget that the Renaissance was not just an era of art. It began with the literary movement known as Humanism in which writers and scholars, beginning with Petrarch, took human experience and human values as their subject and their ideal. Intellect, nobility, magnanimity, refinement – these were the qualities which, they believed, should enrich human life – individually and socially. They could be exercised creatively by the artist, the ruler, the philosopher and the scholar. This view of mankind is very different from the traditional religious perception of humanity as sinful, helpless and wretched. ‘Renaissance Man’ was conscious of his potential power and believed himself to be in control of his own destiny. This explains why historians have spoken repeatedly of the Renaissance as the moment of ‘the rediscovery of the individual’.

As an intellectual movement, Humanism was secular in its inspiration and intention, where formerly all intellectual life in Europe had been dominated by the Church and by religious thinkers. Humanism was man-centred rather than God-centred. Contemporaries were well aware of this, and spoke of themselves as living in an age of rebirth, by which they meant the rebirth of classical ideals, to be found in the literature of Greece and Rome. The term ‘Middle Ages’ was coined to describe the long period during which classical thought had been eclipsed, and human life overshadowed by religious, other-worldly concerns. Petrarch and Boccaccio were the founders of Renaissance literature because they took real human life, both emotional and social, as their subject. This secularity appealed to the social elite, the rulers and princes, who saw themselves as exemplifying the Renaissance ideals of magnificence, creativity and power.

One of the principal ways in which they expressed that power was by commissioning artists and architects to fashion a new environment in which to live, and it was in art that the spirit of the Renaissance was most clearly seen. Artists were inspired to develop a new image of man, one that reflected the humanist ideals of nobility, grace, dignity and power. They took their models from classical art, whose remains were to be found throughout Italy. The flat, linear, devotional art of the Middle Ages was rejected, replaced by the concept of art as a mirror of the real world. Space was ordered according to rules of perspective and proportion, while the world of nature was presented with freshness, accurate observation, and a new sense of the beauty of the physical world. Music too became emotionally richer through the development of complex polyphony, although Palestrina, Victoria and Tallis sustained music’s links with Catholic ritual longer than the link between the Church and the visual arts.

Outside the artistic world, momentous events were taking place which were re-shaping man’s understanding of himself and his world. The Age of Discovery revealed literally a New World, undreamed of by ancient and medieval civilisations, while the great voyages of discovery seemed to exemplify all the boldness and creativity idealised by the humanist philosophy. On the technical front, the invention of printing clearly opened a new era in the dissemination of literature and ideas, making new currents of thought accessible as never before. Even the Reformation, which might appear to signal a return to the medieval domination of religious concerns, can also be seen as marking the new freedom of the individual, for the whole thrust of the reformers’ claims was that the individual has access to God through his own conscience and spirituality, outside the sacramental barriers erected by the Church. Even though the Reformation plunged Europe into decades of savage religious warfare, it too must be seen as breaking apart the rigid orthodoxy of medieval Christendom. The rise of secular science was another act in this revolutionary drama, for the Copernican theory displaced man and his world from the centre of the universe, overturning the world-picture that had prevailed for centuries.

It is for these reasons that the Renaissance is more than simply a movement in the history of art. We are justified in seeing it as a turning point in man’s self-understanding, a critical age in which the European mind moved into new territory with a vision which, arguably, found its true fulfilment in the later Age of Enlightenment.

This disc discusses the intellectual origins of the age of the Renaissance, its social and political dimension, the works of its great artists, and the complex problem of the relationship between art and the wider history of civilisation. It explains briefly and forcefully what we mean by ‘Renaissance Man’, and why that term stands in many ways at the threshold of the modern world.