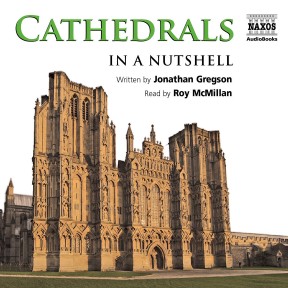 Cathedrals – In a Nutshell

For almost two millennia, cathedrals have been among the most imposing, astonishing and inspiring buildings in Europe. Regardless of faith, their scale and architectural daring has never ceased to spark wonder. This guide traces the development of the cathedral from its earliest beginnings as a Bishop’s house, through the Romanesque and Gothic periods and up to the most extravagant contemporary designs around the world. In doing so, it sheds light on social, religious and architectural history, as well as bringing the story of these extraordinary buildings to life.

Original audiobook productions are increasing in number and variety. Jonathan Gregson, who was accidentally dropped into the font at his christening in St Paul’s Cathedral, Calcutta, developed a critical eye for architecture that serves him well in Cathedrals – In a Nutshell. Although Gregson begins with an appreciation of the great European cathedrals, he ranges onwards and outwards to ebulliently Baroque cathedrals in South America, ’corrugated-iron Gothic’ in colonial Africa and such triumphs of modern engineering as the Metropolitan Cathedral of Christ the King in Liverpool from 1967, the concrete triumphalism of the Metropolitan Cathedral in Brasília and the $300 million Basilica of Our Lady of Peace in Ivory Coast, the world’s largest church, built in 1990. Roy McMillan narrates with his customary intelligent energy.

In the process of researching this audio-book, I asked various priests whom I know which was their favourite cathedral; they invariably thought about it for a good time before offering extremely helpful suggestions as to what they found most beautiful or spiritually uplifting about this or that cathedral. But in the end they all came up with the same answer: the cathedral in which they had been ordained by their bishop. For one it was Lincoln cathedral, for another Winchester. But what determined each one’s choice of ‘favourite cathedral’ was that it was the sacred place that held deep personal significance for them.

On those grounds (although my own training was historical rather than theological), my choice should fall upon the cathedral in which I was christened. For I had the good fortune to be dropped accidentally into the font of St Paul’s cathedral. Not the Wren masterpiece in London, but St Paul’s, Calcutta: a fine example of red-brick Gothic revival that stands on the fringe of the Maidan, the great open space at the heart of what was, at the time I was christened in the 1950s, the world’s most populous city.

If you want to
feel something
of the atmosphere
of a medieval
pilgrimage cathedral,
then join the throng
of people at Santiago
de Compostela

This St Paul’s boasts finely executed stained glass windows of the pre-Raphaelite school, and its aisles are lined with memorials to The Fallen who had been sent off to long-forgotten frontier wars in Burma or Bhutan. On purely aesthetic grounds, I would not place it even within the ‘top hundred’ of the world’s cathedrals. And yet whenever I return to Calcutta, I make sure to spend some quiet, contemplative minutes within its cool interior.

Most often in life the subjective viewpoint prevails, and I believe it has always been so. Early Christians and medieval pilgrims may have marvelled at the splendour of the great pilgrimage churches they visited; but it was the cathedral of their own diocese, its patron saint and whatever holy relics it contained, which meant most to them in the end. And if they were to choose differently, and opt for one of the splendid cathedrals such as Chartres that had risen along the pilgrimage routes, their reasons for doing so would probably have been very different from ours today.

For me, the wonder of Chartres begins when it is still miles away, at the moment I first spy its two unequal spires standing out above the open farmlands of northern France. Approaching more closely, there are the stern, elongated statues of kings and queens guarding the Royal Portal, the later and more delicate carvings that adorn the entrances north and south, and upon entering the cathedral church, the soaring pillars and vaults that seem magnified by the glorious play of light from an array of stained glass windows – those high up in the clerestory as well as the three great rose windows. But, while I find all of this spiritually uplifting, it is the beauty and harmony of the place that really moves me.

Not so, in all likelihood, for the majority of medieval pilgrims who, having set out from the Tour St Jacques in Paris, made an early stop at Chartres on their long way to Santiago de Compostela. For, while I am sure the beauty of Chartres cathedral did much to enhance their religious experience, they would have been equally uplifted by knowing they were entering into the presence of such holy relics as the special Statue of the Virgin and the Shroud that she wore at the Annunciation. And if they were disappointed in their expectation of a miraculous cure at Chartres, they could look forward to visiting the Abbey of the Holy Trinity a little further along their route at Vendôme, among whose religious treasures was a phial containing the Tears of Christ which were, it was universally believed, especially efficacious for those suffering from blindness or poor eyesight.

Among my personal cathedral favourites is the cathedral at Ely, because its fortress-like Norman towers can be seen from afar across the Cambridgeshire fen – just as Chartres can be seen across the fields of Northern France. And also because at Ely on a summer’s evening I once heard two great cathedral choirs joined by those of King’s and St John’s colleges, Cambridge, produce the most beautiful choral music in tribute to a great choirmaster.

Other English cathedrals that I love must include Salisbury and Wells with their spacious and well-preserved closes, Durham for its strength and certainty, St Paul’s in the City of London for its harmony (and because it was the mother church of the cathedral in which I was christened), and Gloucester for its wonderful fan-vaulted cloisters.

In France, the birthplace of both Romanesque and Gothic styles, there are too many to mention them all here, but Amiens is at once the largest and most harmonious of Gothic cathedrals; Reims, the place of royal coronations, has its mysteriously smiling angel; Bourges is a too often forgotten gem; and at Laon I admire the patron and architect for placing pairs of oxen high up on the western towers, in tribute to how these lowly beasts of burden dragged the stone and timber needed to build the cathedral up the steep slopes of ‘La Montagne de Laon’.

If however you want to feel something of the atmosphere of a medieval pilgrimage cathedral, then join the throng of people at Santiago de Compostela, many of whom have walked at least part of the way there and proudly sport the pilgrim’s scallop shell symbol. For the glories of the Baroque – and an insight into how a cathedral can evolve over nearly 2,000 years – St John Lateran, seat of the bishop of Rome, is without equal. And to enter a Spanish colonial time capsule go to the busy cathedral in Antigua Guatemala which, surrounded by abandoned monasteries of the Jesuits, Carthusians and other orders, shows how the spirit endures even after the most devastating of earthquakes.

Finally, in this list of cathedral greats I would mention Cordoba: not because it is an especially fine cathedral, but because, despite its having served as such for the Catholic community for more than 700 years, it remains the most sublime covered mosque in the world and provides a bridge to the architecture of Islam, one of the world’s other great monotheistic religions.