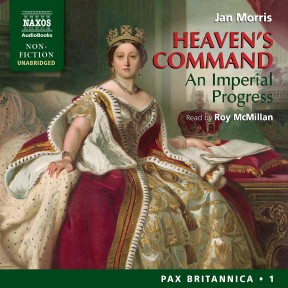 The Pax Britannica trilogy is Jan Morris’s masterly telling of the British Empire from the accession of Queen Victoria to the death of Winston Churchill. It is a towering achievement: informative, accessible, entertaining and written with all her usual bravura. Heaven’s Command, the first volume, takes us from the crowning of Queen Victoria in 1837 to the Diamond Jubilee in 1897, moving effortlessly across the Empire, from the shores of England to Fiji, Zululand, the Canadian prairies and beyond. Truly gripping history.

Published nearly 40 years ago, Jan Morris’s Pax Britannica trilogy has never been equalled. This first volume of her biography of the British empire runs from Victoria’s accession in 1837 to her Diamond Jubilee in 1897 taking in, besides much else, the Great Game, the Irish famine, the Indian Mutiny, the Jamaica Rebellion and the Scramble for Africa. Elegantly written, it is both delightful and consistently erudite, while Roy McMillan’s reading glows with the same infectious passion for the subject as Jan Morris’s own.

Jan Morris’s Heaven’s Command: An Imperial Progress is the first of her imperial trilogy, Pax Britannica. It isn’t the newest history of the British Empire but it is easily the most readable, with a knack of including details that make us reflect on the present. Roy McMillan thoroughly enjoys narrating a story full of happy warriors and generous spirits that people the far-flung places once so flamboyantly pink with memorable characters, but shrewdly avoids rose-tinted spectacles.

It’s the subtitle that will doubtless deter pc history departments from recommending the first of Morris’s splendid Pax Britannica trilogy to students. Imperial is not a popular word these days, though I can still remember the ornate duck-egg blue Imperial Bank of India cheque book my Burmese mother kept in her drawer. She wouldn’t have liked Heaven’s Command because she loved the Raj. Morris doesn’t, but neither does she condemn British colonialism out of hand. This is a cool, dry, carefully considered, often irreverent long view of the 60 years between Queen Victoria’s accession in 1837 and her Diamond Jubilee, the golden age, give or take the odd setback, of empire.

Lord Carnarvon, Disraeli’s colonial secretary, nicknamed Twitters, ’had at first found it difficult to understand what imperialism meant. Later he sorted it out in his mind and cogently explained it to others. There were two kinds of imperialism, he said. There was the false kind, Caesarism, despotism, and there was the British kind – a worldwide trust, keeping the peace, elevating the savage, relieving the hungry and uniting the loyalty of all the British people overseas. Imperialism certainly entailed expansionism, but it was not bullying expansionism. It was merely the extension of British institutions and wholesome influences, if necessary by force.’ Well said, Twitters – got it in one. I especially like the ’merely’. Only an eminent Victorian could call the wholesale transportation to far-flung colonial settlements in Canada, Africa, India and Australasia of old Harrovians, Anglicanism, the British army and afternoon tea as ’mere’.

Now, about those setbacks. Morris’s easy, elegant prose changes gear when disasters loom: disasters such as the British retreat from Kabul after the first Afghan war, described by historian Sir John Kaye as ’the most terrible in the history of British arms and a completion of a tragedy whose awful completeness was unexampled in the history of the world’. Of the 16,500 terrified, starving, freezing souls who straggled out of the Afghan capital on 6 January 1842, only one made it to the safety of Jalalabad 90 miles away. The rest were massacred by tribesmen. There were equally gory engagements during the Indian uprising and the Zulu wars. But there were high points too: the Great Exhibition, Stanley finding Dr Livingstone, thousands of miles of transcontinental railways trumpeting the supremacy of British steel and steam. And best of all are the characters, heroes, villains, eccentrics, epitomised by Lord ’Peccavi’ Napier, victor of Sindh, who made his own spectacles. The British empire definitely had its moments.

Jan Morris acknowledges that this opening volume of her Pax Britannica trilogy, a history of Britain’s empire building from the reign of Queen Victoria to the death of Winston Churchill, is at first too positive in its attitude toward the colonisers. As listeners hear the first section, full of heroic battles read in an excited voice by Roy McMillan, they might agree. However, Morris doesn’t avoid British atrocities like the ’Devil’s Wind’ reprisals for an uprising in India or the murderous violence toward native Tasmanians. McMillan’s reading of this volume captures the energy of battle and the optimism that Britons in the Victorian Age felt toward their expansion and technological feats. McMillan’s reading is well done; however, for additional perspective, listeners may also want to read a history of the Empire in the twentieth century, perhaps Morris’s final volume, Farewell the Trumpets (available Spring 2012).

Roy McMillan narrates this sprawling history of the British Empire during the reign of Queen Victoria (1837–1897). Morris fills this study with small details and sweeping discussions of all the lands of the empire on which the sun never set. With warm, fluid tones, McMillan’s voice takes the listener to small and large cities around the world. The material is organized around a series of vignettes that bring the period to life, and colorful descriptions capture one’s attention. McMillan uses subtle modulations of voice when delivering direct quotations and interrupts his narration to include all the footnotes, which are digressions and authorial comments rather than explanations. Heaven’s Command is the first of the three audiobook volumes in Morris’s Pax Britannica.