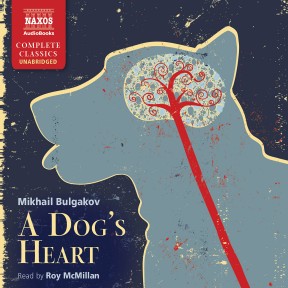 When a respected surgeon decides to transplant human body parts into a stray dog, he creates a monster – drunken, profligate, aggressive and selfish. It seems the worst aspects of the donor have been transplanted as well. As his previously well-regulated home descends into riotous chaos, the doctor realises he will have to try to reverse the operation; but the dog isn’t so keen… Wild, uproarious and deliriously comic, Bulgakov’s short novel is at once a comment on the problems of 1920s Russia and a lasting satire on human nature. 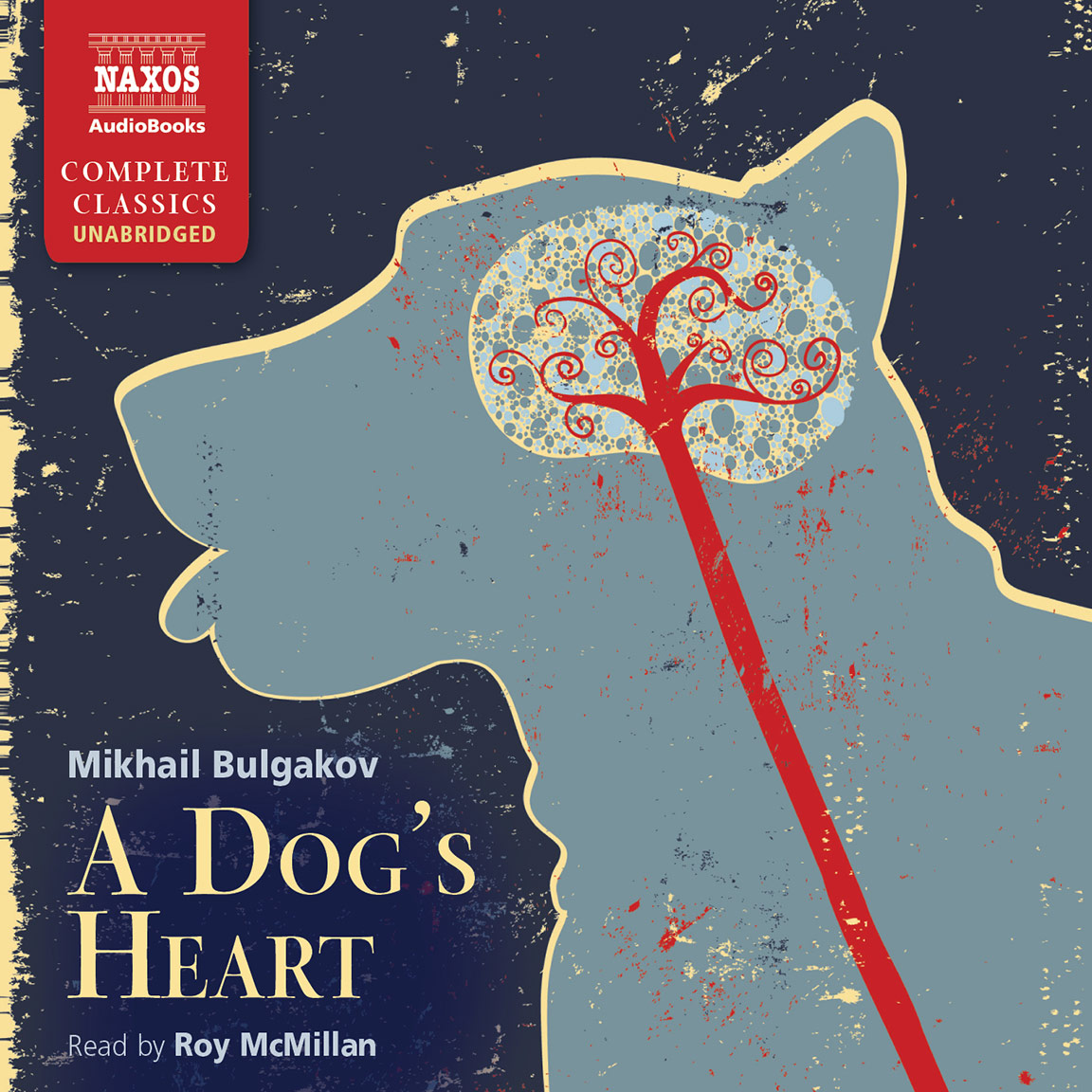 Written in 1925 but not published in Russia for another 62 years, Bulgakov’s tale is a biting satire of the claim that communism will create a Better Man. Surgeon Preobrazhensky implants the pituitary gland and testicles of a drunken Bolshevik into a good-hearted stray dog he calls Sharik. The result, the savage “Sharikov”, is a monstrous travesty of every communist ideal who becomes a rapist and a cat-strangler. The narrator’s creation of the cast of characters, including the dog, is brilliant and brings out the blackness of Bulgakov’s comedy.

A Dog’s Heart, Bulgakov’s 1925 satire on Stalinist Russia’s vision of transforming mankind, is ideal for reading aloud. Roy McMillan throws heart and soul into the opening howls of the tatty mongrel from whose point of view the story is at first told, and then in narrating the rest of the wacky tale of a surgeon’s efforts to make the dog human.

The problem is that he is as louche and outrageous a man as he was a dog. But that doesn’t disqualify him from denouncing the Professor to the secret police. The story ends with as much aplomb as it starts: grins throughout guaranteed.

[…] I greatly enjoyed Roy McMillan’s perfect reading of Mikhail Bulgakov’s novel, A Dog’s Heart. This is perfect satire commenting not just on human nature but on 1920s Russia, when communism produced some strange paradoxes. In this tale we meet a respected surgeon who transplants human glands into a stray dog with dire results. The dog takes on all of the worst traits of the human donor.

Sadly, Bulgakov never lived to see this short novel – or any of his plays – published. Stalin banned all of his work although he spared the writer from the dire fate of some of the other intellectuals of his era. This unabridged audiobook offers many chuckles as well as food for thought.

Magic realism is a phrase associated largely with a late-20th-century style; but in its more general sense it applies beautifully to Mikhail Bulgakov’s work, and to a couple of instances to his life as well. Most of his life was far from magic, and all too realistic. It started well enough. Born in Kiev, his father was a professor at the Theological Academy (he named his eldest son after their home city’s patron saint), and Mikhail went to the local school, enjoyed literature, theatre and the arts and went on to study medicine at Kiev University. The first of his three marriages was to Tatiana, in 1913, with whom he had seen Gounod’s Faust about 10 times. But the First World War interrupted his studies, and he joined the Red Cross before working in a small hospital in Smolensk. He returned to Kiev to start his own practice, and in the process managed to kick a morphine addiction he had started after being either wounded or infected at the Front. But any hopes of a peaceful career as a doctor in his hometown were quickly dismissed. Russia had undergone the Revolution, and despite his best efforts to avoid it, he was caught up in the Civil War that followed.

The various factions fighting for power in the aftermath of the Revolution all needed doctors, and Bulgakov enlisted (though not with any great enthusiasm) for the White Guard and was later recruited (with similar reluctance on his part) by the Red Army. He was posted to the northern Caucasus, where a bout of illness nearly killed him; and decided that the writing he had started to do might be where his true talent lay. And here is the first of his moments of magic. According to his autobiography:

Once in 1919 when I was travelling at night by train I wrote a short story. In the town where the train stopped, I took the story to the publisher of the newspaper, who published the story.

How ridiculously straightforward! If only other writers had thought of doing that. He moved to Moscow in 1921 and began writing in earnest – satirical sketches, short stories, journalism – and started to gain a reputation. After his first marriage ended, he married Lyubov Belozerskaya, and he also published (in serial form) his short novel The White Guard, about a middle-ranking family caught up in the Civil War. But while his satirical views may have been enjoyed, they were also being monitored. Bulgakov had serious reservations about the new Russia and what it was trying to achieve. As a bourgeois intellectual with anti-Soviet leanings he was precisely the kind of subversive that the new, non-elitist, proletarian, atheist Russia wanted to suppress. So when he wrote A Dog’s Heart in 1925, it was perhaps not surprising that his flat was raided and the story confiscated. It was banned no doubt because the authorities thought it in some way mocked the attempt to create the New Soviet Person, the archetypal ideal citizen. They were right.

A Dog’s Heart is a science-fiction fantasy with a touch of H.G. Wells’s realism (Bulgakov was a fan), as well as an astute social commentary and a devilish farce. The science had its root in the monkey-gland transplantation that had taken place in the early 20s. This was seen as a means of improving longevity and virility, and was something of a sensation. At the same time, the Communist Party was trying to inculcate the population with its ideal citizen – someone prepared to submit his individuality to the collective good, while remaining physically strong and committed to the cause. Bulgakov saw the weakness (even evil) of such an ideology; saw that humans were not easily susceptible to such dogmatic shifts, and were rather too fallible for success to be guaranteed. So his fable shows a Russia where the worst of humanity is what gets transplanted, with the worst of the Communist system held up for ridicule. He set this in a very real Moscow, filling it with a wild, gleeful brio that cuts through the darkness at its core.

But finding his prose was being rejected (and abused; one reviewer suggested he be taken outside and bashed with a basin), Bulgakov turned to theatre, and for some years had a relatively successful association with the Moscow Arts Theatre. He had several of his own plays produced, including The Days of the Turbins, a dramatisation of The White Guard, of which Stalin, unaccountably, was said to be a fan. But very few others were. His hectic and vibrant satires were too close to the Soviet bone, and by the end of the 1920s everything he wrote was banned.

It was at this bleakly dark time, unemployed, almost unemployable, that he took a huge risk and was rewarded with the second slice of magic. Many of his family had emigrated at the end of the Civil War, and in 1930 Bulgakov wrote a letter complaining of his treatment and asking for permission to leave the country himself. In reply he received a phone call. From Stalin. Unsurprisingly Bulgakov decided that he did not, in fact, want to leave the country, but maintained that he was not being allowed to work. Stalin arranged for him to return to the theatre and adapt plays by Gogol. Despite this astonishing good fortune, his life was not really eased. His work continued to be banned – even his opera libretti at the Bolshoi and his play about Stalin’s early life (which the subject himself banned because it portrayed him as too gentle) – and his masterpiece The Master and Margarita had to be written in secret. He had divorced again and remarried, this time Yelena Shilovskaya, and continued to write adaptations that were never produced and prose that was never published. But neither was it destroyed. He went blind a year before he died as a result of a hereditary kidney condition.

But his work survived. Bulgakov became a symbol of imaginative humanity against the machine of government. His works were produced in secret, then slowly started appearing in edited forms, before finally – sometimes more than 50 years after they were written – appearing in full. Angry, accurate, vibrantly creative and brilliantly absurd, Bulgakov’s work viewed Russian life from a perspective that is as striking today as it was brave then. He added a firework magic to his creations that has not faded.