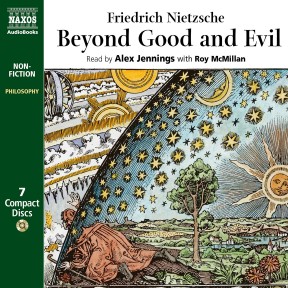 Beyond Good and Evil

Continuing where Thus Spoke Zarathustra left off, Nietzsche’s controversial work Beyond Good and Evil is one of the most influential philosophical texts of the nineteenth century and one of the most controversial works of ideology ever written. Attacking the notion of morality as nothing more than institutionalised weakness, Nietzsche criticises past philosophers for their unquestioning acceptance of moral precepts. Nietzsche tried to formulate what he called ‘the philosophy of the future’. Alex Jennings reads this new translation by Ian Johnston.

Friedrich Nietzsche (1844–1900) occupies a unique place in the history of modern philosophy. His work is obviously a direct challenge to all traditional philosophy, but his style is so unique that there is much dispute about how one should interpret his ideas. For Nietzsche does not offer a systematic approach in the usual way, but launches short vigorous attacks on particular philosophical problems and ad hominem assaults on particular philosophers in an extraordinarily personal and provocative style, which, in addition, often relies upon ambiguous aphorisms and sweeping and speculative historical generalizations and reconstructions. Hence, questions have been raised about whether he should be considered a philosopher at all.

Yet Nietzsche clearly belongs to the rich tradition of German philosophy in the nineteenth century; he is drawing on the work of his predecessors, subjecting it to aggressive criticism, and posing questions which have been at the forefront of much philosophical thinking ever since.

The key figure in that tradition is Immanuel Kant (1724–1804), who had carefully delineated the limits of human reason: our rational understanding of the world involves imposing on it certain inherent ways of thinking and thus we can never have direct knowledge of reality (the thing ‘in itself’) because the human mind subjectively interprets reality rather than apprehending it directly. Kant, however, separated moral and aesthetic knowledge from rational knowledge and held out the tentative hope that, thanks to human creativity and freedom, rational progress and universal principles might be attainable there.

Kant’s followers tended to cast aside the restrictions he had carefully established and to insist that the moral and the aesthetic trump the limits to rational enquiry. George Wilhelm Hegel (1770–1831), for example, developed Kant’s analysis of the creative powers of the human mind to construct a vast all-encompassing view of human history as a continuing story of rational progress in which conflict serves as the spur to a new and better synthesis – to a more progressive stage of history. Arthur Schopenhauer (1788–1860) insisted that desire and will are far more central to human life than reason and that the most important purpose in life is to find some way to enable the will to survive in the face of the irrational and destructive forces which constitute reality.

This view of the dark, mysterious reality of the world Nietzsche takes from Schopenhauer and christens it the Dionysian (he calls himself repeatedly a disciple of Dionysus). The challenge of life, at least for the best spirits, is to recognize the existence of the Dionysian and to find some way of accommodating oneself to the threat of such an overwhelming acknowledgement of the fundamental cruelty and irrationality at the heart of nature. Different cultures do this in different ways, but for Nietzsche, who takes his cue from the ancient Greeks, the highest and best way is through art, through the brave and difficult attempt to create one’s own values and one’s own life in the face of a tragic reality, without seeking repose in the various illusions society has to offer (like science, religion, and traditional philosophy). Only in this way can the highest potential of human life be realized. This is a major theme in his first book, The Birth of Tragedy: ‘the existence of the world is justified only as an aesthetic phenomenon.’

Nietzsche rejects the notion that there is any such thing as a ‘rational truth’ or a ‘universal morality.’ Those who have offered such things have been merely giving us their own interpretations of a world which we cannot immediately apprehend or know through reason. These interpretations arise out of the psychological needs of those proposing them and, as often as not, rest on a faulty understanding of how accidental rules of grammar can petrify errors in thinking. Kant’s morality and Hegel’s views of history are thus deeply rooted, not in the truth of things, but in the particular needs of their two personalities. And they both limit the creativity which the best human beings require in order to realize the full potential of human life. Hegel’s history Nietzsche calls ‘monstrous’ because it belongs to those ways of understanding the world, like mechanical processes, which enervate life rather than invigorating it.

We need to recognize, Nietzsche insists, the fictional nature of all accounts of reality (including science and modern historical scholarship). What matters in such accounts is not whether they are true or not in any traditional sense but the extent to which they serve life, that is, promote the vital creative energies essential to human life. A great deal of what goes on in contemporary intellectual life, Nietzsche points out, limits and demeans life rather than fostering it (particularly academic scholarship), and the same is even more the case with what passes for contemporary culture (in spite of people’s faith in democracy, human rights, and scientific discoveries). As a result, human beings live increasingly boring, mechanical, trivial lives, empty of spiritual significance.

It’s worth noting Nietzsche’s extraordinarily perceptive understanding of human psychology, something he uses repeatedly in his ad hominem attacks on other philosophers and in his analysis of important moral concepts, like ‘guilt’ and ‘sin.’ This quality of his mind also informs many of his historical generalizations about the development of European morality and is one of the most important and interesting aspects of his writing, as Freud acknowledged: ‘[Nietzsche] had more penetrating knowledge of himself than any man who ever lived or was likely to live.’

Nietzsche rests his understanding of human life on the fundamental psychological fact of a ‘will to power,’ a powerful, unconscious instinct to appropriate, conquer, and dominate (unlike Schopenhauer’s view of the will, which stresses its desire to survive). In the best people – the conquering barbarian races – such a will acts simply and directly, without subterfuge. But the will to power, in Nietzsche’s view, can turn against human life and produce all sorts of activities which restrict healthy human living.

Underlying Nietzsche’s critique is a sweeping view of the history of morality (which in no way is to be understood as ‘progressive’ in Hegel’s sense). For Nietzsche, moral categories were first created by a ‘master’ race who defined good and bad in accordance with the awareness of their own admirable qualities. A rival evaluation emerged from the ‘slaves,’ who, as a way of coping with their powerlessness and resentment, proposed their own system of ‘good’ and ‘evil.’ Eventually, the slaves overcame the masters. Thanks to the Jews and their Christian heirs, slave morality was imposed on Europe and has been the dominant moral force for centuries.

This Judaeo-Christian morality turned man’s animal instincts against himself by teaching him the concepts of ‘guilt’ and ‘sin.’ Civilized living took away the natural places where men could discharge their ‘will to power’ spontaneously, and the priestly class, using the ideal of the ascetic religious life, invented and fostered these anti-natural concepts in order to manifest their own will to power against their masters and to give human beings an explanation for their suffering. In the process, they made the human animal interesting, sharpened his intellect, and saved man’s ability to will, but they also made him profoundly ill. According to Nietzsche, now that religion and the truth it preaches have been exposed as a fiction, the time has come for those who are strong enough to become healthy again.

Beyond Good And Evil (1886) is one of the best examples of Nietzsche on the attack, concerned to expose the limitations of earlier philosophers and to insist upon a revaluation of traditional morality. For Nietzsche, earlier philosophers have, among other things, overlooked the most important basic preliminary questions (Why should we prefer ‘good’ to ‘evil’? What is the value of morality?) and have ended up merely serving some conventional morality or other. In addition, they have had an insufficient knowledge of the history of morality and the logical traps contained in grammar (particularly in expressions like ‘I think’ and ‘I will,’ which, Nietzsche points out, are already reductive interpretative assertions which conveniently overlook complex realities).

Rather than subscribing to such reductive ways of seeing the world, Nietzsche insists, we need to realize that all understanding of the world arises from a particular perspective, a horizon of significance, and that anyone who seeks knowledge must learn to develop the ability to view things from multiple perspectives and to develop new perspectives. And he must do this without succumbing to the seductions of nihilism or despair, in a spirit of joyful, even playful, creativity. In Beyond Good and Evil Nietzsche repeatedly calls for philosophers of the future, free spirits, who will be able to face all the difficulties which this challenge imposes and to move into a realm beyond traditional moral concerns, that is, ‘beyond good and evil’.