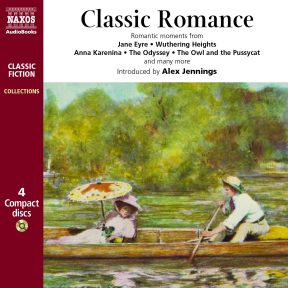 Great romantic moments from literature including Pride and Prejudice, Jane Eyre, Wuthering Heights, Romeo and Juliet, Around the World in Eighty Days

This is a diverting delight, a window on romance in literature. There are high lovers and low lovers, tragic lovers, comic lovers, and lovers who shouldn’t be doing what they are doing at all and certainly not then and there. There is even Fanny Hill trying not to discover what physical love is about when set upon by an old roué who has paid for the privilege. Though of special interest for lovers and their special lover’s day of St Valentine, it is an amusing and sometimes surprising collection.

Mea culpa, mea maxima culpa for not bringing this gem to your attention sooner. A little of the blame must rest with the nice young man who helped me to sort out my audio library last summer and put this between Classic FM’s Top 100 All-Time Favourites and Cradle Songs from the Caucasus. It does have music, but only to introduce some of the most famous declarations of love ever made. They’re all here: Shakespeare’s Henry V wooing Princess Katharine in pigeon franglais; Jane Eyre still managing to sound straitlaced sitting on Mr Rochester’s lap; Molly Bloom’s voluptuous recollections in tranquility of an amorous tryst on Howth Head; the Owl on guitar (small) serenading his beautiful Pussycat. Alas, love being both a many-splendoured thing and merely a madness, not all these legendary lovers live happily ever after. Spare a sobering thought for Adam and Eve (yes, of course they’re here, starting the whole show rolling), Guinevere and Lancelot (that other loitering knight who fell foul of La Belle Dame Sans Merci), Heathcliff and Cathy, Vronsky and Anna, Frankie and Johnny. Why is it that the potency of passion is directly commensurate with the level of restraint employed to describe it? Barbara Cartland’s testosteroned Romeos and swooning, décolletée heroines had nothing on Mr Darcy and Elizabeth Bennet, buttoned up to the neck and probably wearing gloves, exchanging mutual assurances of undying devotion. ‘Elizabeth… immediately, though not very fluently, gave him to understand that her sentiments had undergone so material a change… as to make her receive with gratitude and pleasure his present assurances. The happiness which this reply produced was such as he had probably never felt before, and he expressed himself on the occasion as sensibly and as warmly as a man violently in love can be supposed to do.’ Jane Austen on true love is the lick.