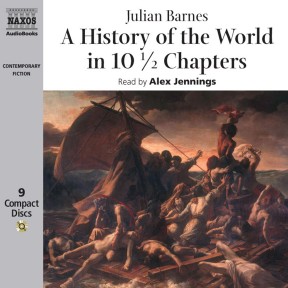 A History of the World in 10½ Chapters

A History of the World in 10½ Chapters tells a series of apparently unconnected stories ranging from a woodworm’s-eye-view of the journey on Noah’s Ark to an astronaut’s quest for its final resting place. There is pastiche and learned disquisition; there is heart-stopping documentary and heart-lifting revelation. But these stories are not separate. They are all linked by a complex weave of inquiry into history itself, into love, myth and fabulation. It’s about everything that matters, told with brilliant imagination, intelligence and humour.

This is a rich Barnesian marinade of musings, analyses and witty, idiosyncratic re-workings of myths and stories. The narrative voice in ‘Stowaway’ is a savvy rodent, who reveals Noah as a drunk preying on his cargo. The account of the terrorist hijacking of a cruise ship told by the guest lecturer in ‘Visitors’ is a tangle of chilling mishandlings and misunderstandings. ‘Shipwreck’ is an account of the sufferings on the raft from the wrecked Medusa, followed by a jaunty analysis of Gericault’s painting. And that’s just three of the ten [and a half] chapters. The narration is polished and vigorous, but unintrusive so that the exuberance of the narratives and ideas take centre stage.

Fact, fiction, myth, opinion – Barnes’s series of disjointed narratives about Noah’s Ark, terrorist hijackers, shipwreck, woodworm, love and more is all of these. It leaves you torn between thinking that its sum is greater than its parts and that, then again, some of the parts are pretty damned good too, especially the half-chapter titled ‘Parenthesis’. Somehow this pithy new Alex Jennings recording perfectly succeeds in combining the various ‘history is bunk’ and ‘love conquers all’ strands.

And when you’re fed up with conventional linear narratives, Barnes’s clever, funny, intriguing and, yes, all right, tricksy 1989 collection of stories both true and fictitious, about ships, shipwrecks and associated maritime incidents, will give you something to ponder. I’ve been mulling fitfully over what it tells us about survival, history, art, love and woodworm ever since I first heard it umpteen years ago on cassette, which is probably why this latest version, read by my all-time favourite audio voice, came up to Scotland with me. I’m still happily pondering.

There is a clue in the title. But it’s only a clue. A History of the World in 10½ Chapters is not a conventional novel, in that there is no single narrative or narrator; nor is there one tale being told from different perspectives. It is not history in the conventional sense, either, which would normally entail making sense of a series of events and giving them a clear, linear meaning or interpretation. Perhaps the biggest clue to the nature of the book revealed in the title is that it is funny and intriguing, knowingly undermining its own grandiloquence. A history of the world in just ten chapters? And what’s this ancillary ‘half’?

The ten chapters (which is itself misleading. One chapter is divided into two distinct sections, while another is divided into three separate stories. A history of the world in 13½ chapters? Twelve chapters and three half chapters?) are relatively straightforward to summarise. The Stowaway tells the story of Noah’s Ark from the viewpoint of an uninvited burrower. The Visitors has a group of terrorists hijack a cruise ship. The Wars of Religion is a legal case fought between the sixteenth century inhabitants of a French town and the woodworm that damaged their Bishop’s seat. The Survivor is the post-apocalyptic diary of a woman escaping the effects of war on a stolen boat in an attempt to start a fresher, purer life. Shipwreck is in two parts – part one deals with the wreck of the French frigate Medusa and the escape on a raft of its passengers and crew; part two with Géricault’s painting of that escape. The Mountain deals with Miss Amanda Fergusson’s attempt to reach the summit of Mount Ararat. Three Simple Stories (there’s a clue there, too – but you will not be surprised to learn the stories are not that simple) tells three tales – one of a man who escaped the sinking of the Titanic; one a literary examination of the story of Jonah and the whale; and the other an account of the St. Louis, which set sail from Germany just before WW II with over 900 Jews on board. Upstream! is a series of letters from an actor to his girlfriend while he is filming an ill-fated historical drama in the jungle. Parenthesis (the half-chapter) is a meditation upon love. Project Ararat tells the story of an astronaut moved to search for the Ark on his return from space. The Dream is a vision of heaven as a suburban or possibly sit-com fantasy.

One or two of the linking themes become clear from this brief exposition – ships and shipwreck, Noah’s Ark, survival. One or two of the others become clear when you first get to know the book – woodworm in particular crop up a lot. But these immediate themes are themselves essentially comments, footnotes, echoes and prefigurings, hooks-and-eyes that serve to link the broader ideas that are living in the book’s intelligent, touching, humane, funny, inquisitive, complex narrative. It is not a conventional novel; but it was conceived as a whole and works as a whole because of the delicately maintained queries about man’s relationships with God, with history, with stories and with fables that occur throughout the book. In many of the chapters, the seemingly disparate tales touch upon the reliability of history itself, how it recurs, what those recurrences might mean, how it is interpreted and remade through art and through memory.

It is knowingly literary in its narrative manner. Several chapters (or parts of chapters) take as their basis genuine historical events and retell them, sometimes in the style of an essay, sometimes as a story. This is done with an eye to making a point about the nature of history and how we can or don’t learn from it, or how fables become fact, or how we are determined to believe there is a pattern to the past. But can we be sure that what purports to be actual history actually is? On the other hand, some of the stories are entirely fictional, but are used to much the same purpose in the book – are these tales less convincing because they are fictional? Especially when the book makes the point that art is about truth, whereas history is about stories. Some chapters are told through fully imagined characters; some with an objective narrator; others are apparently in the voice of the author. But one can never be sure whether the author is actually Julian Barnes or someone he has invented – something he himself (which may mean Julian Barnes or some other personality) alludes to directly in Parenthesis.

This, however, is not just intellectual posturing, or self-conscious literary game-playing, however much the author is aware of what he is doing, and however entertaining that can be. It works on a more profound, less guarded level because Barnes unveils and examines profundities by approaching them from an unexpected angle rather than head on. Even when apparently approaching them head on. Parenthesis appears to be a kind of confessional – touching, heartfelt and personal (we think) – about love; about why it’s crucial; about how it can make you a better human being (though not necessarily in the ways you might imagine). At the same time, the chapter is again filled with those deft allusions to the rest of the book that link it to the main narrative, give it a greater depth and validity than if it were simply a confessional. Love and its relationship to the history of the world itself is the vast subject for this apparently intimate memoir.

There is a genius of implication throughout this book that builds from the first chatty opening lines through the dissertations and legalese, essays, reminiscences and short-story narratives of the others, that catch us wondering how it is we believe what we believe, why we believe it, whether even our own testimony is valid. A History of the World in 10½ Chapters ranges in stories and styles from the elegantly objective to the brilliantly inventive, from deadpan to exuberant, from myth to fiction to history. In doing so, it illuminates humanity with a rare combination of precision and sympathy, literary neatness and a kind of restrained but limitless compassion. It is not a conventional novel.