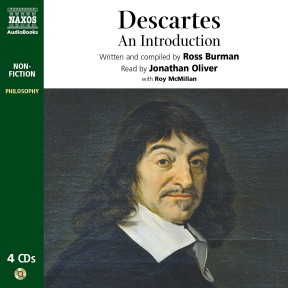 René Descartes is one of the formative figures in Western philosophy, logic and mathematics. His famous statement: ‘I think, therefore I am’, has become perhaps the most famous phrase in all of philosophy. Descartes’s ground-breaking writings attempted to establish unshakeable foundations of knowledge, and set a trend for subsequent Western philosophy, which has endlessly critiqued and expanded upon his ideas.

Cogito ergo sum notwithstanding, what else do you know about the 17th-century Frenchman regarded as the father of modern philosophy? The good thing about Naxos’s series of introductions to philosophers, which includes Plato, Aristotle and Nietzsche, is the way it gently guides you through what could be some pretty daunting theories of belief or, in Descartes’ case, doubt. Every excerpt from the original text is preceded by a brief explanation. Here, for example, is the intro to his Principles of Philosophy published in Latin in 1644: ‘Principles is divided into four parts covering metaphysics, physics, cosmology and geology, each with a number of titled paragraphs. In the preface Descartes describes his view of human knowledge using a tree as a metaphor. The branches are the applied sciences such as medicine, psychology, mechanics and even ethics. The trunk of physics supports these, and all are nourished by metaphysics or philosophy at the root.’ René Descartes (1596-1650) was Renaissance man epitomised – a brilliant polymath interested in so many different disciplines (the cartesian coordinates system is still used in maths) that, to give himself time and space to think, he abandoned Paris and spent nine years travelling, occasionally as a mercenary, throughout Europe. His lifelong habit of rising late began as a child, when he was sent away to a Jesuit school and managed to convince his teachers that his poor health required him to stay in bed for most of the morning. 50 years on he accepted a position at the Swedish court to teach philosophy to Queen Christina whose only free time, it turned out, was at 5am. Unused to chilly dawns, Descartes caught pneumonia and died, aged 53.

René Descartes is usually one of the first philosophers to be read by students of philosophy and is arguably one of the best known, with his pithy ‘Cogito ergo sum’ quotation (‘I think, therefore I am’) even appearing on 21st-century T-shirts and coffee mugs. Written for the everyman, the student, and the philosopher alike, the ideas and concepts in the Discourse on the Method, Meditations and Principles of Philosophy are still part of modern culture. The three Matrix films used the idea of a massive computer controlling every aspect of reality, remarkably similar to Descartes’s evil demon. But whereas the films retain the evil nature of the computer, Descartes makes his demon a benevolent God to aid the (rather weak) rebuilding of trust.

Listeners to these essays may be left a trifle confused, asking themselves, does Descartes actually answer anything? It almost seems that, in dismissing all that cannot be trusted, Descartes writes himself into a corner. He dismisses the teachings of others, the evidence of the senses, and the truths of mathematics until there seems to be nothing left to build reality upon, apart from his ‘Cogito’ catchphrase, and God. It could also be said that one reason for his obsession with the existence of God is that it gives him a hasty scaffold with which to shore up his ruined house.

This is, however, doing Descartes a disservice. In his defence it should be mentioned that it is a common error to hold that ‘all that can brought into doubt’ does not exist or should be disregarded; one should merely be aware of their poor foundations. Also, ‘I think, therefore I am’ (or rather ‘I am a thinking thing’) is a fundamental truth to Descartes’s epistemology, or theory of knowledge. It started a journey of argument that ran from the medieval to the modern. Thinkers such as Locke (1632–1704), Berkeley (1685–1753) and Hume (1711–1776) argued that knowledge came from either external sense data (empiricism) or, as Descartes argued, from the mind (idealism). (That was until Kant (1724–1804) came along and in careful prose steered a winding course between the two.) It was Descartes’s idealism that would force him to his separation of the mind and body, which he could only align through the arbitrary use of the pineal gland.

The Renaissance is seen as this moment of change from the medieval world to the modern, when learning stipulated by religious dogma was rejected. The proliferation of Gutenberg’s printing press with movable type, invented 200 years earlier, allowed books to become more available, taking the control of knowledge and learning away from the Church and diluting its authority over people’s thoughts. This power and control can still be detected throughout Descartes’s almost obsessive revisiting of his ‘proofs of the existence of God’, showing, if not a terror of the power of the Church then a desire to reconcile his thinking with the authority of the time.

Descartes was a renaissance man, a true polymath, a brilliant mathematician whose workings and theories hold more practical use today than his philosophy. He was also a physicist and biologist who had written extensively on the workings of the eye, and, among much else, a soldier and popular (by all accounts) ‘man about town’. No dusty academic then. He had the time and the money to think, write and apply himself at a time of great intellectual change. He sought a return to an era when logic and argument ruled intellectual life, rather than dogma and dictum. He makes it clear throughout his philosophical works that his is a personal journey, one which everyone should make. We should not take his conclusions as fact or ‘the answer’. The Discourse on the Method is just that, a means by which we can all make a journey through our own intellect; the Meditations are an account of his journey, a travelogue of the mind; and the Principles of Philosophy form a corpus of his thoughts, considered and documented.

In the abridged section from the Discourse, presented here, we find his reasons for starting on his journey: having spent a cold, disturbed night in the ‘oven’ of a house in the Bavarian village of Ulm, Descartes wakes with a need to reorder and redefine his understanding. This is an interesting and personal image, explained by the fact that ovens in houses at that time, and from that area in Europe, were large room affairs where the fire of the house was constantly tended. Although not philosophically important, it does, however, throw up a significant point about Descartes: that it is the style and intimacy of his writing that makes him so accessible. He is, like all philosophers, careful in his construction; it is easy for an argument to be lost or dismissed on linguistic or semantic grounds. There is, though, a vibrancy and immediacy to his style that places the reader next to Descartes as he sits in his chair and ponders, say, his piece of wax. It is this immediacy, rather than a lofty, careful, almost pedantic style of writing, that gives Descartes his accessibility today. Only David Hume matches him for sheer brio.

This is one reason why Descartes is still so widely read; but why is he still such a potent force in the philosophy of today? Descartes holds more weight and importance than an entertaining, some might say superficial, style might deserve. We have seen his scepticism destroy his certainty of the world. We have seen his constant ‘proofs of God’ become more placation than restoration. What answers does Descartes have left? The answer is: it’s not important. What is important is the journey – i.e. the means, not the end. Descartes is important not because he found the answers but because he went looking for them. The doubt and scepticism is what we should take from Descartes and apply to our own existence. In this superficial, media- and celebrity-obsessed world of political intrigue, religious uncertainty and alternative medicines, a mote of doubt and investigation would not go amiss. Descartes has shown us that this is not only possible but essential, given that we are able to use our own minds to create our own existence.

But that’s only my opinion. What do you think?