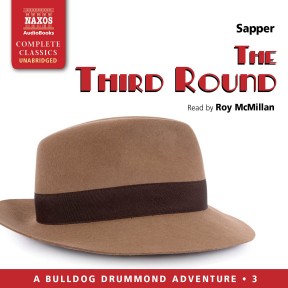 When Professor Goodman discovers a method of creating flawless diamonds at almost no cost, it is much more than a scientific curiosity – especially to the members of the Metropolitan Diamond Syndicate, who determine to stop this threat to their healthy profits. But their plans backfire when the man they recruit to keep the Professor’s discovery a secret turns out to be the world’s greatest villain. Only one man can stop the ensuing intrigue, kidnappings, plotting and murder: Bulldog Drummond. Yet even he is pushed to the limit when he faces his nemesis in the waters off the south coast. Gripping and thrilling, this is the third of Bulldog Drummond’s contests with the master-criminal Carl Peterson. But is it the last?

By the time Sapper – pen name for Herman Cyril McNeile – published the third of his Bulldog Drummond novels in 1924, an action-adventure franchise was already firmly under way. As described in his debut story in 1920, Capt. Hugh ‘Bulldog’ Drummond, D.S.O., M.C., is a World War I vet hungering to enjoy the lusty sporting life of a wealthy English gentleman.

In short order, Drummond and his equally adventuresome band are taking on extraordinary criminals and conspiracies. The character was so popular that the first book was quickly and successfully adapted for the stage while its author became the highest paid short story writer of the 1920s.

Bulldog first came to the silent movie screen in 1923, and various incarnations and series were produced until the late 1960s. Alfred Hitchcock’s 1934 The Man Who Knew Too Much was based on Bulldog Drummond stories. Richard Johnson gave Bulldog a very Bondian take in Deadlier Then the Male (1966) and Some Girls Do (1968). Along the way, Bulldog starred in his own radio show and was the lead avenger in books written by various authors well after Sapper died in 1937.

In the Case of The Third Round (book, 1924; film, 1925), Drummond isn’t the only recurring character. The arch-nemesis of the first four novels is master of disguise Carl Peterson, who repeatedly tries to pull the puppet strings of criminal escapades that typically threaten the fate of England.

Clearly based on literary predecessors such as Moriarty and Fu Manchu, this time Peterson is after a formula created by Professor Goodman that can make flawless diamonds. Members of the Metropolitan Diamond Syndicate, fearful of this threat to their profits, hire Peterson to silence Goodman – only to have their assassin turn out to have plans of his own. And these plans include silencing his old foe, Bulldog Drummond, in a watery grave, after getting in some psychotic revenge.

As with all such romps, the story is a series of contrived and fast-paced twists and turns designed to surprise and tantalise readers. Perhaps the biggest surprise is how little many of these books have become dated. Perhaps that’s because the formula created by the ‘Clubland’ writers like John Buchan, Dornford Yates and Sapper, would shape so much of the James Bond oeuvre to the point that many of the elements of Drummond stories are still essential in contemporary adventure tales, as in the books of Clive Cussler and Jack Higgins. Only the technology and geopolitical backdrops have significantly changed. Well, no gentleman of Drummond’s breeding would engage in extramarital sex.

Few contemporary heroes and their villains can banter with equal repartee. Hence, these books were once ideal for British schoolboys. The most astute of them must have picked up what was more than obvious then and now: no one should take a single page of these tales seriously.

For this new Naxos AudioBooks edition, narrator Roy McMillan continues the leisurely, tongue-in-cheek style he gave to his readings of the first two Sapper books, Bulldog Drummond (1920) and The Black Gang (1922). These are the sort of novels perfect for terminal or on-the-road listening as they’re light fare, simple and fun. Most readers will be amazed that a character and his milieu, now almost a century old, are as entertaining now as they were when Ian Fleming was a teenager.

[…]The action is fast and furious from beginning to end. This unabridged audio production of The Third Round is superbly narrated by Roy McMillan […] making it a highly recommended addition to personal and community library audio book collections!

There seems to be an inexhaustible demand for action heroes. From the earliest fictions to the current films, television series, novels and graphic novels, our appetite for the hero (and it does tend to be hero rather than heroine, Lara Croft notwithstanding) has maintained an astonishing vigour. After the previously unimaginable destruction of the First World War, it would have been understandable if the public had turned away from violence and decided to allow their imaginations to exercise in calmer fields of interest, or at least with heroes who would be less physical in their determination to uphold what is right. This was not the case. In both the United States and Britain, the glut of hard-talking, fast-shooting, morally certain sluggers poured out into the eager hands of a public who – if nothing else – clearly liked to know which side was the good one, and to see it win comprehensively. In inter-War Britain the man who found the perfect action hero for his time was Herman Cyril McNeile, who wrote under the pseudonym ‘Sapper’ and created one of the genre’s most iconic characters: Bulldog Drummond.

McNeile was born in Cornwall to a Naval man (at the time the governor of a Naval prison), and went from school to the military academy in Woolwich, London. From there he joined the Royal Engineers, whose underground tunnellers were known as ‘sappers’ (hence his later nickname). He was with them throughout the War and was awarded the Military Cross in the process; but he seems to have been writing before the outbreak of the War. It is not easy to be certain, since serving officers could not use their real names in articles or stories, which was why he needed a pseudonym in the first place. By the end of the War he was already a successful and popular author and he resigned from the Army to write full-time, publishing the first of the Bulldog Drummond books in 1920. They continued to appear until his death, upon which Gerard Fairlie (McNeile’s friend and one of the inspirations for Bulldog Drummond himself) continued the series into the ’50s. Although many of McNeile’s works were popular, it was his Bulldog Drummond stories that seemed to capture the public imagination most forcibly (and most often – there were scores of radio and film adaptations as well as books).

Its essence is
a pounding good
adventure story;
a thriller where
the plot races
with gusto

Drummond served as a perfect bridge between several worlds. McNeile recognised that the character was a new version of older sleuthing types such as Sherlock Holmes and Raffles, and thus linked pre-War Britain (or more particularly England) with the contemporary realities of the 1920s. What he could not have known was that his character would himself prove a model on which future writers would base their heroes. The creators of The Saint and James Bond readily acknowledged their debt to Sapper, making him a development in the story of detective and adventure stories from the late 19th through to the 21st centuries. The obverse of this popularity was that some writers became so infuriated with the all-pervasive influence of Drummond-like characters that they either spoofed them or went out of their way to ensure that none of their protagonists’ qualities were in any way like them.

This is understandable. The idea of Bulldog Drummond has become so familiar, entrenched almost, that it is difficult sometimes to discern the strength and originality of the character; and the less appealing elements can be magnified beyond their true stature precisely because the caricature is so much more immediate. What was really there was a figure who embodied a particular kind of Englishness. Bulldog Drummond was independently wealthy and thus free of the day-to-day concerns of earning a living. He had ‘done his bit’ in the War – no shirking of national or personal responsibility – and done it with skill and daring. He had no doubt about what was right and should therefore be protected, and he had no qualms about doing so with his fists or a gun. But what he also possessed was a particular kind of ironic solidity: a strength without vanity, realistic yet self-mocking, and allied to a sense of delight and absurdity. Life’s a game, and it had better be a good one; let’s have a martini at the club, old fruit, before we tackle the international master-criminal. McNeile called those who possessed these qualities ‘The Breed’.

All this is admirable, feeds the Englishman’s sense of himself, and adds to the gaiety of nations (as well as making many readers wish they were possessed of similar sang froid). But lurking within this was another set of values which were largely universal in the readership of the time but which frankly rankle now. Drummond is privileged, monied and seemingly unaware of the inequity of this. He has no doubts, and is never presented with anything where the right course to adopt is questionable. He assumes that the values of the Empire are all good, and that pretty much all foreigners are not to be trusted, and can be dismissed with derogatory adjectival promptness. Concerns about these shortcomings are valid, but they are not the core reason for the continuing appeal of the books and should not obscure what that appeal is. They are failings but they also reflect the attitudes of the time; and, most significantly of all, they are no more than minor interjections in the text rather than its essence.

Its essence is a pounding good adventure story; a thriller where the plot races with gusto, where the villain is able to adopt disguises that can fool the closest inspection, where bizarre and terrible characters can plot outlandish heists, where we can trust the hero and wonder how he will escape, enjoying his unruffled wit as he faces what must surely be a gruesome death. There is a rich canon of these adventure stories, one that continues to grow. Bulldog Drummond sits proudly at the head of it, charming, brave and undaunted.