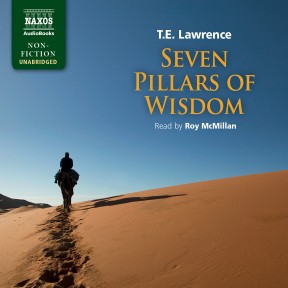 Although T.E. Lawrence, commonly known as ‘Lawrence of Arabia’, died in 1935, the story of his life has captured the imagination of succeeding generations. Seven Pillars of Wisdom is a monumental work in which he chronicles his role in leading the Arab Revolt against the Turks during the First World War. A reluctant leader, and wracked by guilt at the duplicity of the British, Lawrence nevertheless threw himself into his role, suffering the blistering desert conditions and masterminding military campaigns which culminated in the triumphant march of the Arabs into Damascus.

Almost a century after the first Arab spring – the 1916-18 revolt against the Ottoman empire, culminating in the triumphant capture of Damascus – modern Arabia is still a war zone. More than half the articles in my latest Talking Newspapers Digest are about the Middle East – what better reason to listen to a new unabridged version of this monumental account of the author’s leading role in that earlier historic desert campaign, which made him one of the great legendary heroes of all time. The version I reviewed five years ago was so savagely abridged, you only really got the facts, and facts weren’t TE’s strong suit. Seven Pillars has been called a novel travelling under the cover of autobiography. I prefer the 1930s reviewer who said ‘Lawrence has a novelist’s eye for detail, a poet’s command of the language, an adventurer’s heart, a soldier’s great story and his memory and intellect are at least as good as all those’.

‘The heat of Arabia came out like a drawn sword and struck us speechless.’ No one captures the beauty, the cruelty and immensity of the desert and its tribes as brilliantly as Lawrence. Thanks to his extensive prewar travels in Syria and Mesopotamia, he understood their manners, their mentality, their language. He was fluent in Arabic, Greek, Turkish and Syriac as well as French, German and Latin. In native dress he could pass as a Circassian shepherd. His recruitment by British intelligence in Cairo was inevitable, likewise his subsequent mission to unite the numerous warring Arab factions against the Turks and their German allies. In 1916 he had a price of £15,000 (£1m in today’s money) on his head. But when, having led the Arab camel cavalry across the Negev desert to victory at Aqaba, Lawrence – on a recce in Turkish-held Deraa – was randomly taken in for questioning, the Bey accepted his Circassian shepherd cover story. He was flogged and gang-raped before being thrown out – normal practice. Had he been recognised, death would have been a mercy. It’s a long book but there’s no way that the abridged version would have inspired David Lean to such cinematic heights. Lawrence was a complex man – brave, intelligent, passionate, a reluctant hero deeply troubled by his divided British/Arab loyalties. He was truly the last of the gentleman adventurers.

Known to most as Lawrence of Arabia, T.E. Lawrence was a passionate chronicler of Middle East military events during WWI, in which he was embedded. This book is his story. Narrator Roy McMillan conveys Lawrence’s sincerity with a calm yet enthusiastic delivery, depicting a man fascinated with the world around him. Through McMillan’s compassionate reading we can better understand how Lawrence found sympathy for the Arab cause of an Arab state at a time when the region was mostly tribal. Those seeking a wider understanding of the Middle East will be enlightened by Lawrence’s observations of the land and its people during this pivotal development period.

At the funeral of T.E. Lawrence, Churchill wept and called him ‘one of the greatest beings of our time. Whatever our need we shall never see his like again’. For the generation who experienced the mud and horror of the trenches in Flanders, Lawrence offered a view of the war in Arabia which was at once more romantic and exotic. But the reality of Lawrence was more complex than the courageous, blue-eyed British hero, risking his all for the love of his country and his commitment to the Arab cause against their Turkish oppressors.

Thomas Edward Lawrence was born on 16 August 1888. His father, Thomas Chapman, was heir to an Irish baronetcy, but he had left his wife and four daughters to live with their governess, Sarah Maden. He and Sarah changed their name to Lawrence, and Thomas Edward was the second of their five sons. In 1907, Lawrence won a scholarship to Jesus College, Cambridge, to study History. He later undertook a 1,000-mile walking tour of Syria and became fascinated by the country.

In 1914, he was recruited by military intelligence and when Turkey joined Germany in the war against the Allies, he was posted to Cairo. His subsequent role in the war in the Middle East is described in Seven Pillars of Wisdom.

It is clear throughout the book that Lawrence was well aware that his promises of freedom to the Arabs were hollow; that his job was to get them to fight the Turks at all costs. It is possible that this sense of betrayal and guilt dogged him for the rest of his life.

After the war, he withdrew from public life and became an ordinary aircraftman with the Royal Air Force under the assumed name of Shaw. Here he devoted himself to the development of high-speed launches and a primitive forerunner of the hovercraft.

In 1935, he left the RAF and retired to his cottage in Clouds Hill in Dorset. On 13 May 1935, only ten weeks after his retirement, Lawrence was injured in a motorcycle accident and died six days later. He has become one of the legendary figures of the twentieth century; his bust stands in St Paul’s Cathedral along with those of Nelson and Wellington. Although he was a reluctant leader, and never felt that he fully belonged in either Arabia or as part of the British establishment, he has become, nevertheless, the epitome of the swashbuckling British adventurer.