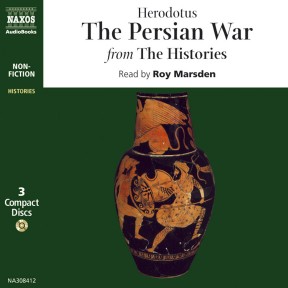 In this, the first prose history in European civilization, Herodotus tells the heroic tale of the Greeks’ resistance to the vast invading force assembled by Xerxes, King of Persia, as recently retold in the feature film 300. Here are not only the great battles – Marathon, Thermopylae, Salamis – but also penetrating human insight and a powerful sense of epic destiny at work. 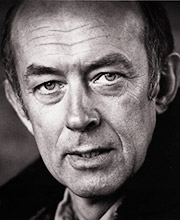 Roy Marsden is perhaps best known for playing Adam Dalgleish in the P. D. James detective series. His other TV credits include Inside Story, Dangerous Lady Agamemnon in Iphigenia at Aulis for the BBC, and Mr Chips in Goodbye Mr Chips. His theatre performances include The Miser, Macbeth and Pygmalion and he directed Vivat! Vivat Regina! at the Mermaid Theatre.

As near to the horse’s mouth, historically, as you’re likely to get to this epic conflict between Greece and Persia circa 480 BC. Herodotus’s Histories (this is a tiny extract) have been regularly plundered over twenty-five centuries by historians from Thucydides to Tom Holland. Forget 300, Hollywood’s take on Thermopylae. Listen to the way Herodotus sets the scene: ‘West of Thermopylae rises a lofty and precipitous hill, impossible to climb, which runs up into the chain of Oeta, while to the east the road is shut in by the sea and by marshes. In this place are the warm springs which the natives call the Cauldrons, and above them stands an altar sacred to Heracles …’ Pithy, informative, entertaining – the real McCoy.

The Original Tale of The 300

This recording is based on the second half of Herodotus’ The Histories, in which he tells the story of the prolonged struggle between the Persian empire of Xerxes and a small group of Greek city states led by Athens. The first half of the Histories describes the growth of the Persian empire: for half a century prior to the outbreak of war with Greece, the Persians had been steadily pushing back the boundaries of their empire until it stretched from Libya and Thrace in the west to the River Indus in the east. This empire also included the Greek states of Ionia, on the eastern shores of the Aegean.

Although the Greeks called the Persians ‘barbaroi’ – barbarians – this was not strictly a pejorative term, but reflected the simple fact that they spoke a language quite unlike Greek. The Persians were in fact a highly civilized and accomplished people, skilful not only in war but also in the arts of peace – they were knowledgeable farmers and gardeners, and administered their territories both efficiently and humanely, provided their subjects were loyal and obedient. The empire enjoyed good communications by land and sea, and was by the beginning of the 5th century BC in a position, it seemed, to annexe Greece as the next stage of expansion.

Herodotus, although respecting the Greeks and especially the Athenians, is quite ready to criticise them when he feels it necessary, and is openly admiring of the best qualities of the Persians. He was himself born in Halicarnassus, one of the Ionian Greek cities under Persian rule at the very time of the wars which he was later to chronicle.

In 499 BC the Ionian Greeks revolted against their Persian masters. Although the Persians eventually suppressed the rebellion, they were not slow to recognise the power and influence of Athens, which had helped the rebels. In 492 King Darius sent his cousin Mardonius against the Greeks, but he enjoyed little success. Now Darius decided to mount an expedition of huge size and strength, one which might conquer all Greece but whose principal objective would be Athens itself, and which would be led by the King in person. Before he could start, however, Darius died and was succeeded by his son Xerxes, who decided to continue the project and finally set out in the spring of 480, crossing the Hellespont by a bridge of boats.

Herodotus carries this great story through both the land battles (Marathon, Thermopylae, Mycale) and those fought at sea (Salamis, Plataea). Throughout this heroic narrative – which effectively describes the salvation of Greek civilization – Herodotus not only delights in the revealing incident, the note of character, but also carries the tale forward with force, authority and style. It is worth remembering that Herodotus is effectively the first European historian – the first, that is, to attempt an objective and properly researched account of real events, as distinct from a fanciful re-working of myth. Of course, he made mistakes, could not always double check his sources (which must primarily have been oral): but his achievement remains remarkable. Thucydides and Xenophon, who came after, could never have written as they did without his example.