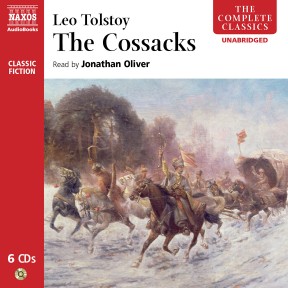 Dissolute, disenchanted Dmitri Olénin decides to join the Army as a cadet and is despatched to the Caucasus. There, he is transformed by seeing how the indigenous people live in harmony with nature, how their lives have more meaning than those of the superficial social elite in Moscow, and he finds a new sense of self and purpose. But nothing is ever quite that simple. Love and loyalty are tested to the very limits in this semi-autobiographical novella, which is one of Tolstoy’s best-loved works.

… And now for something completely different. When you think of Tolstoy, you most likely think of his epic novels, like Anna Karenina or War and Peace. You probably don’t think of his shorter pieces like The Cossacks, a shorter novella that is considered to be the author’s autobiography. The book centers around an unhappy Muscovite nobleman named Dmitri Olénin who joins the army in search of adventure and purpose in his life. He winds up in the Caucasus and is intrigued by the geography and the simple people who live there. Along the way, he discovers himself and falls in love for the first time, and in turn discovers the pain love can bring. We meet a cast of characters that includes the manly Cossack soldier Lukashka, the beautiful Cossack girl Maryanka, and the larger-than-life grandfather figure, Uncle Yeroshka, each of who play an important role in the life education of Olénin. Since this has always been one of my favorite books, I was curious to see how it translated into the audiobook format. The voice work is done by Jonathan Oliver, an English actor who has over a decade of experience reading audiobooks for the blind. At first, I was a little thrown by his English accent, as I know many Russians personally, and I always lent a Russian accent to The Cossacks characters in my mind. But as the story progressed, I got used to Oliver’s accent and it became very natural sounding, as he took on the life of the characters. He also did a wonderful job of changing out his vocal style as each different character spoke, making it easy to tell who was speaking as the conversations took place. I especially liked his portrayal of Uncle Yeroshka, the colorful old man of the Cossack village who takes Olénin under his wing. Oliver’s voice bellows and rings out with intensity, bringing the character to life in incredible fashion. Oliver is obviously very familiar with the story as well as Tolstoy in general, and he adds touches here and there to make the story even more special. For example, he reads the descriptive sections with the same enthusiasm as the speaking roles, painting a perfect picture of the Cossack village and the activities of its inhabitants as they go about daily life. He also sings their songs with a convincing air, staying in character the whole time. As far as classic literature goes, this one is an easy listen. It is not too long, and the story moves quickly, filled with adventure and a touch of innocent romance. Plus, it is a great introduction to Tolstoy without getting lost in the epic length of some of his other works. Highly recommended.

Tolstoy’s novella tells how a young, aristocratic Russian, doing military service among the Cossacks in the Caucasus, learns about life, love, and himself, upsetting his previous notions. Jonathan Oliver performs, rather than reads, varying the voices adeptly from person to person and among men and women, matching speech to how it’s described, providing the proper expression and emotions. His voice is strong; he’s best at Cossack men, especially the rambunctious Daddy Eroshka. The use of strong British accents to represent Russian accents, while reasonable for a British production, may strike American listeners as odd – but it’s the best way to go, and the distraction passes. This is an able reading of a fine, subtle work.

‘The unexamined life is not worth living,’ stated Socrates, who believed that self-examination and the open discussion of truth were essential if a life were to have any value. Tolstoy claimed early in his literary life that the hero of his books was and always would be truth, and his life was dedicated, in an unswerving (and rather unforgiving) way, to his conception of truth. In the process he questioned society’s morals and ethics, the prevailing social, educational and religious conventions, and much else besides. His own life was profoundly examined too, with much of that examination involving agonised self-reproach and angry renunciation.

The reproach and renunciation were over a period of his life during which he lived with abandon, taking advantage of his high status to drink, lie, cheat, gamble (and lose, of course), rob, commit adultery and even murder. Such was his position that this was seen as no more than usual for a man of his class, but for Leo Tolstoy that was never going to be sufficient excuse for failing to find and follow a moral code.

He had always had a rebellious and introspective element to his character. Born into a noble if no longer hugely wealthy family in 1828, he spent his happy early years – and much of his adult life – on the estate Yasnaya Polyana. By the time he went to university, he had experienced the deaths of his father, mother and guardian Aunt Aline, had moved from the country to Moscow, and had developed both a love of European literature and a great linguistic talent. He had also developed an independence of intellect that translated itself into an anti-authoritarian attitude. He left the University of Kazan before graduating, despairing at its conventionality, and started finding out about life for himself. Initially this was through the formalised but none the less wild activities of young noblemen of the time (balls, parties, gambling, duelling, racing); but it went farther, possibly deeper, than that with Tolstoy. There was a kind of demonic addiction to the thrills which sometimes gives his diaries a rather Jekyll-and-Hyde character. He was later profoundly disquieted at his debauchery, wrote endless rules of behaviour and codes of practice for himself, and then failed to follow them, falling again for the brutish attractions of the high life. But he never stopped trying to change himself, and never ceased to be deeply troubled by his moral failings. Perhaps most remarkably, in the end he did change himself; and he was able to put into practice his convictions about life, living and following a personal code of honour and morality. The inspiration for this change was – in part at least – the same inspiration as for The Cossacks.

Much of The Cossacks
is immediately evident
as autobiography

In 1851 his brother Nikolai (an officer in the army) had visited the estate, and Tolstoy took the opportunity to go on a tour of the Caucasus region with him. That tour made an impact on Tolstoy’s life in several crucial ways. He decided to join up, for a start (he had always admired his brother), and his Army experiences were to change his views of himself and the world at large. They would also form the basis for much of the material in his first published writings, and then most famously in War and Peace. And it was his experiences of riding through the Caucasus region that directly inspired The Cossacks, a book which marked a shift in Tolstoy’s range and intention as an author.

Much of The Cossacks is immediately evident as autobiography – a disenchanted nobleman joins the Army, goes to the Caucasus, is swept up in the beauty of the region and the simple goodness of the peasantry, and realises the vapid immorality of the social elite and their doings in Moscow. But Tolstoy spent 10 years working on The Cossacks, which is a long time even for a serving soldier faced with the Crimean War. In the novella, which was eventually published in 1863, Tolstoy developed what was to become a feature of his fictional writing thereafter, a moral searching and open discussion of issues deeply important to the individual as well as to society as a whole. His diaries, his anti-authoritarian sentiments, his self-criticism, his questing for a moral path – all these found expression in the novella, and were to be the foundations of his later fictional work.

Although now revered for his artistry as a writer, in later life Tolstoy was seen more as a prophet. He turned from fiction to essays, tracts and spiritual writings, which in particular advocated non-violence. He had determined that a relatively simple philosophy of life was sufficient guide: live only for God and for others; do no harm; live simply and honestly. Quite apart from this making him a heretic to the Orthodox Church, it also required the abandonment of property and money, and abstinence from drink, meat, tobacco and sex. It left him living as a kind of symbiotic lodger with his wife, Sophia, who had borne much. Despite initially being happy together, after 13 children and the difficulties of living with Tolstoy’s intense, self-hating self-absorption, the couple were famously unhappy. When Tolstoy became a wandering ascetic, this was in part because of his convictions, and also because he found the angry rows at home intolerable. He was taken ill at a train station in November 1910, but refused to allow Sophia in to see him. He died a few days later, still wracked by shame and guilt for having enjoyed wealth and ease at the expense of others. For Leo Tolstoy, even the end of life was not left unexamined.