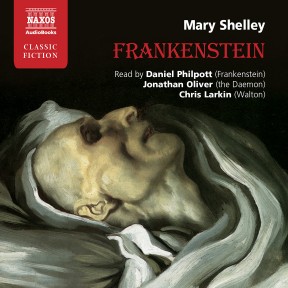 The gothic tale of Frankenstein and his construction of a human being who runs amok has, with the help of numerous films, become one of the most vivid of horror stories. But Mary Shelley’s original novel, written in 1816, dealt more sympathetically with ‘the daemon’, showing how an initially beneficent creature is hammered into a daemon by the way he is treated. Her ideas, and her dramatic but poignant story, is brought to life in this sound dramatisation.

Friends on holiday abroad, holed up by bad weather, pass the time by telling spooky stories by the fireside. It’s a common scenario, but when three of them are Lord Byron, Percy Bysshe Shelley and Mary Wollstonecraft Godwin, Shelley’s dauntingly clever fiancée, daughter of a famous feminist writer and an equally famous philosophical anarchist, they’ll probably come up with something a bit classier than the “dark and stormy night” variety. Byron’s started the vampire genre. Mary’s, published in 1818, became the world’s first sci-fi thriller. Remind your teenage children of this significant fact, or the often OTT language used in this gothic horror story of a murderous man-made monster running amok in the Arctic and sundry picturesque Swiss villages might make them lose heart.