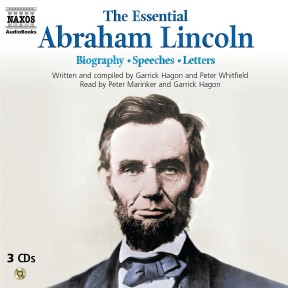 Speeches and letters by Abraham Lincoln

Abraham Lincoln (1809–1865) was one of the most influential presidents of the USA, uniting the country and abolishing slavery after a terrible civil war. On the 200th anniversary of his birth, his life and works are presented here in an easy introductory form. Through a balance of biography and the key speeches and letters, the man is brought to life, demonstrating his keen intelligence and determination, which was maintained all the way to his tragic death at the hand of an assassin.

The biography outlines the career of this lean, 6ft 4in man from the backwoods who became one of America’s greatest statesmen and brought an end to slavery. The eloquence of his speeches and the humanity of his letters are palpable. An authoritative, not sycophantic, narration.

The momentous events of Abraham Lincoln’s presidency coupled with the advent of photography meant that Lincoln’s was one of the best-documented lives of 19th-century American presidents. He wrote letters throughout his life to people of differing backgrounds and ages, even during the intensely busy years of the Civil War; thus we see that he was humane and considerate as well as a decisive and visionary leader.

The existing letters, written in his clear and steady hand, contain nearly a million words penned over three decades, from the early 1830s to his death in 1865. His speeches, too, are well documented: they were given in an age when people flocked to meetings to hear talks of all kinds, though of course notes were also taken of his presentations as a lawyer and a politician. It is clear that Lincoln was aware of the importance of the written word and took care to prepare his talks; occasionally he would slightly rewrite a speech (as with the Gettysburg Address) after having given it, in order to improve it for print.

Despite the growth of photography, there is no pictorial record of Lincoln giving his key speeches. The photographic archive that does exist shows the effect that the responsibility of presidency had on his face, and this, in addition to accounts from friends and observers, gives us a good idea of what the public face of Lincoln was like.

In a talk given shortly after the assassination, William Herndon – friend, law partner and Lincoln’s biographer – said:

Mr. Lincoln thought his speeches out on his feet walking in the streets: he penned them in small scraps – sentences, & paragraphs, depositing them in his hat for safety. When fully finished, he would recopy, and could always repeat easily by heart – so well thoughted, shotted, and matured were they.

We don’t know exactly what Lincoln sounded like, though he evidently had a high voice, accentuated by nervousness in the early part of his career. Herndon, remembering Lincoln in a letter 20 years after the president’s death, said:

Lincoln’s voice was, when he first began speaking, shrill, squeaking, piping, unpleasant; his general look, his form, his pose, the color of his flesh, wrinkled and dry, his sensitiveness, and his momentary diffidence, everything seemed to be against him, but he soon recovered.

On rising to address the jury or the crowd he quite generally placed his hands behind him, the back part of his left hand resting in the palm of his right hand. As he proceeded and grew warmer, he moved his hands to the front of his person, generally interlocking his fingers and running one thumb around the other. Sometimes his hands, for a short while, would hang by his side. In still growing warmer, as he proceeded in his address, he used his hands – especially and generally his right hand – in his gestures; he used his head a great deal in speaking, throwing or jerking or moving it now here and now there, now in this position and now in that, in order to be more emphatic, to drive the idea home. Mr. Lincoln never beat the air, never sawed space with his hands, never acted for stage effect: was cool, careful, earnest, sincere, truthful, fair, self-possessed, not insulting, not dictatorial; was pleasing, good-natured; had great strong naturalness of look, pose, and act; was clear in his ideas, simple in his words, strong, terse, and demonstrative; he spoke and acted to convince individuals and masses; he used in his gestures his right hand, sometimes shooting out that long bony forefinger of his to dot an idea or to express a thought, resting his thumb on his middle finger. Bear in mind that he did not gesticulate much and yet it is true that every organ of his body was in motion and acted with ease, elegance, and grace, so it all looked to me.

Lincoln certainly possessed a natural eloquence, a clear logical mind for progressive argument, and an unmistakable charisma, helped by his imposing 6’4” form. His speeches regularly lasted for two hours or more. As one report of such a presentation in 1860 points out: ‘Mr. Lincoln spoke nearly two hours and we believe he would have held his audience had he spoken all night.’ (The Inquirer, 8 March 1860)

His close friends saw him more intimately, and revealed the human yet highly principled aspects of Lincoln’s personality. Joshua Speed, a friend of long standing, from the Kentucky days, recalled:

Mr. Lincoln’s person was ungainly. He was six feet four inches in height; a little stooped in the shoulders; his legs and arms were long; his feet and hands large; his forehead was high. His head was over the average size. His eyes were gray. His face and forehead were wrinkled even in his youth. They deepened with age, ‘as streams their channels deeper wear.’ Generally he was a very sad man, and his countenance indicated it. But when he warmed up all sadness vanished, his face was radiant and glowing, and almost gave expression to his thoughts before his tongue would utter them.

In April 2008, one of Lincoln’s letters sold for a record $3.4m (£1.7m) at auction in New York. This letter, dated 5 April 1864 and sent from the Executive Mansion, Washington, was an answer to a document entitled: ‘Children’s petition to the president asking him to free all the little slave children in this country’. Lincoln replied:

‘Please tell these little people, I am very glad their young hearts are so full of just and generous sympathy, and that while I have not the power to grant all they ask, I trust that they will remember that God has, and that, as it seems, He wills to do it.’