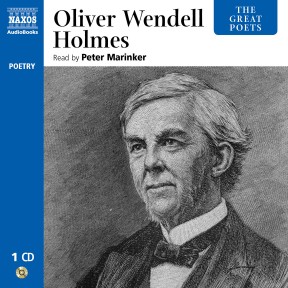 Though by profession a doctor (he coined the word anesthesia) Oliver Wendell Holmes (1809-1894) was one of the leading 19th century American poets and a member of the famous Saturday Club with Emerson, Longfellow and Lowell. 2009 is the 200th anniversary of his birth. Here are his major poems, including Old Ironsides and The Last Leaf in a rare audiobook collection read affectingly by Peter Marinker.

Oliver Wendell Holmes (1809–94), by profession a doctor and once up there with Longfellow and Lowell, has a strong line in patriotism and rousing rhythms: “Nerveless the iron hand/ Raised for its native land.” He’s homely and romantic too, praising nature and “Yankee girls” and seeing majesty in a caged lion.

Fashions change in poetry just as they do in music or clothes. Once, Oliver Wendell Holmes was all the rage, and counted Poe and Lincoln among his admirers. Now, except perhaps for Old Ironsides and The Chambered Nautilus, he is remembered mostly as the father of the Supreme Court justice. Often witty, rarely personal, Holmes’s poetry has passed into the realm of the specialist and historian. Yet in Peter Marinker’s sensitive readings, the many charms of these poems emerge. Marinker lets the meter and rhyme stand on their own, speaking in sentences rather than forcing the lines and respecting the sentiment without falling into sentimentality.

Oliver Wendell Holmes (1809–1894) de-scribed it in his poem A Metrical Essay, and he himself had it in abundance: poetic sense. He could apply his gift to almost any subject – to love, nature, patriotic and religious themes, to a glass of wine, a punch bowl, a cherished college fraternity, even to a stethoscope. Rhyme and metre came easily to Holmes. In a preface to his poems he may have modestly disclaimed some of his early work as too ‘schoolboy-like’, with ‘questionable extravagances’, but he was always immensely readable, humane and sensitive, and he became one of the most popular poets of his age.

Holmes was one of the illustrious ‘Brahmins’ of the US East Coast in the nineteenth century. They were called the ‘Fireside Poets’ and they numbered among them Henry Wadsworth Longfellow, William Cullen Bryant, and John Greenleaf Whittier. These were cultivated poets who, though they paid homage to their British forebears, gave America a sense of literary stature and its own voice. They wrote poems which ordinary families could enjoy around the hearth and which became favourite recitations in schools and on public platforms. Holmes also wrote several hymns which became popular across the country. He was an admired conversationalist, courted in social circles at home and, when he visited England, by artists and aristocrats.

The eclecticism of Holmes’s poetry was mirrored in the remarkable diversity of his own achievements: he was not only a successful poet but also a highly skilled doctor and was Professor of Anatomy and Physiology at Harvard Medical School. His innovative research into puerperal fever, a deadly disease suffered by women in childbirth, led to invaluable changes in obstetrics hygiene. He trained for a while as a lawyer before devoting himself to medical studies, first at Harvard College and later with a famous doctor in Paris. When his schedule permitted, he was an entertaining public lecturer and even had time to develop a stereoscope that showed pictures in an early form of 3D. A devoted family man, he helped to set his son, Oliver Wendell Holmes, Jnr, on the road to becoming one of the country’s most famous Supreme Court judges and an expert in jurisprudence.

As well as composing more than 150 poems, Holmes wrote novels, was a co-founder of, and regular contributor to, the literary journal The Atlantic Monthly, and his witty essays – beginning with The Autocrat at the Breakfast Table – were hugely enjoyed. He also coined many aphorisms that became popular, such as: ‘Truth is tough. It will not break, like a bubble, at a touch; nay, you may kick it about all day, like a football, and it will be round and full at evening.’

In his wide range of subjects, as well as in his verse style, Holmes followed in the tradition of the great Romantic British poets. He would have approved of William Wordsworth’s dictum that: ‘The Poet binds together by passion and knowledge the vast empire of human society, as it is spread over the whole earth, and over all time. The objects of the Poet’s thoughts are every where.’

Holmes, like the Romantics, revered nature, especially in the surrounding areas where he lived. He was born on 29 August 1809, in the village of Cambridge, Massachusetts, and he lived for most of his life in New England. It was a beautiful, semi-rural setting which he often wrote about, sometimes concentrating on the flora and fauna, as in his playful To an Insect, and sometimes creating from nature a metaphor for life, as in The Two Streams. His father, the Reverend Abiel Holmes, was a considerable scholar and a pastor of the local church, and Holmes grew up in an environment that mixed the academic with rusticity. Although it was unlikely that he could see the coast from his village, many of his poems, such as The Wasp and the Hornet, have the zest and salt-tang of the sea, or the vivid detail of life on board ship, as in The Steamboat and Sun and Shadow.

It was a war-torn ship, the illustrious USS Constitution – which was under threat of being scrapped – that inspired Holmes’s most famous poem, Old Ironsides, a paean to her battles and the men who manned her. Written when he was 21, it became a national rallying cry; its success saved the old ship and convinced Holmes to continue his career in poetry.

The house in which Holmes was raised had a history dating back to the American Revolutionary War, and in June 1775 soldiers had stopped on its doorstep to be led in prayer before leaving for the battle of Bunker Hill. Some of Holmes’s poems, such as God Save the Flag and Lexington, reflect the fierce independence and patriotism of his New England Puritan ancestors. Amidst the carnage of the Civil War, Holmes wrote his own prayer for victory and peace in A Voice of the Loyal North. His son fought in the war, survived three wounds, and rose to the rank of Captain in the Twentieth Massachusetts infantry. Both father and son shared a deep sense of history, as described in The Pilgrim’s Vision, and both were determined to defend the freedom they had inherited.

The romantic side of Holmes is revealed in poems such as The Parting Word, a bittersweet comment on unrequited love, while in later poems (Portrait and At My Fireside, for example), he indulges in a gentle melancholy. By way of contrast is the rollicking verse he wrote on special occasions, such as Song to the Temperance Ladies and Our Indian Summer, and his lusty praise of Our Yankee Girls.

All Holmes’s poetry is enlivened by his satirical take on the world, and his keen sense of humour. In Contentment, for instance, he comments on society’s acquisitiveness and in Daily Trials by a Sensitive Man he wrestles with a very modern problem: the noise of daily life. He writes of the deep bonds of friendship in his much-quoted Bill and Joe and writing in early life he speaks tenderly of old age in The Last Leaf. Later, in Departed Days and At My Fireside, he is comfortingly reflective on the passage of time.

In The Chambered Nautilus, the poet meditates upon a sea mollusc that discards the ‘chambers’ of its spiralled shell as it grows. Holmes saw in it the progessive advancement of human beings shedding their protective shells as they mature in life. It was fitting, then, that he chose the nautilus as his bookplate crest, with the motto: Per ampliora ad altiora (‘Through breadth to depth’).

Holmes died at the age of 86 in his home in Boston, whilst talking to his son. In The Poet at the Breakfast Table he had written: ‘I don’t despise reputation, and I should like to be remembered as having said something worth lasting well enough to last’. He did. And he is.