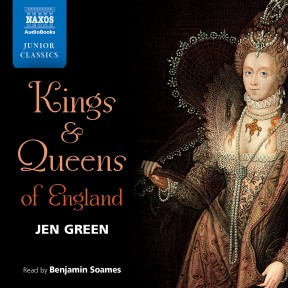 Kings and Queens of England

Which king liked to bathe while the band played Rule Britannia? Which queen was so fat she needed a hoist to get on the throne? Which prince shut his wife out of Westminster Abbey to prevent her from being crowned? Who was the blood-thirstiest monarch of them all? Kings and Queens of England is a no-holds-barred account of the British monarchy with the gossip and gore left in, and nothing left out! It leaves no stone unturned in its mission to portray kings and queens as they really were, warts and all.

Benjamin Soames narrates this short history of the British monarchy at an even, measured pace. He effectively uses vocal expression to help keep young listeners focused. Still, this brief work covers a thousand years of history, so most listeners will miss some details. Even those who get lost amid the names and dates will find the flow again when Soames slows down for the meatier moments – a description of drawing and quartering, for instance, or an account of the probable murder of two child princes. Providing more than facts, both Green and Soames convey the personalities of various rulers.

Jen Green, English editor and author of over 250 books, most for children ages 5–15, has condensed about 1,000 years of English history into two audio discs. Fifty-eight rulers include dynasties from 871 to the present. These dynasties are: Saxon, Normans, Plantagenets (both Lancastrians and Yorkists), Tudors, Stuarts, Hanoverians and finally Windsors. Scandals, murders, incompetence, insanity, illegitimacy and overeating are included. England was first ruled by Alfred of Wessex in 871; foreigners included a Viking, Canute, from Denmark in 1016 and a Norman (who was really a Viking), William the Bastard, in 1066; Henry II, the first Plantagenet in 1154, founded a dynasty which lasted 330 years and boasted 14 kings; Henry VIII, famous for his six wives; Elizabeth I, the last Tudor, who reigned for 45 years; Charles I, the second Stuart monarch, famously beheaded and replaced by the interregnum of Oliver Cromwell; William of Orange, from the German House of Hanover, was invited to rule England in 1714; George I, II, and III, who lost the American colonies, were not very bright; Victoria became queen in 1837 and ruled until her death in 1901; Edward VIII gave up the throne for the woman he loved; and finally Elizabeth II was crowned on television in 1953. There is mention of Charles and Diana, Diana’s death, and the marriage of William and Kate Middleton. Green includes wars, royal popularity, politics, religion and tidbits such as the queen who was so fat she had to be hoisted onto the throne. Benjamin Soames narrates, adding accents and individualising voices. Soames, who trained at the London Academy for Dramatic Arts, is a capable and convincing reader. He even manages to get through the mnemonic poem that includes the names of each of the rulers. Appropriate for junior and senior high students.

In 2012, Queen Elizabeth II celebrated her diamond jubilee. Bells rang out, bands played and parties were held in towns and villages across Britain to celebrate sixty years of Elizabeth’s reign.

Sixty years before, the young princess had taken her coronation vows. She had made a solemn oath to govern the peoples of the United Kingdom and its territories abroad according to their laws and customs. She promised to maintain the Church of England – a church founded by her predecessor, Henry VIII. She was then anointed with holy oil and raised to queenly status in a ceremony that also stressed her duty to be a faithful servant of her people.

Through this ceremony in 1953, Elizabeth took her place in a long line of monarchs stretching back to William the Conqueror and beyond, to the first Anglo-Saxon kings of England. Monarchs are relatively rare nowadays, after over two centuries of republican movements. Of 200-odd countries in the world, only 44 have a monarch, and of those, sixteen are in the British Commonwealth – the association of states that were once Britain’s empire – so Elizabeth is their queen, too.

The British monarch has many duties. She or he is Supreme Head of the Church of England and Commander-in-Chief of Britain’s armed forces. This last title harks back to the days when British rulers led their armies into battle – and won glorious victories if they were lucky. Victorious monarchs were always very popular. Unfortunately the reverse was also true: if they were defeated, their own popularity was likely to dip severely.

Traditionally, the monarch is also head of the justice system and the civil service, including the secret service. The queen receives certain types of intelligence before the Prime Minister. In practice, the British monarch’s role is mainly ceremonial. It is Parliament that governs Britain. The Church of England, civil service, army and justice system run themselves. The monarch’s role is restricted to what has been called the ‘dignified bit’ – giving out honours, presiding at banquets and representing Britain abroad. Nonetheless, many people see the queen and her family as one of Britain’s greatest assets, encouraging tourism and promoting Britain’s image abroad.

Since the 1520s British monarchs have styled themselves ‘Defender of the Faith’. The first king to be called this was Henry VIII, and the faith in question was Catholicism. This is ironic in view of the fact Henry later broke with the Catholic church to set up his own brand of Christianity. And all for the most personal of reasons – because he wanted to divorce one wife and marry another.

Since the days of Anglo-Saxon kings, English monarchs have ruled with the help – or hindrance – of a council or parliament. In fact, the history of Britain’s kings and queens reads as one long power struggle between monarchs and their parliaments, as each sought to gain the upper hand. In the 1630s King Charles I tried to rule without Parliament altogether. Civil war followed. The king was captured, tried and beheaded for treason. After just eleven years as a kingless republic, the monarchy was brought back, but ever after, British monarchs had to bow to the will of the people, represented by Parliament.

Britain is a hereditary monarchy. This means the office passes down within the royal family. Throughout history, it has always passed to male heirs in preference to females. Very few queens have ruled in their own right. Despite this, some of Britain’s most famous and best-loved rulers have been women. In 1588 on the eve of invasion, Queen Elizabeth I rallied her troops dressed in a soldier’s breastplate, claiming to have ‘the body of a weak and feeble woman; but the heart and stomach of a king’. In the 1800s Queen Victoria presided over the greatest empire the world has ever known. Both queens gave their names to the age in which they lived.

Throughout her reign, the present queen has carried out her duties with dignity and dedication. But in days gone by, this has not always been so. More than a few monarchs have preferred activities such as gambling, drinking and having love affairs to the sober business of ruling. And not all have been dignified. Some were famous for swearing, sloppy table manners or making tactless remarks.

Queen Elizabeth’s reign has now lasted longer than many people’s lifetimes. The last sixty years have seen amazing changes, including the birth of space travel, the arrival of personal computers and the world wide web. Throughout these long years the queen has worked to keep the monarchy up to date. In the 1960s a TV documentary allowed people to glimpse the monarch’s private life for the first time.

In July 2012 the queen opened the London Olympic Games. The opening ceremony included a film with the queen in the starring role, briefing the arch-spy James Bond, played by Daniel Craig, on a new secret mission. She then boarded a helicopter and appeared to parachute down into the Olympic Stadium! Through this performance the 86-year old queen showed her sense of humour. She also showed her ability to reflect the public mood and show off the best of Britain. In future, the monarchy will continue to evolve to keep pace with the times.