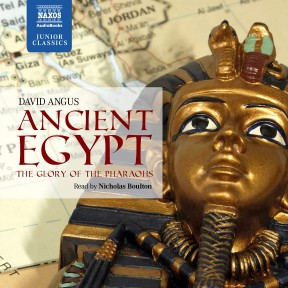 Ancient Egypt – The Glory of the Pharaohs

Ancient Egypt – The Glory of the Pharaohs tells us about civilisation under the pharaohs, of mysterious statues and tombs, incredible obelisks, the Sphinx… In this recording, the ancient Egyptian kingdom is brought to life in a way that fuels the listener’s imagination, teaching and entertaining in equal measure.

Ancient Egypt – The Glory of the Pharaohs is the unabridged audiobook rendition of David Angus’s classic non-fiction exploration of the incredible ancient civilization of Egypt. Egypt’s grand statues, gigantic tombs, towering obelisks, legendary pyramids, and ineffable Sphinx are all vividly described and explained. Listeners of all ages will thoroughly enjoy this exciting and educational audiobook, smoothly narrated by award-winning radio performer Nicholas Boulton.

Some of the most striking images from the ancient world come from Egypt. Every time we see the pyramids; or pictures of pharaohs, their families and their servants, or their writing, the colourful hieroglyphics, we immediately know they come from the ancient dynasties of Egypt.

This is partly because Egyptian building and Egyptian art is so distinctive! It is unlike anything else in the world. Take the pyramids. Pyramids were built by other cultures, especially in South America, but when we think of them, the first image that comes to the mind’s eye is The Great Pyramid of Cheops (146.59 metres high) near Cairo. The sphinx was quite a common statue in ancient civilisations, but again the first to come to mind is The Great Sphinx of Giza, with its strong lion’s body and human head. Though built around 2,550 BCE, it is still the world’s largest monolith statue, standing 20.22 metres high and 73.5 metres long. Despite its history, we know very little about it – we don’t even know who was the model for the face, and why it was built. Though time and sand has worn away the face, and some detail on the body, it is still a remarkable sight. No matter how many photographs you may have seen, you will never forget the first time you stand under it and look up. You feel you are standing in the shadow of history.

We know a lot more about the kings and queens who were mummified and buried in The Valley of The Kings near Luxor in Upper Egypt, or, as it used to be called, Thebes. Luxor stands on the east bank of the Nile. Thebes was the grand capital of the New Kingdom, the city of Amon-Ra, and there are many indications of its grandeur. The Temple of Luxor, with its massive pylons (the gateways to the temple with its tapering towers) is immediately impressive, as is the huge statue of the sitting Ramesses II.

Go further along the river (if you want to have the real Egyptian experience, you can walk in the hot sunshine – it will take you just under an hour) and you come to the even larger and more elaborate temple complex of Karnak.

Karnak was built over many years: work on temples and structures started in the Middle Kingdom (2055 BCE–1650 BCE) and continued into the Ptolemaic period (305 BCE–30 BCE), ending when Roman rule began.

Karnak comprises not just one temple, but many, including the Precinct of Mut, the Precinct of Montu and the Precinct of Amun-Ra (all were ancient gods and goddesses). It is this area which is perhaps the most unforgettable, for it is here we visit the Great Hypostyle Hall, with its 134 massive pillars, arranged in rows of 16. The combination of the number, the height, and the fact that each of the pillars is decorated with elaborate carvings, makes it an awesome environment. It is difficult to imagine the immensity of it all: even when you stand in the middle looking up, it is almost beyond belief to think that this was the product of architects and artisans of the highest quality thousands of years ago.

If you stand on the east bank of the Nile by the Temple of Luxor, and look across the water, where dhows (the boats with the Egyptian lateen sails) can still be seen, as they have been for millennia, you are less than an hour away from The Valley of the Kings. There are some trees and a few houses on the west bank, but go a little further and you find yourself in the desert – not flat sand, but a mixture of rock, hills and sand. It was here, over many centuries, that the ancient Egyptians brought the deceased bodies of their Pharaohs, their families and their dignatories to be buried. Over the last few centuries, many of these burial tombs have been discovered and opened up so that we can experience them first-hand.

Most visitors go by tour bus, or hire a taxi. Another way is to hire a bicycle and cycle through the valley (taking lots of water!). You then have the contrast of the quiet intense heat as you journey from tomb to tomb, with the cool, dark interior of the tombs themselves. These vary. Some are relatively flat and near the surface, so you can go through an entrance and see, almost immediately, the highly coloured and decorated walls, telling the life story of the person buried there, or the tales of Horus and Ra and the other deities with rows and rows of hieroglyphics. Sometimes, you find yourself going deep into the earth, down dimly lit wooden staircases, with tight passages and cool air (getting colder the deeper you go) until you come to a great chamber carved out of the rock. The paintings down here are breathtaking in their design and perfect condition, for in the dark no wind, rain or sunlight has touched them. They are as perfect as when they were first painted!

Most of the tombs are empty, only a few have furniture or burial paraphernalia still there. Most things found have been taken to museums in Luxor or Cairo. However, when you go to the tomb of Tutankhamun, you can still see the young pharaoh’s mummified body, where it was when the English archaeologist Howard Carter discovered it in 1922. A visit to The Valley of the Kings creates an unforgettable impression. Another way to view it is by hot-air balloon. You go to the west bank just before dawn, assemble by the balloon, and rise in the air with the sun, floating over the Colossi of Memnon – the two enormous seated statutes that guard the way to the Valley – and from here you can see the broad compass of the Temple of Hatshepsut.

Despite its antiquity, the world of ancient Egypt has survived so well partly because the civilisation lasted for so long and there was so much of it; partly because, being in a dry desert environment, even delicate materials such as papyrus withstood the weathering of time; and partly because so much was underground! And while we can see so much in museums and pictures on the internet, nothing can compare with seeing the statues, the pyramids and the tombs in real life.