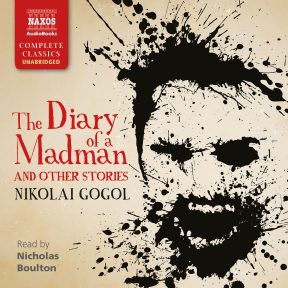 The Diary of a Madman and Other Stories

The Diary of a Madman and Other Stories is a bizarre and colourful collection containing the finest short stories by the iconic Russian writer Nikolai Gogol. From the witty and Kafkaesque The Nose, where a civil servant wakes up one day to find his nose missing, to the moving and evocative The Overcoat, about a reclusive man whose only ambition is to replace his old, threadbare coat, Gogol gives us a unique take on the absurd. Gogol’s tales of inconsequential civil servants, mixing the everyday with the surreal, foreshadow the work of his later acolytes, Bulgakov and Kafka. None is more cutting than the main story, The Diary of a Madman, where a government clerk descends to insanity, claiming that he can communicate with dogs and that he is next in line to the throne of Spain.

Boulton’s smooth British accent may seem off for these odd Slavic folktales at first, but with a story about a nose that grows to the size of a man and climbs the ladder of Russian bureaucracy, who’s to say what’s odd? What counts is that Boulton’s pacing is terrific, his pronunciation of Russian names is comfortingly accurate and his sense that the world is one big absurdity is palpable.

Nicholas Boulton can narrate an extended dialogue and make it seem indisputably between two people. He does so in this collection of Gogol stories, for which he produces a wide array of voices and characters. He takes full advantage of opportunities to inhabit the characters. In typical British fashion, he uses a skilful range of accents to indicate class differences. In many of the stories, whether realistic, absurdist or fantastic, Gogol maintains a wry, winking tone (no matter the events of the story) that Boulton conveys by imbuing the reading with a sense of amusement or good cheer. His performance enlivens these stories, familiar (The Overcoat) or obscure, and keeps them entertaining.