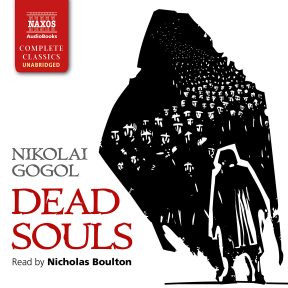 Gogol’s great Russian classic is the Pickwick Papers of Russian Literature. It takes a sharp but humorous look at life in all its strata, but especially the devious complexities in Russia with its landowners and serfs. We are introduced to Tchitchikov, a businessman who, in order to trick the tax authorities, buys up dead ‘souls’ or serfs whose names still appear on the government census. Despite being a dealer in phantom crimes and paper ghosts, he is the most beguiling of Gogol’s characters. Gogol’s obsession with attempting to display ‘the untold riches of the Russian soul’ eventually led him to madness, religious mania and death. Dismissed by him as merely ‘a pale introduction to the great epic poem which is taking shape in my mind’, Dead Souls is the culmination of Gogol’s genius.

Justly regarded as a seminal masterpiece of Russian literature, Gogol’s 1842 novel of an opportunistic schemer who tours the provinces drawing in his gullible countrymen by means of their own prejudices and pretensions has lost none of its trenchant force. Reader Boulton deftly navigates the playful digressions of a stylist who raised the run-on sentence to an art form, voicing Gogol’s omniscient, bemused, and often-perplexed narrator in a smooth, urbane baritone well suited to the elegant reserve of Constance Garnett’s 1922 translation. The episodic swindles of antihero Chichikov unveil a rogue’s gallery of folly, hubris and venality, and Boulton ably and with relish inhabits a varied cast of serfs, landowners, bureaucrats, generals, nobles, and even a horse. Listeners new to Dead Souls may be surprised by the fragmentary state of its second half, but more than enough satiric brilliance remains to make this unabridged recording a highly recommended purchase for most libraries.

Nikolai Vasilievich Gogol was born in the Ukraine on March 31, 1809. After leaving school, where he edited a manuscript periodical, he went to St Petersburg with the intention of becoming an actor. But his voice was not sufficiently strong and he was obliged to give up this ambition. He worked briefly as a clerk in a government department but soon resigned the position. His first published work was a poem written under a pseudonym, but it was ridiculed so much by reviewers that he bought up all the copies he could find and burned them. He decided to go to America, and started out on his journey, but only got as far as Lübeck before returning to St Petersburg, where he joined the Civil Service.

In 1831 Gogol published Evenings at the Farm of Dikanka, a collection of stories about Ukranian rural life, which was well received. At this time he met Pushkin, who admired his talent and encouraged his literary ambitions. His plan (never carried through) to write a history of the Ukraine won him a Chair of history at St Petersburg University, but it was an absurd appointment. He was entirely unsuited to an academic life and soon resigned. In the meantime he had published a new series of stories including Taras Bulba, a Homeric prose poem, and his famous story The Cloak, which has been recognised as the starting point for the Russian novel.

In 1835 came his stage play, The Revizor, known in English as The Inspector General or The Government Inspector. The play’s great success was remarkable, in that it presented a bitingly satirical view of Russian provincial bureaucracy and small-town life. The Tsar, Nicolas I, not only gave his permission for the piece to be acted, but roared with laughter and led the applause. He sent Gogol a gift of money, insisting he was not to be told where it came from in case he should feel obliged to adopt a more respectful point of view in future.

After the production of The Revizor, Gogol went travelling abroad, and spent most of the rest of his life away from Russia. He was often in Rome, but never stayed  long in any one place – a restlessness he attributed to his Cossack blood. His Selected Passages from a Correspondence with Friends, published in 1847, provoked considerable debate. He was bitterly attacked by the radicals who felt betrayed by him.

In 1848 he made a pilgrimage to Jerusalem in search of peace for his tortured spirit, but failed to find the comfort for which he yearned and returned to Russia. In Moscow he fell under the influence of a fanatical priest who persuaded him that his fictional writing was sinful. He gave away everything he owned of value and went about with his few possessions, including his hostile newspaper reviews, in a small bag. He became depressed and destroyed a great deal of his work, including much of the second part of Dead Souls. He spent his last days praying and fasting, and died on February 21, 1852.

Sadly, the second part of the novel is far from complete. At the end of his life, suffering from mental anguish and religious fervour, Gogol came to repent what he had written and burned several chapters of Part Two. Although what is left is a substantial book, the narrative is broken and discontinuous. References are made to plots and characters whose origins have disappeared, and the results are confusing. The ending is abruptly curtailed and we are left dangling in mid-sentence.

However, there are compensations to be had for those who wish to continue to accompany Tchitchikov on his bumpy journey. Lyrically descriptive passages of the Russian landscape and of peasant life are outstandingly beautiful, and Gogol introduces yet more vividly drawn characters.

There is always an undertow of seriousness behind Gogol’s humour, and this is nearer the surface in Part Two. Possibly as a result of negative criticism from some quarters when Dead Souls first appeared, Gogol seems to have been at pains to assure his readers of his patriotism, and to emphasise that his satirical depiction of Russian life was motivated by love of his motherland and not by disloyalty. Unlike Part One, where we find many amusing characters but would be hard put to find a sympathetic one, Part Two contains several admirable figures who are energetic, capable and idealistic, and one who is virtually saintly. But they are all seen against the background of a system which is decadent and corrupt.

In the final chapters, when his hero has finally been found out and flung in jail, Gogol introduces an almost saintly character in the person of the landowner Murazov, who struggles with Tchitchikov for his soul. Murazov almost persuades him that it is his duty to repent and take his punishment, but as soon as he leaves, and Tchitchikov is offered the opportunity to bribe his way out of trouble, he succumbs, and sets off once again on his travels.

It is as if Gogol is struggling to reform Russia by reforming the character of his hero but, not surprisingly, the task was beyond him. Russia was to undergo a seismic upheaval caused by the faults in its society so vividly depicted by Gogol, and is still to arrive at the golden age he envisaged. As for reforming Tchitchikov, an author who creates a character so vivid and alive may find himself at the mercy of his own creation. Despite Gogol’s attempts to make Tchitchikov repent, it would seem that the personality with which he had endowed his hero was too powerful to be changed, and the amiable reprobate stubbornly reverts to his old ways. And for all Gogol’s despair at seeing the dishonesty and chicanery of the Tchitchikovs of this world winning, we sense that there is something in the author’s Cossack soul that rejoices in his hero’s freedom as he breaks out of captivity, and sets off once again, galloping down the road in search of further adventures.