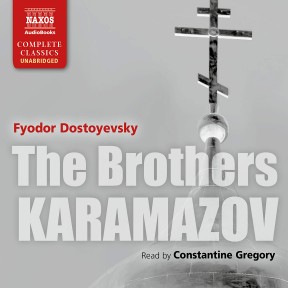 Fyodor Dostoyevsky is a titanic figure among the world’s great authors, and The Brothers Karamazov is often hailed as his finest novel. A masterpiece on many levels, it transcends the boundaries of a gripping murder mystery to become a moving account of the battle between love and hate, faith and despair, compassion and cruelty, good and evil.

Dostoyevsky was born in Moscow on November 11, 1821. His father was an impecunious doctor and his mother the daughter of a merchant. When he was sixteen his mother died and he and his elder brother Mikhail were sent to St Petersburg to study at the army college of engineering. During his three unhappy years there, he spent his free time reading the works of the most important Russian and foreign authors. In 1844 he resigned from the army and his first novel, Poor Folk, was published the following year.

An incident in which Dostoyevsky witnessed an aristocrat beating his coachman mercilessly for not driving fast enough had a powerful and lasting effect on him. His revulsion at the injustices of Russian society, especially the system of serfdom, led him into circles where revolutionary ideas, such as liberating the serfs and abolishing censorship, were current.

In 1849 he was arrested and tried with the others of his group, and sentenced to death. After eight months’ imprisonment, the death sentence was commuted by Emperor Nicholas I to four years’ hard labour, to be followed by four years’ service in the army as a private. But this information was not conveyed to the prisoners, who were taken out onto the parade ground and made to go through the preliminaries of an execution. Dostoyevsky described the experience in a letter to his brother:

They snapped swords over our heads, and they made us put on the white shirts worn by persons condemned to death. Thereupon we were bound in threes to stakes, to suffer execution. Being in the third row I concluded I only had a few minutes of life before me. I thought of you and your dear ones, and I continued to kiss Plestchaeiv and Dourov who were next to me and to bid them farewell. Suddenly the troops beat a tattoo, we were unbound, brought back upon the scaffold, and informed that his Majesty had spared our lives.

His father
was a cruel
and merciless
master to
his serfs

One of the prisoners went mad as a result of the experience. For Dostoyevsky it was an event which was to leave an indelible mark on his life. He was put in chains and sent off to Siberia to carry out his sentence of four years’ hard labour. At the end of this period he was transferred to a small town where he served as a private soldier in a line regiment. Here he fell in love with the wife of a civil servant who subsequently died. Despite the fact that she was in love with another man, she allowed herself to be persuaded by Dostoyevsky to marry him, for the sake of her son. Not surprisingly, the marriage was not a success. By this time he had become a commissioned officer, but he was obliged to resign from the army as a result of his increasing attacks of epilepsy.

Dostoyevsky returned to St Petersburg where, over the next twenty years, he wrote his most important works, including Crime and Punishment (1866), The Idiot (1869), The Possessed (1872) and The Brothers Karamazov (1880).

Three years after the death of his first wife in 1864, Dostoyevsky married the young woman he had engaged as his secretary. His financial affairs were in turmoil, and he and his new wife were forced into exile to escape their creditors. The couple spent the next few years living in Germany, Switzerland and Italy, during which time two children were born to them, only one of whom survived. As their financial situation began to improve they returned to Russia, where two more children were born, but the youngest child suffered from epilepsy and died at the age of three.

During the years following his release from prison, Dostoyevsky’s political and religious opinions became more and more reactionary, and his acceptance in 1872 of the editorship of a conservative periodical, The Citizen, marked his final rejection of his youthful revolutionary beliefs. He died in St Petersburg on February 9, 1881.

The Brothers Karamazov is often referred to as Dostoyevsky’s greatest novel. On a superficial level the story is an intriguing ‘who-done-it’, with a dramatic trial scene as its finale. But Dostoyevsky, like Shakespeare, was able to address more than one audience at a time – in this case not just the groundlings in the pit or the aristocrats in the boxes, but the different audiences which we, his readers, have within us. As one part of us is enjoying The Brothers Karamazov at the level of an exciting crime thriller, our deeper selves are engaged in the consideration of such primal and universal themes as the existence of God, sexual passion, jealousy, sibling rivalry, patricide, cruelty, evil, poverty and shame.

The characters of the three brothers themselves may be seen as embodying different aspects of human personality; Dmitri, passionate and uncontrolled, Ivan, proud and self-deluding, and Alexey, pure and compassionate. And woven through the thread of the narrative, the idea which would later be developed by Freud as the Oedipal theory, the wish of the son to overthrow and kill his father.

Reasons for these particular sons to murder this particular father are heavily weighted by the author – Fyodor Pavlovitch Karamazov is the most negligent of fathers and a thoroughly repulsive character. Dmitri considers he has cheated him out of his inheritance and is wildly jealous because he is attempting to steal the woman he loves. Ivan’s intellectual atheism results in the stifling of his conscience, especially where it concerns getting rid of his father, and leads to his eventual mental breakdown. Only Alexey’s unswerving belief in God and the essential goodness of man prevents him from wishing to take revenge for his father’s cruel treatment of his mentally fragile mother.

If we examine Dostoyevsky’s own history, it is clear that many of the themes, situations and characters in the book are drawn from experience. His father was a cruel and merciless master to his serfs, by whom he was eventually murdered. Dostoyevsky draws on his personal experience of epilepsy in order to describe Smerdyakov’s medical condition. The story of the death of Grigory and Marfa’s infant child echoes the tragic early deaths of two of his own children. Ivan’s resistance to belief in God reflects Dostoyevsky’s tormented struggle with his religious doubts, whilst Alexey’s unshakeable faith represents the calm assurance he wished to achieve.

But in the end, attempts to draw analogies with Dostoyevsky’s own experience are of limited value because, as with every great artist, the author’s achievement is to have used the raw material of life to create an enduring work of art. The Brothers Karamazov is such a work, one which transcends the limitations of skilful storytelling to become a universal representation of the human struggle, a compassionate study of man’s battle with his baser instincts, and his courageous attempts, frequently doomed to failure, to grow upwards, out of the darkness and into the light.