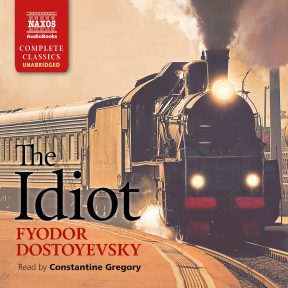 Prince Lyov Nikolayevitch Myshkin is one of the great characters in Russian literature. Is he a saint or just naïve? Is he an idealist or, as many in General Epanchin’s society feel, an ‘idiot’? Certainly his return to St Petersburg after years in a Swiss clinic has a dramatic effect on the beautiful Aglaia, youngest of the Epanchin daughters, and on the charismatic but wilful Nastasya Filippovna. As he paints a vivid picture of Russian society, Dostoyevsky shows how principles conflict with emotions – with tragic results.

‘I know for sure that if I had two or three secure years for this novel… I would write a work that they would talk about for a hundred years.’ So said Dostoyevsky as he struggled to bring The Idiot into existence, and sure enough it has lasted longer than the hundred years he predicted. In his creation of Prince Myshkin, The Idiot, a character seeking perfection and yet fraught with ambiguity, Dostoyevsky anticipated the universal metaphysical unease of succeeding generations, and produced an unforgettable masterpiece.

Fyodor Mikhailovich Dostoyevsky was born in Moscow in 1821. His father was a physician and he was the second son of seven children. After leaving school he studied at the Military Engineering College in St Petersburg, graduating as an officer. His first story was published to great acclaim in 1846, but in 1849 he was arrested and sentenced to death for his involvement in the ‘Petrashevsky circle’, a group of naive, radical intellectuals who modelled themselves on French socialists such as Fourier. The Tsar ordered a public ‘execution’, an eloquent account of which is given by Prince Myshkin in The Idiot, and at the moment of execution the proceedings were halted and the sentences commuted to hard labour in Siberia.

Dostoyevsky desperately wanted to write a novel about a ‘good’ man, but feared he was not up to the task

In 1863 Dostoyevsky travelled abroad and met Mlle Suslova, whom he subsequently married. He became addicted to gambling, which plunged him into debt, and it was his second wife, Anna Grigoryevena who helped him out of his nancial difficulties. He returned to Russia in 1873 and died there in 1881. His most important works were Notes from the Underground (1864), Crime and Punishment (1865–66), The Gambler (1866), The Idiot (1869), The Devils (1871) and The Brothers Karamazov (1880).

Dostoyevsky faced gargantuan problems when writing the book. He went through at least eight plans and many variations of each plan. Just before submitting the first part to his publisher, he destroyed most of what he had written and virtually started writing the novel again. It was written in Geneva, Vevey, Milan and Florence, between bouts of gambling, grinding poverty and recurrent epileptic fits.

After four years in a Swiss clinic where he was treated for epilepsy, Prince Myshkin returns by train to St Petersburg. On the journey, he meets Parfyon Rogozhin with whom he strikes up a friendship and who tells him about the beautiful Nastasya Filippovna, with whom he is in love.

On arriving in Petersburg, the prince, penniless and bedraggled, goes to find a distant and wealthy relative, Mrs Epanchin. She and her husband and their three daughters befriend this strangely naive and sickly character, and he goes to lodge with General Epanchin’s secretary, Ganya. Ganya wants to marry Aglaia, one of Mrs Epanchin’s daughters, mostly for her money, but is also involved with the notorious Nastasya Filippovna who is living under the protection of Totsky, a man she does not love. Prince Myshkin pities this neurotic and emotional woman and, during a bizarre incident at her birthday party, offers to marry her. Instead, she runs off with Rogozhin who also turns up at the party. Later, when Nastasya leaves Rogozhin, he swears to kill Prince Myshkin, as he is convinced that Nastasya is in love with him.

Prince Myshkin becomes the victim of an extortion attempt, but when he successfully refutes the charges, he offers to give money to his accuser, thus confirming Mrs Epanchin’s view that he is ‘an idiot’. Meanwhile, Aglaia falls in love with Prince Myshkin and, after hiding her feelings at first, she is eventually engaged to him. At a party to celebrate the betrothal, Prince Myshkin commits the ultimate social blunder of having an epileptic fit. Aglaia and Nastasya strike up a correspondence, and Aglaia asks Prince Myshkin to visit Nastasya with her. After a hectic and turbulent argument, Nastasya faints, Prince Myshkin runs to her aid and Aglaia, feeling rejected, flees and refuses to see Prince Myshkin.

Nastasya agrees to marry Prince Myshkin, but at the very last moment, she is swept away by Rogozhin. Prince Myshkin pursues them to Petersburg. After a long search, he finds Rogozhin and although he fears for his life, nothing could have prepared him for the final brutal end. Even then he is still able to forgive, but at a very high price.

Dostoyevsky desperately wanted to write a novel about a ‘good’ man, but feared he was not up to the task; in the initial plan Myshkin was a proud and demonic figure. Dostoyevsky’s notebooks show an author desperately in search of a subject through countless changes of plot and characterisation, but it was in its seventh plan that he finally found his ‘beautiful’ Idiot. However, the character retains layers of ambiguity that remain from the complicated process of his creation. His humility can be seen as overbearing and, in the end, destructive and Myshkin is finally left devoid of being: a demented idiot. His epilepsy is also crucial. It is both his salvation and a limitation; it prevents him from following his ideas through completely, and from being taken as a fully participating member of the society in which he finds himself. He is both part of the world, and yet part of another metaphysical plane, revealed to him at the onset of a seizure. So baffling and opaque is the character of Prince Myshkin that he embodies the whole range of human existence, and readers will puzzle over him and the true meaning of this book for many years to come.