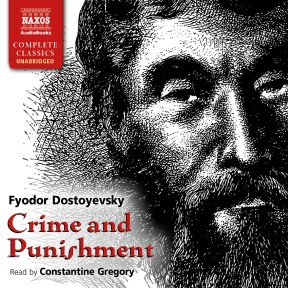 A century after it first appeared, Crime and Punishment remains one of the most gripping psychological thrillers. A poverty-striken young man, seeing his family making sacrifices for him, is faced with an opportunity to solve his financial problems with one simple but horrifying act: the murder of a pawnbroker. She is, he feels, just a parasite on society. But does the end justify the means? Rodion Romanovitch Raskolnikov makes his decision and then has to live with it. Dostoyevsky, in masterly fashion, contrasts the comedy and tragedy of life in St Petersburg with the anguish and turmoil of Raskolnikov’s inner life.

Almost a century and a half after it first appeared, this classic psychological crime novel is still widely read and studied. Set in St. Petersburg, the main character, Rodion Romanovitch Raskolnikov decides to murder a pawnbroker to whom he is indebted. He justifies his action because he sees her as just a parasite on society and tests his belief that murder is permissible in pursuit of a higher purpose. However, for him the result is months of turmoil and anguish. Narrator Constantine Gregory’s experience as an actor, dialogue coach, and ‘voice’ serves him well here. He has more than 20 years’ experience in all these capacities on international projects with many major film directors and stars from Danny Boyle to Terry Gilliam and with actors such as Anthony Hopkins, Nicole Kidman, George Clooney and many others. Constantine is excellent when voicing laughter and drunkenness and conveys the suffering of the characters poignantly. His interpretation is dramatic and very accessible in this dark and depressing novel. I found his voicing of Raskolnikov not distinctive enough. Still, this is an excellent reading for listeners new to this classic and for listeners familiar with the book, Gregory’s reading provides a unique experience.

In July 1865, Fyodor Dostoyevsky, a middle-aged author of some minor achievement, signed a contract with a publisher to produce a novel by November 1866. The contract included – given Dostoyevsky’s fecklessness – punitive penalties in the event of the writer failing to honour the agreement. At once, he ran off with his advance to meet his mistress in Wiesbaden, and lost the money on the roulette wheels. This was typical: his career was driven by an assiduous courtship of poverty – which in Russia at that time could be fatal. It was, in a sense, Russian roulette. In desperation he tried everything he could. It was at this point that the idea behind Crime and Punishment came to him: an idealistic young man, trapped by poverty, murders a loathsome old pawnbroker. The completed novel was published in 1866, the first of a series of masterpieces by himself and Tolstoy which would make the Russian realistic novel a genre comparable in depth and scope with Greek tragedy and Elizabethan drama.

Dostoyevsky was born in 1821, the son of a doctor. After graduating as a military engineer, he became a full-time writer and enjoyed almost immediate success with his novel Poor Folk. However, the works that followed were not reviewed so favourably, and his career was due to come to an untimely end when, in 1849, he was arrested and the following year condemned to death for conspiring against the Tsar. A few minutes before he was due to be shot, he and his associates received a reprieve, and he was sent to Siberia for four years. This traumatic experience seems to have led to a revulsion against radical politics – which he came to see as a criminal offence against God and the Russian soul – and to a belief in the spiritually regenerative power of suffering. It was Dostoyevsky’s own crime and punishment and it provided the essential fuel for the novels which established and maintained his reputation until his death in 1881.

The extreme nature of Dostoyevsky’s own character and experience, which included a history of epileptic fits, gave him an unparalleled insight into the wilder shores of human life. And the world of Crime and Punishment is certainly an extreme one in which a gripping psychological thriller quite naturally takes place amidst comedy and even farce. At the same time, the novel is a horribly prophetic one. The most terrible crimes of the twentieth century have undoubtedly been the result of just such idealistic theories – in which dubious means justify the ends – as ensnared Dostoyevsky in his youth and Raskolnikov in the novel.

Dostoyevsky’s philosophical position is therefore one which specifically defies a reasoned analysis towards a neat formulaic conclusion. Nor can any amount of psychological analysis of his characters unlock the secret workings of their being. His philosophical insights still leave us to contemplate the ultimately intractable nature of human motivation. It is this fact that makes Dostoyevsky’s novels – the most deeply Russian of Russian novels – works of comprehensive imagination and universal appeal.