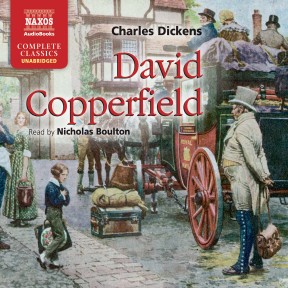 Recognised as one of the greatest works of English fiction, David Copperfield tells the story of a young man, from his painful childhood, through chance, tragedy and adventure, to self-knowledge and happiness. It includes some of Dickens’s most vividly memorable characters. The cruelly saturnine Mr Murdstone; the redoubtable Betsey Trotwood; the charismatic Steerforth; the ever-so-’umble Uriah Heep; the magnificently spendthrift Mr Wilkins Micawber; the spiteful Miss Dartle; the faithful Traddles; and scores more – all are part of a story that is by turns enchanting, enthralling, comic and moving. 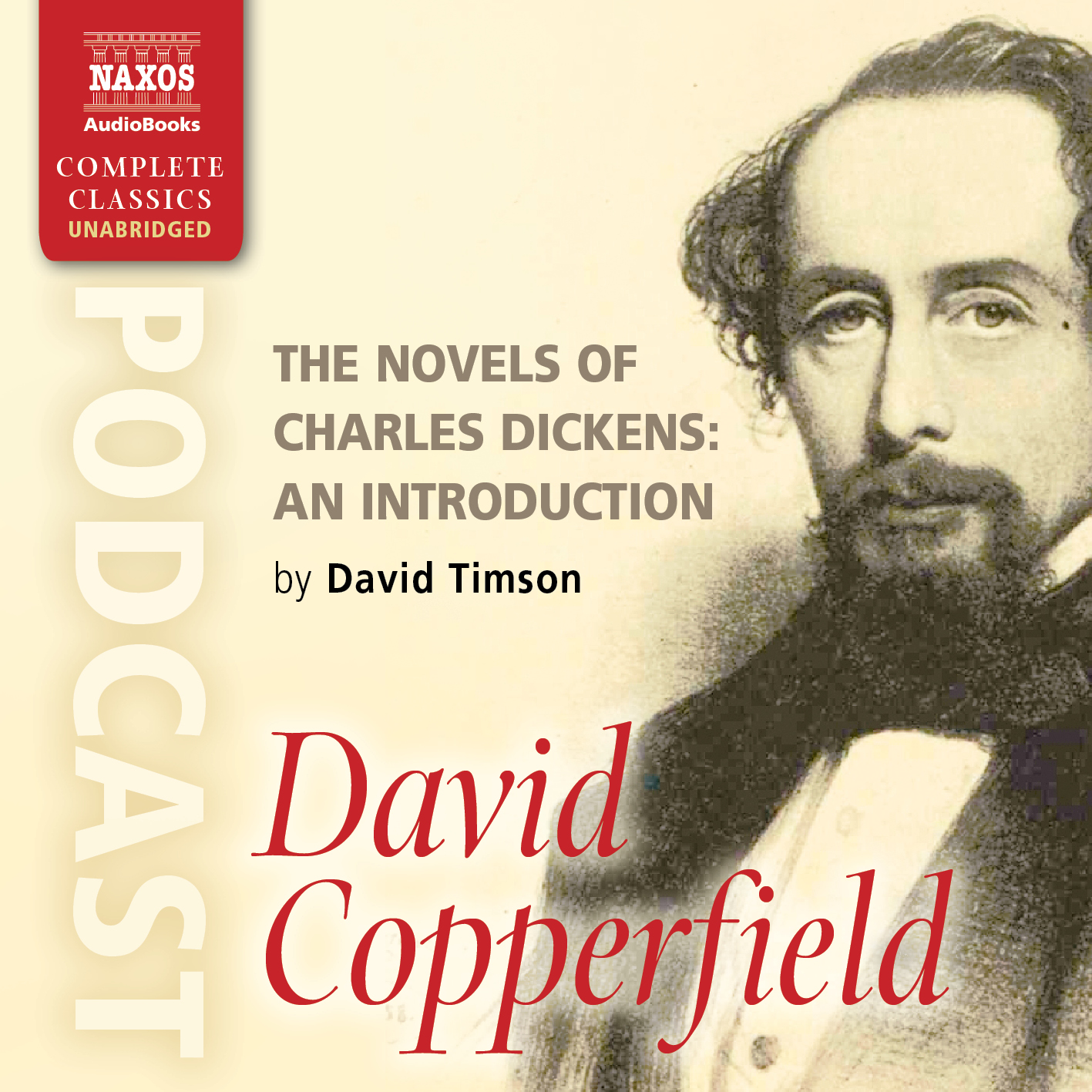 David Copperfield (The Novels of Charles Dickens: An Introduction by David Timson)

This much-loved novel was, by Dickens’ own admission, his ‘favorite child’. It is easy to see why, with its colourful characters ranging from the repulsive Uriah Heep to the endlessly improvident Micawbers, and dominated throughout by the moving story of David’s search for a family and a home.

When Dickens’s last unfinished book, The Mystery of Edwin Drood, comes out in May, Naxos will have recorded all of his novels unabridged, totalling 440½ hours of incomparable entertainment by the world’s greatest storyteller. Without the tributes and mass coverage of his bicentenary, I might have forgotten just how great a writer he is, hence my 2012 mission to become reacquainted with Dombey, Rudge, Nickleby, Chuzzlewit, Pickwick – the whole gang. David Copperfield was my introduction to Dickens and, in a way, to audio. Sister Agnes de Sales reading it aloud after supper in the convent as we darned our socks may not have been as affecting as Nicholas Bolton’s Mr Peggotty a-searching through the whole wide world for to bring back Little Em’ly, his darling niece, but it regularly reduced us to tears. Thus encouraged we moved on to Great Expectations, Hard Times et al. for ourselves, but that was a long time ago. If you’ve lost the Dickens habit, be patient. It takes a little while to adjust to his unhurried pace, the leviathan sentences, the digressions, the repetitions. ‘Oh my lungs and liver no! Oh my eyes and whiskers, no! Oh my legs and…’ etc, roars the terrifying second-hand clothes dealer in Chatham when 10-year-old Davey (penniless, hungry and running away from a wretched life in London to look for his only living relative in Dover) tentatively suggests that 18 pence is a fair price for his jacket. Don’t give it to him, for God’s sake, you want to scream, don’t trust him, he’s a rogue – but of course he does and sits outside on the doorstep all day until he gets the money. Well, some of it. Bullied, beaten, cheated, put upon – will our poor, trusting, irritatingly innocent hero never be free of the Steerforths, the Heeps, the waiters who snaffle his dinner, the carriers who run off with his goods? Of course he will, because there are as many decent, heartwarming Mr Dicks and Dr Strongs, especially in David Copperfield, as there are crooks. Naxos does cheaper abridged versions of all 17 books, but they’re just snacks. You need a proper dinner.

Probably any well-trained actor can make a good thing of Uriah Heep. Still, Nicholas Boulton’s Heep is miraculously visual. You’ll remember that in addition to being poisonously “’umble,” Heep writhes a good deal. Boulton somehow makes his voice sinuously whiney, such that you actually see Heep coiling one horrible leg around the other while he smarms somebody. Still, it was Boulton’s Betsy Trotwood that completely undid me. At her first cry of strangled outrage,”Janet! Donkeys!” I laughed out loud in the garden and startled the dog. If you haven’t read Copperfield since school, you’ll be surprised. The sentimentality seems worse than ever, but Dickens’s eccentrics are even more shrewdly conceived than you remember. Pair that with this glorious performance, and you’ve got audio heaven.

Probably any well-trained actor can make a good thing of Uriah Heep. Still, Nicholas Boulton’s Heep is miraculously visual. You’ll remember that in addition to being poisonously ‘umble’, Heep writhes a good deal. Boulton somehow makes his voice sinuously whiney, such that you actually see Heep coiling one horrible leg around the other while he smarms somebody. Still, it was Boulton’s Betsy Trotwood who completely undid me. At her first cry of strangled outrage, ‘Janet! Donkeys!’ I laughed out loud in the garden and startled the dog. If you haven’t read Copperfield since school, you’ll be surprised. The sentimentality seems worse than ever, but Dickens’s eccentrics are even more shrewdly conceived than you remember. Pair that with this glorious performance, and you’ve got audio heaven.

David Copperfield is often regarded as Dickens’s most autobiographical novel. There are many good reasons for this. The principal character’s initials are the author’s, reversed; Dickens had written a part of his life story shortly before he wrote David Copperfield; there is definitely something of his father in the character of Mr Micawber; and there are several specific elements that draw directly on his own experiences. It was also his first book with a first-person narration, and the combination of the intimate narrative ‘I’ and the detailed recollections is more than a little suggestive.

All this, however, overlooks the most crucial distinction: Dickens was a writer. He transformed rather than mirrored; he fabulated rather than recorded. He told truths about Victorian society and he illuminated human nature with unforgettable characters. But he did this through fiction, melding imagined elements with detailed observation. This applied as much to his own life as to the lives of those he knew, met or just happened to notice. Although he constantly mined his own life, only parts of it were subjected to the kind of imaginative analysis that ended up in his fiction; he glossed or ignored the stranger and perhaps more compelling elements.

Dickens was
driven by an
urge to earn
and never be
idle, as much
as by his
creativity

The son of a Navy clerk, he was born just outside Portsmouth and moved to another naval town, Chatham, in 1816. For the next few years he was enormously happy, especially in the company of books, and was given some formal education to encourage what was already a keen mind. It is not pushing speculation too far to suppose that he saw his adult self enjoying the fruits of this intelligence, energy and generous potential. This is one of several reasons why the sudden slump of his family’s finances when they moved to London caused a profound and essentially incurable wound. The move was brought about because of changes in the Navy’s structure, but the result was that his father ran out of money and Charles stopped going to school. The fact that one of his sisters continued her education stung him; but when his father was imprisoned for debt, Dickens was dealt a truly staggering blow.

He was sent to work in a filthy blacking factory near the river. It was not merely the humiliation of having a father in a debtor’s prison; it was not merely the long, miserable hours of manual labour; it was not merely having to walk miles alone, at the age of 12, through a slum area of a city to try to earn enough to pay for basic essentials: it was the crushing of all his life’s hopes, beliefs and expectations that Dickens suffered. It was as if he had been abandoned, as if all his potential was devalued, as if he as a person simply did not matter. The streets through which he walked were filled with plenty of people whose lives were harder and far more wretched than his, and he was only there for a year or so; but he was forever marked by a sense of having been forsaken.

On his father’s release, Charles went back to school and then started his professional life as a clerk in a solicitor’s office. He moved on to journalism (as his father had done), learned shorthand extremely quickly, and became a parliamentary reporter who was renowned for his speed and accuracy. His energetic delight in language now found a new ally in his strikingly perceptive observations and imaginative vigour. He began to write sketches of people and places that he knew, and by 1836 had his first collection published. That year also saw the publication of The Pickwick Papers, a novel that appeared – as would all his later works – in serial form, and the phenomenal success of which brought Dickens immediate celebrity. It also indicated another facet of his genius: comedy. The great humanity of Dickens’s writings is as much in his delight in foibles, frailties and idiosyncrasies as it is in his indignant fury at injustice. In less than three years, he also published Oliver Twist and Nicholas Nickleby, creating a lasting mythology and some of the greatest characters (heroes, villains and comic) in all English fiction.

Dickens was driven by an urge to earn and never be idle, as much as by his creativity. He travelled widely, in Europe especially, and in the late 1850s he started doing readings all over the country in popular but increasingly demanding performances. These contributed to his physical decline, although his determination to carry on with them even when unwell was indicative of the obsessive work ethic that perhaps did more damage.

He was married and had children – 10 in all – but the marriage was not a happy one for very long. Catherine never shared his intellectual curiosity or had his verve; and Dickens would have been exhausting to live with. He had a deep fixation with an idealised notion of woman (pure, sisterly) that was irremediably at odds with real life as a father. These issues were exacerbated by the fact that Catherine suffered terribly from post-natal depression, or something very similar, which must have made so many motherhoods almost unbearable for her. She and Dickens separated after 22 years, in part because their life together had become untenable, and in part because he had met Ellen Ternan, a young actress who was appearing in one of his many amateur productions. Dickens managed to keep this relationship largely secret, and the nature of it has never been established clearly.

He edited magazines and continued to write stories, travel journalism, sketches, articles and novels, the latter including Bleak House, Hard Times, Great Expectations, A Tale of Two Cities and Our Mutual Friend. David Copperfield was published between 1849 and 1850. Dickens was such a celebrated author that the idea of writing his life story had already been suggested, and he wrote an autobiographical fragment for his friend John Forster. This coincided with a sense that his still-to-be-written novel should involve a reminiscence, an exploration of the past, and perhaps thereby a reinvention of it for himself: a fictionalising of what was still a painful and largely secret subject. But all the references in David Copperfield that can be pinpointed to Dickens’s own life – his favourite books, his learning shorthand, his time as a clerk at Doctors Commons’, his success as an author – are still fictions. They are templates for invention, or starting points for broader imaginings, changed by the restless and seemingly endless power of his imagination into something like believable myths. His heroes and villains are completely recognisable but never truly real; his fictional themes had a broader purpose than mere reality can effect.